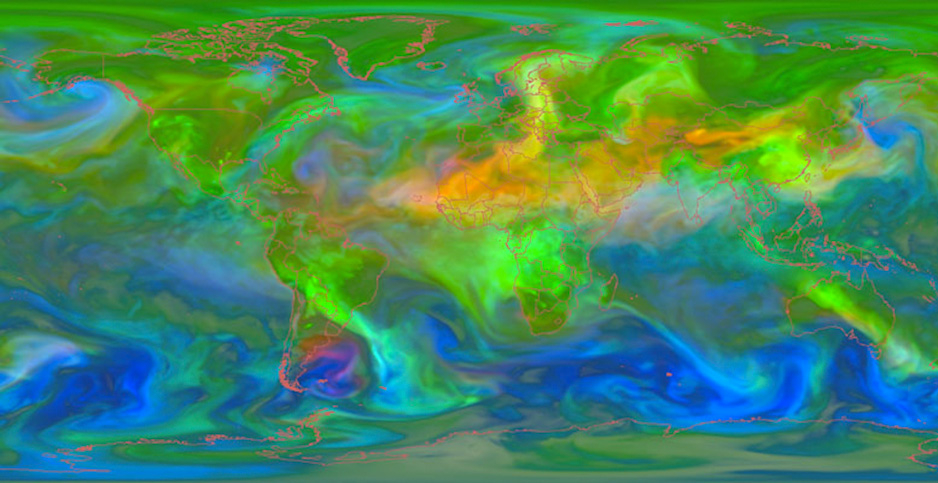 One of the world’s biggest efforts to study climate change is underway — and it’s happening behind the screens of powerful computers.

Research teams around the world are working to develop the next generation of climate models. Known as the Coupled Model Intercomparison Project, or CMIP, it’s a coordinated, international effort to create suites of ever-more-advanced models for use in climate research. There’s a new effort every few years or so, typically timed around an upcoming report from the Intergovernmental Panel on Climate Change.

The latest generation of models — CMIP6 — is in progress right now.

So far, teams around the world have completed about 40 new models. Dozens more could be on the way. And the results to date are promising — scientists are hopeful that many of the new models will better simulate certain aspects of the earth system.

But one perplexing trend is emerging.

A number of the new models are more sensitive to greenhouse gas emissions than the last generation. In other words, they predict higher warming for a given level of emissions.

If the more sensitive models are accurate, that would suggest future warming might be more severe than scientists previously thought.

For now, scientists aren’t sure. Some recent studies suggest that the models might be inflating climate sensitivity. But many experts caution that it’s too early to say for sure.

It’s become one of the most intriguing quirks about the development of CMIP6.

"There are these large uncertainties, and we can’t exclude high-end values or very low-end values," cautioned Zeke Hausfather, director of climate and energy at the Breakthrough Institute in Oakland, Calif. "But at the same time, it doesn’t agree with a lot of the evidence we have."

The issue revolves around a thorny concept known as equilibrium climate sensitivity, or ECS. ECS refers to the amount of global warming scientists should expect if the Earth’s carbon dioxide concentrations doubled their preindustrial levels.

Prior to the Industrial Revolution, atmospheric carbon dioxide levels hovered around 280 parts per million. So a doubling would amount to about 560 ppm. Concentrations today are more than 400 ppm and steadily climbing — so the concept is growing more relevant every day.

The trouble with ECS, though, is that it’s notoriously difficult to narrow down because there are so many different factors that affect the way the Earth warms.

Forests, oceans and other natural landscapes all absorb some carbon from the atmosphere. The way they respond to future environmental changes can make a big difference in how quickly the Earth continues to warm.

Vanishing snow and ice can also alter the reflectivity of the Earth’s surface and change the rate at which the planet warms.

Clouds play a major role, too. In fact, they’re probably the biggest single uncertainty about future warming, according to Mark Zelinka, an atmospheric scientist at Lawrence Livermore National Laboratory.

That’s because clouds can either increase or decrease global warming, depending on their characteristics. And they’re notoriously difficult to model.

They’re probably the "main driver of the differences in climate sensitivity" from one model to the next, Zelinka noted.

Over the years, most models have exhibited an ECS of anywhere from 1.5 to 4.5 degrees Celsius. That range has stayed consistent for decades now — it’s highly unusual for a model to fall outside those boundaries.

So scientists were surprised when the new CMIP6 updates started rolling in. Out of about 40 models submitted so far, at least 14 have an ECS higher than 4.5 C, according to records kept by Zelinka as the new models come in.

A few even rise above 5 C, with the highest clocking in at an eyebrow-raising 5.6 C.

Scientists aren’t totally sure what’s causing the higher sensitivity, and it’s not necessarily the same thing from one model to the next. But the representation of clouds probably has something to do with it.

In recent years, improving cloud simulations has become a major priority for the modeling community. And scientists have made some strides in their understanding of cloud processes.

For instance, researchers have learned that clouds often contain a lot more liquid water than previously suspected — even when they form in subfreezing conditions. The amount of liquid in a cloud, versus the amount of ice, has a major influence on how much sunlight the cloud reflects and whether it warms or cools the Earth below.

In many of the newer models, "there’s been an effort to increase the amount of liquid water in clouds that are below freezing," Zelinka said.

And that, in turn, may affect the way clouds are influencing the models’ climate sensitivity.

For now, there are still at least 26 models that fall within the usual range. But 14 out of 40 is a substantial chunk — enough to spark an investigation into what’s going on.

"It’s certainly going to cause a headache for climate scientists," Hausfather said. "More doomist folks saying, ‘It’s the end of the world, we’re going to have 7 degrees of warming’ — or more dismissive folks saying, ‘Oh, these models are all bogus.’"

The evidence so far

One of the world’s most highly respected climate models is the Community Earth System Model, built by scientists at the National Center for Atmospheric Research in Boulder, Colo.

The team has recently produced an update for CMIP6 — CESM2, a more advanced follow-on to the original model. Like its predecessor, it does a great job simulating the Earth’s present-day climate.

But its ECS is among the highest of any of the new models, at a whopping 5.3 C.

It caught the attention of researcher Jiang Zhu, a postdoctoral fellow at the University of Michigan. He decided to test the model with the help of colleagues Christopher Poulsen and Bette Otto-Bliesner.

The three researchers used the new model to simulate an ancient period in the Earth’s history known as the Early Eocene Climatic Optimum, occurring about 50 million years ago. Analyses of ancient sediments, ice cores, fossils and other preserved records have given scientists some useful insight into what the Earth was like at the time, including its climate and carbon dioxide concentrations.

Scientists know it was a warm period in the Earth’s history. But when they ran the model, it simulated temperatures far too high.

Since the simulations didn’t match the observed records, the researchers believe the model’s climate sensitivity may be unrealistically high. They described their findings in an editorial published last month in the journal Nature Climate Change.

"I think the implication is that if we use this model to project future climate, we probably will have too much warming," Zhu told E&E News.

Other recent studies have taken slightly different approaches — but they come to similar conclusions.

One paper published in March compared simulations from some of the new CMIP6 models to the global warming that’s actually occurred in recent decades. The paper found that the models tend to overestimate the Earth’s recent warming — meaning their sensitivity may be too high.

In general, Hausfather said, models that do the best job simulating the Earth’s recent climate history tend to have a sensitivity that falls within the usual, lower range.

An additional paper, published last month, demonstrated that these models can be recalibrated — or forcibly adjusted — to match the recent warming observations. When this adjustment is made, their projections for future warming are lowered, bringing them more in line with the previous generation of models.

Put together, the evidence so far seems to suggest that the most sensitive models may be too sensitive. If that’s true, it would suggest that there’s something about the new models that needs to be compensated for — like a feedback process, perhaps related to the representation of clouds, that’s coming on too strong.

But the matter is hardly settled, according to Hausfather. For the time being, scientists can’t totally rule out high-end outcomes in climate models.

"There’s not much evidence to support the very high climate sensitivity models," Hausfather said. "That doesn’t necessarily mean they’re wrong. There’s still huge uncertainties in a lot of these analyses."

It’s still early days in the CMIP6 process, with only 40 new models having been submitted. Experts expect that number to climb to 100, at least.

At the same time, the IPCC’s next big report is already in progress. The sixth assessment report will rely heavily on simulations from CMIP6 models — and that means it’s worth considering the best way to use the high-sensitivity models.

Even if some models really are too sensitive — a question that’s still far from settled — it doesn’t mean they aren’t useful. Some of them may have significant advancements in the way they simulate other aspects of the Earth’s climate system.

"Global mean surface temperature is not the end-all be-all of climate change," Hausfather pointed out. "Regional temperatures matter, regional precipitation changes matter, regional changes in atmospheric circulation matter, sea-level rise. There’s so many other things you can evaluate these models on besides climate sensitivity and global average temperatures."

In any case, the whole point of having a large suite of climate models available is so that scientists don’t have to rely on just one to answer all their questions. Different models have their own strengths and weaknesses.

Scientists often run the same kind of simulation on multiple different models precisely so they can see how the responses differ. Then they present their findings as a range, or as the average of the model results, to communicate that there’s some wiggle room among the possible outcomes. So having a few models with a higher-than-expected climate sensitivity doesn’t necessarily mean that all future climate projections will suddenly look more extreme.

And as long as there’s uncertainty about the future, it’s scientifically useful to evaluate worst-case scenarios, according to Zelinka.

"It’s good to have a diversity of models at this point, because we don’t actually know what the sensitivity is," he said.

In the coming months, research groups are likely to publish more studies evaluating the performance of the new CMIP6 models. As these studies accumulate, scientists will get a better grasp of the strengths and weaknesses of various models.

"Unpacking what happens in a single model takes maybe half a year," said Reto Knutti, a climate scientist at the Swiss Federal Institute of Technology in Zurich. "Now if you want to do that for all of the models at the same time and comparing, then we’re talking a year or two to sort of figure out what’s going on. We’re really just scratching the surface."

That means the next IPCC report may be coming a bit too early to say which models would be best used for which purposes, he added.

Still, to Knutti the debate about sensitivity isn’t a problem but an opportunity. It allows scientists the chance to explore what’s working and what’s not working in the latest models, to figure out why, and to make improvements in the next generation.

"It’s a huge opportunity scientifically," Knutti said. "I think it’s great. Because we have kind of pushed the boundaries of what we thought was plausible, and now we have an opportunity to figure out whether it is in fact plausible — or if not, why not."