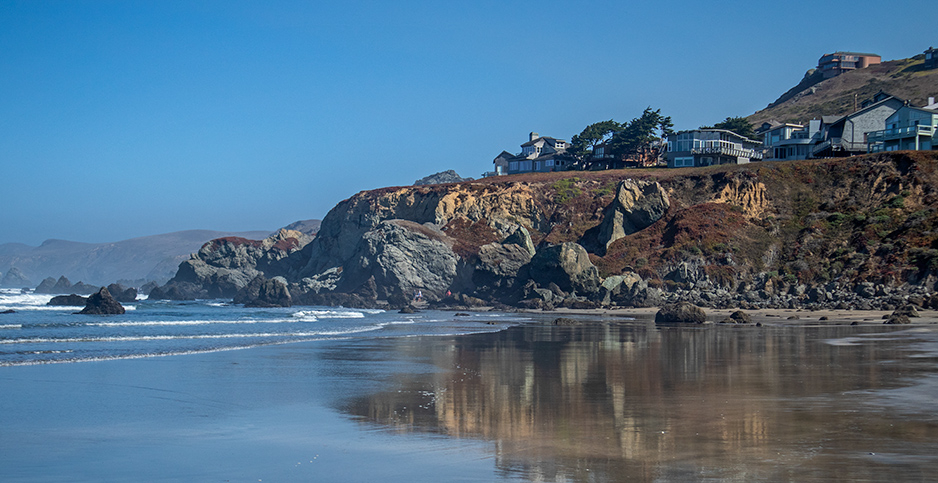 Houses perch near the ocean in Marin County, Calif., where cliffs are eroding rapidly. The county is suing oil companies over climate damages. Peter Bennett/Citizen of the Planet/Newscom

Climate nuisance cases across the United States saw a flurry of activity this summer.

Cities, counties and states are waging these battles against big oil companies that they say knowingly played a role in detrimental climate impacts. As of now, judges have mostly been tasked with deciding whether the cases belong in state or federal court.

While not all the legal claims are the same across the cases, they are all grounded in a form of nuisance law, meaning they seek damages for interference in the use of public or private property.

The plaintiffs — which include cities and counties in California, Colorado and Maryland as well as the state of Rhode Island — say that their taxpayers shouldn’t have to foot the bill for hotter cities and rising sea levels.

Although the cases haven’t seen much back-and-forth on the merits of their claims, the U.S. localities can now boast a string of victories on procedural grounds.

Six of the eight nuisance cases — some of which include multiple consolidated lawsuits from state courts — have made their way to circuit courts, where they are awaiting various appeals. Four of those six cases are pending appeal because district judges threw the cases back to state court.

The majority of these climate nuisance complaints had been removed to federal court after they were filed on the state level. Energy companies — including Exxon Mobil Corp., Chevron Corp., Royal Dutch Shell PLC, BP PLC, ConocoPhillips and Suncor Energy Inc. — say the complaints raise federal questions that shouldn’t be litigated by state judges.

And there’s a strategy to the companies’ insistence on federal jurisdiction. The Supreme Court ruled in 2011 that parties can’t bring federal common law complaints against companies over their emissions because the Clean Air Act gives EPA the authority to decide whether to regulate greenhouse gases.

In an early setback for localities, Judge William Alsup, a Clinton appointee from the U.S. District Court for the District of Northern California, ruled that a consolidated case from San Francisco and Oakland, Calif., belonged in federal court and eventually dismissed it entirely.

The cities, counties and states, on the other hand, have been fighting to keep their lawsuits in state court, where their complaints against companies face less of an uphill battle thanks to state nuisance law.

The past few months saw a trend in favorable rulings for the localities. District judges from California, Rhode Island, Baltimore and Colorado all threw cases back to state court.

And judges in two of those cases — Baltimore and, as of this week, Rhode Island — ruled that the lawsuits will not be put on hold while oil companies appeal their decisions to toss the cases from federal court. This means those cases will continue to be litigated on a state level while notoriously slow-moving circuit courts work through their appeals.

Here’s where the U.S. climate nuisance cases are now:

San Francisco and Oakland originally filed complaints for the "people of the state of California" asking a California state judge to make oil companies pay an "abatement fund" that would "provide for infrastructure in San Francisco necessary for the People to adapt to global warming impacts such as sea level rise."

After that case was removed by the oil companies to Alsup’s federal district court, the judge famously asked for a climate change "tutorial." He decided the cities’ public nuisance claims raised federal questions and eventually scrapped the cases.

San Francisco and Oakland are appealing the dismissal and are fighting to have the case resurrected in state court (Climatewire, July 3).

After oil companies removed these six suits brought by California localities to federal court, Judge Vince Chhabria of the U.S. District Court for the Northern District of California tossed them all back to state court.

Chhabria, an Obama appointee, disagreed with Alsup, writing in his order that federal removal wasn’t appropriate because the original claims aren’t governed by federal common law.

"Simply put," he wrote, "these cases should not have been removed to federal court on the basis of federal common law that no longer exists." The state court, though, stayed the litigation while an appeal plays out in the 9th Circuit, where the cases are consolidated under San Mateo.

In a small victory for oil companies, the same panel of judges will hear both the San Francisco and Oakland appeal as well as the San Mateo remand appeal on the same date, though in separate sessions. No date has been set for oral arguments, but they could be scheduled between December and February 2020.

Lawyers for San Mateo objected to the 9th Circuit hearing both sets of cases on the same day, arguing the move would "unduly delay the disposition of the Chhabria Appeals" (Climatewire, July 19).

New York’s case was filed in federal court and dismissed. The appeal is fully briefed; oral arguments are scheduled for Nov. 22 (Climatewire, March 8).

In a meticulously written opinion in June, Judge Ellen Lipton Hollander of the U.S. District Court for the District of Maryland tossed Baltimore’s nuisance case back to state court. She based her decision on the "well pleaded complaint rule," which stipulates that there has to be a federal complaint on the face of a complaint in order for it to be removed to federal court.

"It may be true that the City’s public nuisance claim is not viable under Maryland law. But, this Court need not — and, indeed, cannot — make that determination," Hollander, an Obama appointee, wrote in her ruling.

Judges in Rhode Island and Colorado have cited Hollander’s ruling in granting requests to move cases to state court. But oil companies continue to argue that Baltimore’s case brings up "uniquely federal interests" that should be litigated by a federal judge, "regardless of the labels that Plaintiff has affixed to those claims."

Hollander also ruled that the state case in Maryland will be allowed to proceed even though oil companies asked to halt it while they appeal the remand order. Oral arguments for the appeal have been proposed for October or December (Climatewire, Sept. 5).

Rhode Island’s nuisance case, too, will continue on in state court during the appeals process. Chief Judge William Smith of the U.S. District Court for the District of Rhode Island, a George W. Bush appointee, remanded it to state court this summer after oil companies had removed it to federal court (Climatewire, July 23).

San Miguel County, Boulder County and the city of Boulder in Colo.

This Colorado case — which only targets Exxon Mobil and Suncor Energy — was remanded to state court earlier this month by Judge William Martínez of the U.S. District Court for the District of Colorado, an Obama appointee. Oil companies appealed the remand and say they will file a bid to halt proceedings during the appeal process by Friday. Proceedings moved forward in August after they were put on hold following the death of Senior Judge Wiley Daniel, who had been overseeing the case in the district court (Climatewire, Sept. 6).

Commercial fishermen brought this action to hold fossil fuel companies "accountable for acute changes to the ocean off of California and Oregon that resulted … in prolonged regulatory closures of the Dungeness crab fisheries" (Climatewire, Nov. 15, 2018).

The fishermen’s case was removed to federal court and assigned to Judge Chhabria. He ordered a stay pending the 9th Circuit resolution of the San Francisco, Oakland and San Mateo consolidated cases.

After this Washington case was removed to federal court, Senior Judge Robert Lasnik of the U.S. District Court for the Western District of Washington, a Clinton appointee, ordered a stay until a decision is reached in the San Francisco and Oakland cases.