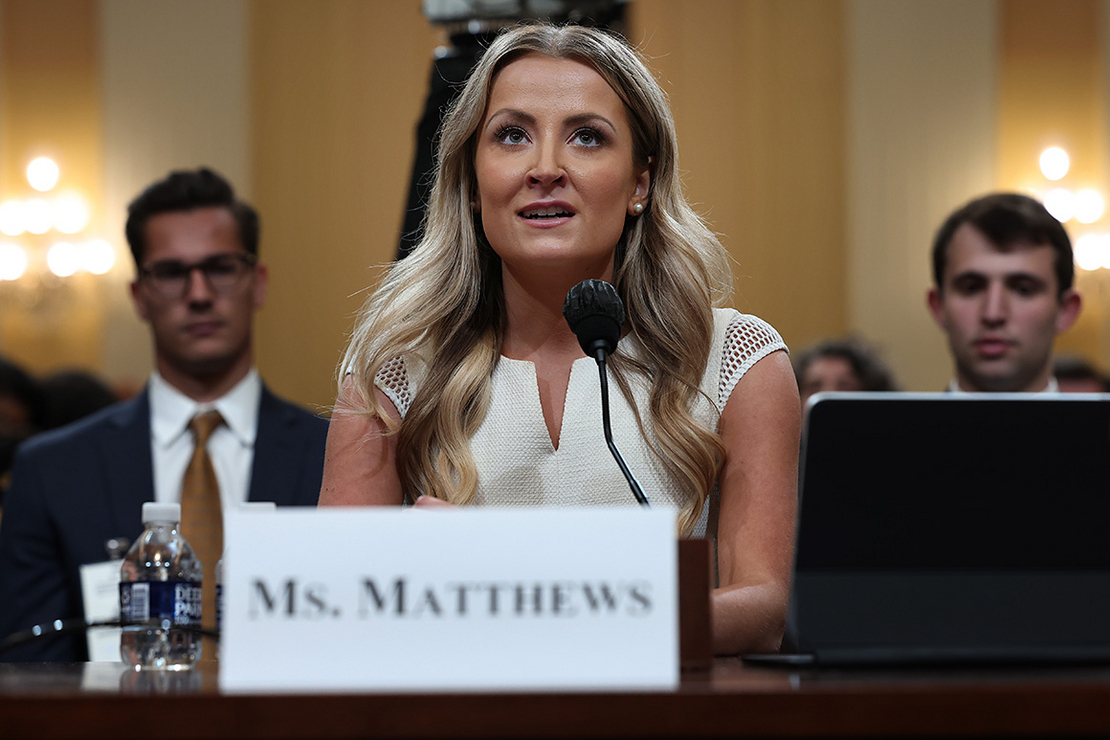 Sarah Matthews, the spokesperson for Republicans on the House Select Committee on the Climate Crisis, testified against former President Donald Trump last night before the committee investigating the Jan. 6, 2021, attack on the Capitol.

In response, a Twitter account for the House Republican Conference, chaired by Rep. Elise Stefanik (R-N.Y.), said about Matthews: “Just another liar and pawn in Pelosi’s witch hunt.”

The message, later deleted, included Matthews’ own past social media posts expressing pride for working in the Trump White House.

A spokesperson for the House GOP Conference said that “the tweet was sent out at the staff level and was not authorized or the position of the conference and was therefore deleted.”

Zack Roday, the former communications director for the House Energy and Commerce Committee, where Matthews once worked as press secretary, defended her on Twitter last night.

“She’s a pro. And a good person. This tweet should come down and an apology should be issued,” Roday wrote.

Matthews, who resigned from her White House post as deputy press secretary on the night of Jan. 6 in protest of Trump’s handling of the Capitol attack, described how the president refused for hours to call off the riots.

Matthews told the panel that former White House press secretary Kayleigh McEnany told her on Jan. 6 that Trump “did not want to include any sort of mention of peace” in a tweet he was being pushed to send.

Matthews also expressed deep frustration with a tweet from Trump on Jan. 6 suggesting Vice President Mike Pence lacked courage for not agreeing to halt the Electoral College count underway at the Capitol. That led to some Capitol rioters calling for hanging the then-vice president.

“For him to tweet out the message about Mike Pence, it was him pouring gasoline on the fire and making it much worse,” said Matthews, who called for a “peaceful transfer of power” upon resigning.

About four months after leaving the White House, Matthews landed her current job as the GOP communications director for the climate panel, whose ranking member is Rep. Garret Graves (R-La.).

While at odds with Trump over his behavior on Jan. 6, as a spokesperson for climate crisis committee Republicans, Matthews regularly sends out statements and blog posts from Graves and other members of the GOP backing many of the former president’s environmental policies and bashing the Biden administration’s climate goals.

“If the goal is really emissions reductions, President Trump stopped President Obama’s EPA Clean Power Plan regulation on the utility sector before it went into effect, and then emission reduction targets were not just met — they were exceeded over a decade sooner and with substantially lower utility bills for American families,” said one recent release attributed to Graves.

Matthews, 27, spent several years working on Capitol Hill before leaving in 2019 to work on Trump’s reelection campaign then subsequently at the White House.

The Ohio native and Kent State University graduate worked as press secretary for the Energy and Commerce Committee from 2018-2019 and before that as a digital manager for the House Homeland Security Committee.

As last night’s hearing ended, Rep. Liz Cheney (R-Wyo.), the vice chair of the Jan. 6 Committee, said Matthews and other witnesses would be remembered for their “bravery and honor.”