Climate permeated the race, overcoming denial and a virus 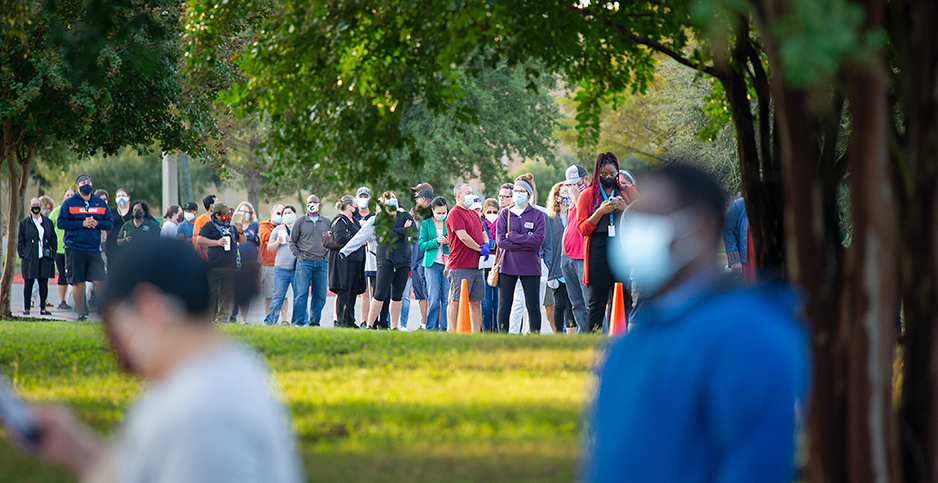 The Democratic presidential nominee had been hammering climate on every stop of the campaign’s home stretch, and Biden’s final speech Saturday in Michigan was written to highlight his clean energy plan and the jobs it would bring Detroit.

But Biden barely got two sentences into his climate message when he interrupted himself: Had the crowd heard President Trump’s latest comments?

"Today, he said he is a — I think he said a ‘perfect physical specimen,’" Biden said, waiting a beat before crossing himself. "Maybe that’s why he thought he was able to write off $70,000 on his taxes, because he needed special hair care. Seriously!"

Biden’s riff — he eventually steered himself back to clean energy — offered a snapshot of how climate has permeated the 2020 election even as other issues have dominated the daily news cycle.

Voters say climate action is more important than ever, and both campaigns have responded accordingly. Biden retooled his general election campaign around a $2 trillion climate plan, while Trump mostly dropped his overt climate denial to instead campaign on saving fossil fuel jobs.

That attention has been uneven.

At times, hurricanes, wildfires and other natural disasters steered the candidates toward climate politics — just as the coronavirus pandemic, protests over racial injustice, an economic crisis and a Supreme Court opening pulled attention elsewhere.

Climate still found its way into those other issues, though, hinting at its staying power as a future electoral wedge.

On the coronavirus, scientists said the pandemic showcased the costs of disregarding experts and neglecting distant-seeming threats, like sea-level rise.

As the economy slumped, investors started speaking up more loudly about the long-term vulnerabilities of oil and gas firms, while economists pointed to the potential stimulus effect of the government building clean energy infrastructure.

In the aftermath of protests against racist policing, environmental justice activists highlighted how pollution disproportionately harms communities of color.

And during the Supreme Court confirmation hearings, some of the sharpest scrutiny of now-Justice Amy Coney Barrett came from her casting doubt on climate science.

Few voters would naturally connect those issues to climate — but Biden has labored to make the connections explicit, especially for his "Build Back Better" plan, said Danielle Deiseroth, climate data analyst at Data for Progress.

Biden used his Democratic National Convention speech to enshrine climate change as one of the "four historic crises" facing the United States. His campaign aired three different climate ads on TV in the election’s final month. And from the debate stage, he delivered a strident message against the oil industry.

"It’s taken them a while to come around to it. But I’m really glad that, at least in the closing message, climate is playing such an important part," Deiseroth said, explaining that polling shows climate as one of Biden’s biggest advantages over Trump.

The turn toward climate politics hasn’t been easy for either of the septuagenarian candidates.

Biden won the Democratic nomination without major environmental backing. He then made the unusual move of pivoting his general election campaign toward a more progressive climate plan, scaling up to $2 trillion over four years instead of $1.7 trillion over a decade, along with a host of more aggressive goals, like eliminating greenhouse gas emissions from the power sector by 2035.

Biden’s team framed the move as a response to the pandemic’s changing circumstances. But he also acknowledged that he didn’t earn much environmentalist support during the primary — a sore point for the former Delaware senator, who takes credit for the first climate legislation passed by Congress in the 1980s.

"It’s just the way this campaign has been run from the beginning about me, in the primaries, that [my climate record] just never got traction," Biden said on a recent episode of "Pod Save America," the podcast hosted by Obama administration alumni.

He sparred with climate activists so often that the shaky cellphone videos of their clashes became a regular feature of the early primary states.

Biden later co-opted some of those progressive critics by inviting leaders of the left — including New York Rep. Alexandria Ocasio-Cortez (D) and environmental activists — to help expand his plans.

But that rope-line footage of Biden trying to win over climate hawks during the primary has become a mainstay of Trump’s campaign. Jumbo screens at Trump rallies play videos of Biden’s remarks, and the president’s campaign often amplifies them on social media.

"You don’t have to take my word about his record; just take a look at this magnificent tape that we made for you," Trump said at a recent Pennsylvania rally.

Biden has proposed banning hydraulic fracturing on public lands; his climate plan would still allow it on private land. But Trump’s attacks have forced Biden on the defensive, largely due to one state that both campaigns consider decisive: Pennsylvania.

The final New York Times/Siena College poll of Pennsylvania, released yesterday, found that 52% of Keystone State likely voters who responded supported fracking, including a majority of independents. Even a majority of Democrats either supported it (26%) or didn’t know or wouldn’t say (28%).

"Trump moved Biden on the issue. He boxed him in," said Don Levy, director of the Siena College Research Institute.

"Clearly, in our poll, there are plenty of people who said that they’re supporting Biden in Pennsylvania who also said that they support fracking," he said.

One small sign that Trump considers fracking the key to his reelection: After a Biden rally last weekend in Pittsburgh, Trump’s campaign attacked him for appearing with "the anti-fracking activist Lady Gaga." Trump himself amplified that message with a 2 a.m. tweet.

The Trump campaign typically has shied away from public displays of outright climate denial, which some within the campaign consider an unnecessary liability.

But away from the campaign trail, his administration is setting the stage for a more sustained assault on climate science.

Worried about the political backlash, the White House last year shelved an adversarial review of the National Climate Assessment. Trump has promised its architect, Princeton University physicist William Happer, that he would resurrect it after the election.

In recent months, the White House has installed a climate science denier and prominent climate science critic to top positions at NOAA. Outsider advisers say the administration plans to create its own version of a National Climate Assessment that emphasizes doubt and downplays humanity’s role in global warming. They’re hoping it’s the first step of a direct challenge to the endangerment finding, the scientific foundation of climate regulation policy.

Trump’s climate denial has emerged in unscripted moments during the campaign. Most notably, during his visit to California last month at the height of its record-breaking deadly wildfires, he told state officials that temperatures would get "cooler."

At other times, Trump has sought to avoid talking about climate change. In the presidential debates, Trump repeatedly pivoted from climate questions to fracking, air and water quality, and forest management.

In the first presidential debate, when Trump sought to interrupt and talk over Biden, some observers noted that the president dropped that tactic when the discussion turned to climate.

"It’s pretty hard to leave Trump speechless. But it’s clear that what we saw in the debate is, on climate, he doesn’t have much to say," said Maggie Thomas, who was a climate adviser on the presidential campaigns of Washington Gov. Jay Inslee (D) and Massachusetts Sen. Elizabeth Warren (D).