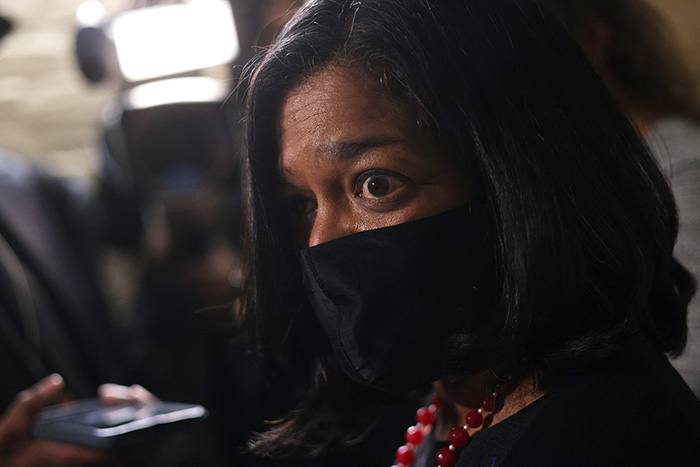 House Democratic leaders continued to project outward confidence last night they’ll be able to reach an agreement with the Senate by Thursday on a massive spending package, despite a litany of outstanding policy differences related to climate and continued clashes over the current $3.5 trillion top-line number.

In a closed-door caucus meeting, however, House Speaker Nancy Pelosi (D-Calif.) delivered a sobering reality check: They may not meet the deadline to close the deal, which progressives say they need in order to shore up the votes to pass a separate $1 trillion bipartisan infrastructure measure.

Democrats, Pelosi said, must be prepared for that possibility, blaming the standoff over the existing price tag as the reason why negotiations have been moving slower than anticipated.

“House and Senate Democrats — we are completely in sync: we are going to have the same bill. We are not going to pass a bill … that won’t pass the Senate,” she told members, according to a source familiar with her remarks. “And that’s why we have to come up with a number. But we’re not there yet.”

Pelosi is holding out hope for some sort of breakthrough in the coming days that she can show progressives: some framework to assure them a vote on reconciliation is close. But it’s still unclear whether progressive House Democrats would agree to vote on any reconciliation bill that isn’t first passed by the Senate — a timetable that won’t be possible this week given procedural and logical constraints.

“It would be tough,” Congressional Progressive Caucus Chair Pramila Jayapal (D-Wash.) said last night, while continuing to argue that House action on a Senate-passed bill would be the only way to ensure progressive interests are protected through the legislative process.

“If we don’t have an actual bill that is completely agreed upon and voted on [by the Senate], then any number of things could happen,” she explained. “People could argue about some small provision for another five months and hold it up.”

Pelosi and her allies are banking on other progressives taking a weaker line or at least being able to convince them to soften their demands. Rep. Ilhan Omar (D-Minn.), the whip for the Progressive Caucus, told reporters she wants to see a deal struck on reconciliation before voting on the bipartisan bill but left the door open for the House to vote first on that agreement.

Rep. Jared Huffman (D-Calif.), chair of the House Natural Resources Subcommittee on Water, Oceans and Wildlife, agreed: “I don’t think it has to be bill text, but it’s got to be something very clear and public and specific.”

Meanwhile, many Democrats emerged from the caucus meeting yesterday prepared to take Pelosi at her word that although there are no guarantees, conversations with the Senate are going well.

“I got the impression that everything was a go by Thursday,” House Ways and Means Chair Richard Neal (D-Mass.) told reporters.

Rep. Peter DeFazio (D-Ore.), chair of the House Transportation and Infrastructure Committee, had a similar takeaway.

“She has a plan, she has a schedule and it’s all going [according to] what she predicted two weeks ago [that] I thought she couldn’t do,” he said.

DeFazio has a vested interest in seeing the bipartisan infrastructure package pass on Thursday: it contains a critical reauthorization of surface transportation programs that are set to expire at the end of the month. 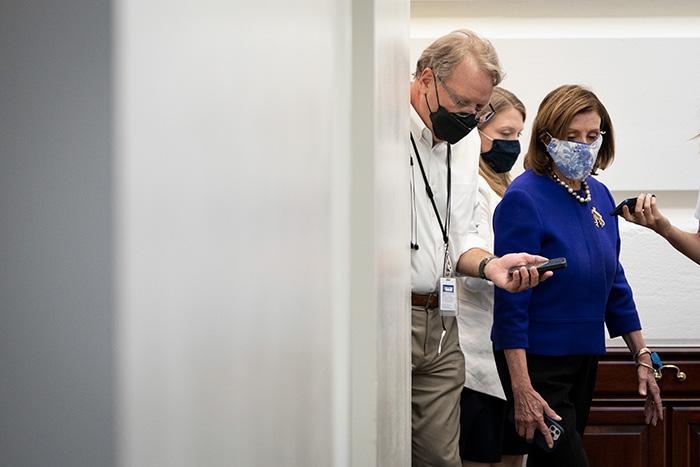 Pelosi is still working to position herself as a strong advocate for both pieces of legislation. Today she is set to headline an event highlighting the reconciliation bill’s provisions to “tackle the climate crisis, address environmental justice and invest in America’s clean energy future.”

Participants will include House Democrats facing tough reelection fights in 2022 — moderates who will likely speak to the need to pass both bills to save the planet rather than the more hardcore progressives who have snubbed the bipartisan bill as insufficient in this regard.

Rep. Kathy Castor (D-Fla.), chair of the House Select Committee on the Climate Crisis, will appear at the event as well and plans to make this case, adding that she believes President Biden is “dotting the I’s and crossing the T’s” on an agreement with House and Senate leaders.

However, Democrats in both chambers are still working to reach a consensus on including a Clean Electricity Payment Program in the reconciliation bill, which many progressives say is necessary for addressing the climate crisis.

The matter of carbon pricing is also outstanding in bicameral talks, along with instituting a carbon border adjustment tariff. Both policies face headwinds within the administration because they could run afoul of Biden’s campaign pledge not to raise taxes on individuals making less than $400,000.

But Sen. Chris Coons (D-Del.), a confidant of Biden’s, confirmed both policies remain on the negotiating table.

“I think in combination they would be a powerful tool to both bend the curve on climate change to show our alignment with our closest allies globally, and if constructed correctly — which I think the proposals are — still meet President Biden’s commitment not to raise taxes on those making less than $400,000,” Coons told E&E News yesterday.

“That has really pushed it up the priority list for the caucus,” he said in an interview yesterday.

It’s not clear, however, that Wyden has made much progress convincing Neal, his House counterpart, on carbon pricing. Although the Ways and Means chair didn’t rule it out yesterday, his panel’s portion of the House’s reconciliation bill is silent on the issue, and the two lawmakers have vastly different visions for how to extend and expand various clean energy and tax vehicle incentives.

“They should do a markup on those things. That’s all,” Neal said yesterday when asked about Wyden’s carbon pricing push.

A major challenge in the coming days will be finding a way to lower the reconciliation bill’s price tag to appeal to Democratic moderate Sens. Joe Manchin of West Virginia and Kyrsten Sinema of Arizona without sacrificing key provisions that could peel off support elsewhere.

To address these deficit concerns and bring down the overall cost, Democrats are considering imposing income limits or similar means testing to qualify for a number of provisions — including electric vehicles.

“All the EV issues are on the menu,” Wyden told E&E News yesterday. “Obviously it’s an issue for the caucus.”

Wyden noted that the Senate adopted a nonbinding amendment by Sen. Deb Fischer (R-Neb.) during the August debate on the budget resolution that would have imposed a means test for qualifying for the EV tax break, with Manchin, Sinema and Sen. Mark Kelly (D-Ariz.) voting with most GOP senators for the plan (E&E Daily, Aug. 11).

In response, Rep. Dan Kildee and Sen. Debbie Stabenow, both Michigan Democrats, crafted a proposal that was included in the House’s budget reconciliation package that would allow up to $12,500 in tax credits for EV purchases under certain conditions — but also bar Americans making more than $400,000 annually from receiving the break.

Whether this becomes the mechanism for lowering reconciliation’s top-line number is still an open question. Two Democratic senators who support EVs said yesterday they were unfamiliar with the push to link the credit to a means test — but they didn’t rule it out.

“It really depends on what the line is, what the cutoff is, but I’m certainly open to taking a look at that,” Sen. Gary Peters (D-Mich.) said.

“I would have to look at the details to see if it has a positive impact on what we are trying to achieve at the end of the day,” she said.