Climate policy for cars could hurt the poor, advocates say 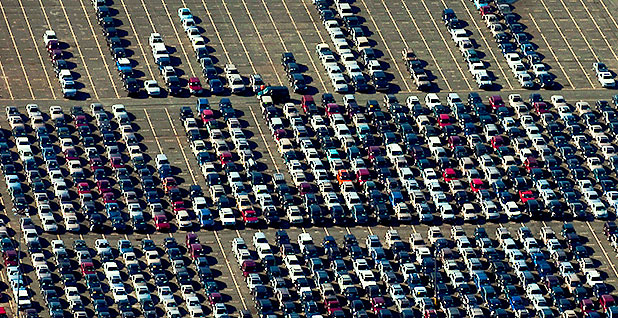 Cars are seen parked near the Port of Baltimore. Aero-Imaging, Inc/Newscom

Environmental justice advocates worry a proposed cap-and-invest program for cars won’t help the low-income and minority communities that have historically borne the brunt of air pollution from vehicles.

They’re demanding the architects of the program, which would cover nine Northeastern states and the District of Columbia, take a more "specific and intentional focus" on equity.

Otherwise, "the program is likely to exacerbate the divide between the eco-haves and eco-have-nots," a coalition of eight advocacy groups wrote in a letter delivered to the program’s leaders at a workshop in Baltimore this week.

At issue is the proposed Transportation and Climate Initiative, which would cap greenhouse gas emissions from the transportation sector in the region. The cap would get lower and lower each year, meaning less and less pollution would be allowed (Climatewire, July 10).

Regulated entities would have to purchase allowances at auctions for each ton of carbon they emit. Proceeds from the sale of carbon allowances would go toward state projects that further reduce transportation emissions, such as programs to boost the deployment of electric vehicles.

TCI leaders insist they have prioritized equity from the start. They held a May workshop in Newark, N.J., on the topic.

"From the outset, the Transportation and Climate Initiative has been committed to ensuring the regional program we develop is designed to benefit communities that have had too little access to transportation options and too much exposure to pollution and other burdens," said TCI Chairwoman Katie Theoharides, the secretary of the Massachusetts Executive Office of Energy and Environmental Affairs, in an emailed statement to E&E News.

But the environmental justice groups are concerned that the program won’t end up achieving meaningful emissions reductions in communities already overburdened by pollution.

"The green economy has to be for everyone, not just some people," said Michelle Romero, national director of Green for All. "There are ways in which states could design a program that exacerbates inequality."

Along with Green for All, groups signing the letter are the Baltimore Transit Equity Coalition, Chispa, Pittsburghers for Public Transit, BTB Coalition,Transport Hartford Academy at Center for Latino Progress and two chapters of the NAACP.

Some research has shown that market-based mechanisms for reducing emissions have the unintended consequence of concentrating pollution in the places where it’s cheapest to pollute.

The study also found that some California neighborhoods with higher proportions of minority and low-income residents had seen increased emissions under the program, as it was cheaper for companies to continue polluting at facilities in those neighborhoods.

The study demonstrated that "there are problems with a traditional cap-and-invest approach to reducing emissions," said Fernando Cazares, national director of Chispa, a Latino community organizing program with the League of Conservation Voters.

"We believe TCI should be very carefully tailored so that it has targets to reduce greenhouse gases and other criteria pollutants in these communities that are already impacted," Cazares said.

Still, it remains unclear whether the study has direct implications for TCI. The authors primarily focused on stationary sources of air pollution such as power plants and factories. TCI is focused on mobile sources like cars and trucks that can travel between different neighborhoods.

The environmental justice groups also worry that states could pay lip service to the Transportation and Climate Initiative while simultaneously advancing highway projects that stand to ratchet up pollution.

They point to Maryland as a prime example.

Maryland Environment Secretary Ben Grumbles has been a leading proponent of TCI. He previously told E&E News: "We are deeply engaged and committed to working together with the other states to design a cap-and-invest program for emissions from combustion of on-road transportation fuels. We’re making significant progress."

But the Maryland Department of Transportation, which has also participated in TCI planning discussions, is currently pursuing highway-widening projects that critics say will increase emissions.

Under Gov. Larry Hogan (R), MDOT is proposing to widen Interstate 495 and I-270, two highways in the D.C. region. Studies have shown that adding lanes to highways results in more congestion and emissions, not less. The phenomenon is known as induced demand, and Los Angeles is often cited as a case study.

"What we know from research and demonstration is that this kind of widening program increases congestion, instead of reducing congestion. Instead of citing this science, the governor and his administration are moving ahead in an attempt to circumvent an environmental impact study on this project," said Samuel Jordan, president of the Baltimore Transit Equity Coalition.

"We have the governor advancing this project and giving lip service to TCI elsewhere," Jordan said. "That in itself is the height of cynicism."

Theoharides, the TCI chairwoman, said program leaders would welcome further engagement with "frontline communities" in the coming months, as the program gets closer to launching.

At the workshop in Baltimore this week, program leaders announced the formation of a TCI Equity Taskforce to develop a series of draft principles.

"As we continue to develop the details of this proposal, we will be taking seriously the recommendations in this letter," Theoharides said. "We are grateful to these groups for their engagement in this process, and continue to welcome input and participation from frontline communities throughout the design process."