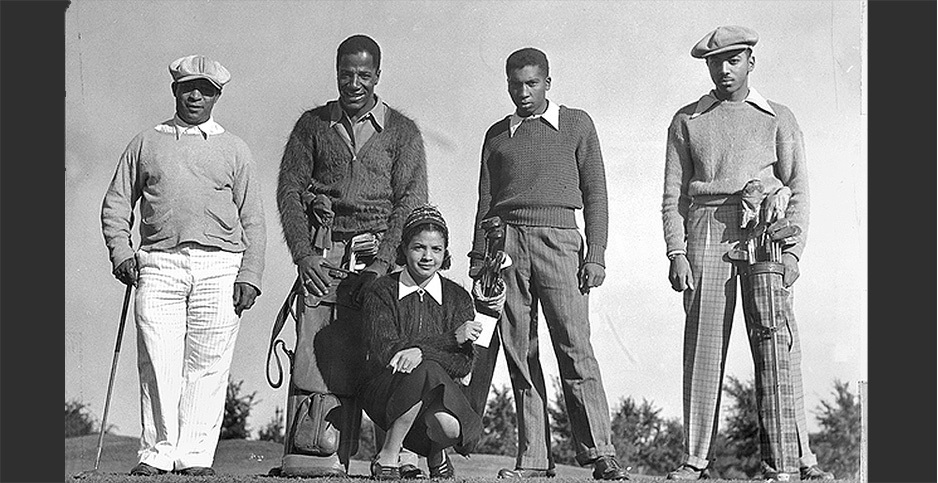 MINNEAPOLIS — Black people faced overt discrimination on this city’s public golf courses until the 1950s. Now climate change is elevating golf’s racist past once again.

Hiawatha Golf Course, one of the first racially integrated 18-hole courses in Minnesota, is being swamped by intensifying floods. It was submerged twice in the last eight years, and extreme downpours will strike the course with rising frequency, experts say.

In response, the Minneapolis park board is considering turning half the course into a series of natural features that would allow water to flow as it did before the course was built from a wetland in the 1920s.

To supporters, the plan is a rescue mission for a climate-threatened golf course. But others view it as an infrastructure project that threatens to perpetuate systemic racism in a city bracing for the murder trial of a white Minneapolis police officer who killed George Floyd 10 months ago.

"Our park infrastructure was designed and built in the 1930s and ’40s, and it was a very different climate than the one we have now," said Tyler Pederson, a planner with the Minneapolis Park & Recreation Board overseeing the proposed golf course project.

If the $44 million reconfiguration plan is approved by the Minneapolis park board, nine holes would be converted into swales and wetlands to hold and filter hundreds of millions of gallons of seeping groundwater and polluted runoff.

Black golfers and some park board members, however, are chafing at the prospect of seeing a course that embodies progress for the civil rights movement sliced in half.

"It’s really odd that now we want to talk about Mother Nature and the environment and doing the right thing, but for hundreds of years, we haven’t done the right thing for Black folks," Londel French, one of three Black members of the park board, said during a recent public meeting.

Commissioner and board Vice President LaTrisha Vetaw said she opposes the changes until the board can ensure it will preserve the legacy of Black golfers. That recognition has to be more than "just a plaque," she said.

A reckoning on race

The project is being proposed as Minneapolis reckons with institutional racism following the killing of Floyd last Memorial Day on a street corner less than 2 miles from Hiawatha Golf Course. Jury selection in the second-degree murder trial of Derek Chauvin, the former officer, begins today.

For some Black people, golf courses in predominantly white cities and suburbs are reminders of the explicit racism they faced before and during the civil rights movement — and beyond.

In their seminal book on golf in the Jim Crow era, sociologists Marvin Dawkins and Graham Kinloch note that Black athletes began breaking color barriers in U.S. professional sports in the 1950s, except in golf.

"[T]his was not the case in professional golf, which continued to maintain segregation policies perpetuating the stereotype that African Americans were suited only to caddie roles in support of white players," they wrote.

Segregated golf was more prevalent in the South, but many Northern and Eastern cities also perpetuated racism by limiting Black golfers to particular courses and tournaments, barring them from clubhouses, and even scheduling tee times that kept Black and white golfers from playing a course at the same time.

Brendan Shane, climate director for the Trust for Public Land, which ranks public park systems annually under a "ParkScore Index," said research shows persistent inequity in U.S. public parks, not only for recreational opportunities but also in park size, location and ease of access.

"Parks in lower-income and communities of color are often the ones who see the least investment. They’re the ones getting squeezed," Shane said in an interview. "And of course, the problem runs headlong into the reality of increasing heat and increasing floods."

While climate change is being felt on all golf courses, Shane noted that urban public courses are often in floodplains or areas that are less desirable for other types of development.

The Langston Golf Course on the Anacostia River in Washington, D.C., opened to Black golfers in 1939 and was one of a handful of integrated public courses nationwide, according to the National Park Service, which owns the course.

Other urban courses are in hurricane zones, like the Golf Club in Audubon Park in New Orleans and the Gus Wortham Park Golf Course in Houston. Officials at both of those courses have tried to flood-proof fairways and greens. In St. Louis, the former Riverview/North Shore golf course simply closed after years of repeated flooding and disrepair.

Pederson, the park planner, described the flooding Hiawatha as "chronic," noting that "the climatic trend is to become warmer and wetter" in the Twin Cities region and across Minnesota.

Addressing flooding on the Hiawatha course became a top priority in 2014 after a record rain event inundated the 18-hole course, causing major damage to fairways, greens and landscape features. A second major flood in 2019 undid many of the repairs performed after 2014.

The city closed and repaired the course over two golfing seasons and began pumping standing water off the course to maintain its playability. Between 2016 and 2020, the city pumped on average 325 million gallons off the course annually.

French and Vetaw, the Minneapolis park commissioners who challenged the Hiawatha master plan, did not respond to interview requests. But Pederson and some park commissioners argued that the plan seeks to preserve the course’s civil rights history while retaining golf.

Dawkins, who serves on an advisory committee to the USGA Golf Museum, said the project could celebrate civil rights milestones by associating the course with Solomon Hughes, a professional Black golfer from Alabama who moved to Minneapolis in 1943. Hughes was instrumental in breaking barriers for Black golfers seeking equal access to public courses and tournaments, and he remains a major civil rights figure in golf nationally.

Other courses have also wrestled with histories of racial discrimination.

The Lions Municipal Golf Course in Austin, Texas, believed to be the first integrated municipal course in the South, was spared from a proposed redevelopment project in 2019 after outcry from Black golfers and others.

But the Hiawatha and Lions controversies differ in a key way, Dawkins said.

The Minneapolis board is seeking to mitigate flooding while preserving golf at the site. "These golfers want to play on an 18-hole course, and they should fight for that," he said. "But they should also be willing to compromise on the environmental issue. They can raise the ante by insisting the course be renamed for Solomon Hughes and honor the fight that Black golfers mounted against segregation."

‘Not just a golf course’

In developing the master plan, the park board hosted two public hearings on the course’s importance to Black golfers — as well as hearings on the undertold history of the Dakota people who occupied the area before white settlement and statehood in 1858. Comments about the proposal to shrink and reconfigure the course ranged from highly supportive to strongly opposed.

Harry Davis Jr., a lifelong Minnesotan and presenter at the hearings, said he believed the 18-hole course should be left alone and the proposed reconstruction money should be used to improve other inner-city parks.

"Hiawatha is an institution, not just a golf course," Davis said, according to notes from the hearing. He declined to be interviewed by E&E News.

Systemic racism against Black and Indigenous people, whose ancestors lived along the lakeshores that later became parks throughout the region, is a long-standing problem, said some commissioners who support the flood project. But they argue that weeding out racism and protecting park resources from climate change should be done in tandem and should not be viewed as competing interests.

Steffanie Musich is one of those commissioners. Her district includes Hiawatha Golf Course, which she described as a lake bed buried under century-old dredge material that has slowly sunk over the years, making it more vulnerable to water seepage and stormwater flooding.

"Our parks are at the end of the pipe shed for pretty much every stormwater pipe in the city," she said. "Hiawatha is the most talked-about example, but we have this problem across the entire system.

"The central theme around the Hiawatha master plan is balance," Musich added. "That means compromises are made by everybody. There are some people who don’t want any golf [at Hiawatha] and make it a completely natural park. That’s not an option. We are keeping golf."

Last year, the board committed to spend $220 million over 20 years to revive parks in low-income neighborhoods and communities of color, and foster greater inclusivity in recreational activities. The board also accelerated a 2019 initiative called "Parks for All" to refine its goals toward a more racially and ethnically diverse city.

The initiative recognizes that Minneapolis will become more multiracial and multicultural as climate change pushes people — in both the United States and other countries — away from coastal regions where sea-level rise and strengthening tropical storms are threatening hundreds of millions of people.

"Minneapolis could become an important destination for those forced from their communities in warmer, drier and coastal areas because it will see lesser impacts from these key climate change effects," the plan states. "As a result, Minneapolis will likely see not just an increase in the number of people of color, but also in the variety of different ethnic and racial groups."

Park commissioners say they recognize the challenges ahead. Board member Meg Forney, who is white, said in an interview that she initially supported retaining the 18-hole golf course at Hiawatha. But she changed her mind after having what she described as an "aha" moment with respect to climate change and its effects on parks. Now she believes they can coexist.