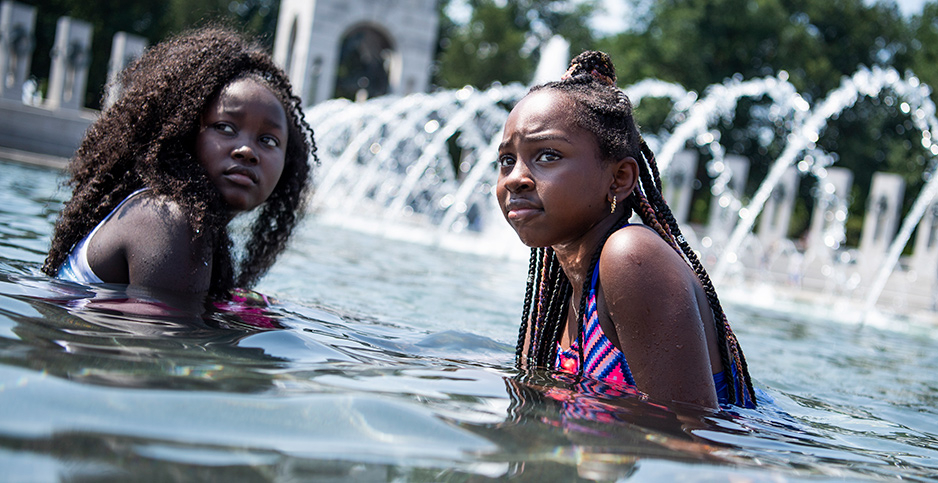 Lower-income residents and people of color are more likely to live in the hottest neighborhoods in cities across the country, putting them at greater risk of heat-related illnesses and death.

"Disparities in urban heat exposure as a direct result of urban planning and design, environmental racism, and the policies such as redlining … do in fact exist," said Angel Hsu, an environmental policy expert at the University of North Carolina, Chapel Hill, and lead author of one of the studies.

"And now we have the evidence and the quantitative data to show that these patterns are not isolated to case studies or ad hoc anecdotal evidence, but actually they’re widespread, pervasive and consistent."

The perils of city heat are well known. Urban centers are often significantly hotter than surrounding rural areas — by as much as several degrees in some cases.

It’s a phenomenon known as the "urban heat island effect." There are a variety of causes, not always the same ones from one city to the next. But it’s often a combination of less vegetation and denser populations, with closely set buildings and lots of dark surfaces that help trap heat.

That can mean different neighborhoods within the same city may be hotter than others.

Now, research increasingly suggests that residents of the hottest neighborhoods are often predominantly lower-income people and people of color.

Hsu’s study looked at 175 cities across the U.S., each with a population of more than 250,000. It compared urban summer heat and demographic data in each city, including race and ethnicity, age, and income.

In 97% of these cities, people of color were likely to live in hotter neighborhoods than white residents. On average, they were exposed to temperatures a full degree Celsius higher, or nearly 2 degrees Fahrenheit.

In 94% of these cities, a similar trend held true for households living below the poverty line.

When income was held equal, they found that people of color were still exposed to higher temperatures than white residents in more than half the counties.

These disparities appear to be linked to three main factors, according to lead study author Susanne Benz of the University of California, San Diego. Neighborhoods with higher population densities, less vegetation and more built-up areas tended to be hotter.

Around the country, disparities in neighborhood design are rooted in a long history of racist "redlining" practices and entrenched residential segregation.

Redlining refers to a discriminatory practice in which lenders refused to provide mortgages in neighborhoods with large minority populations. Although the practice was outlawed in 1968 by the Fair Housing Act, its effects remain apparent decades later.

These patterns haven’t changed much since the 1980s, suggesting that the difference in these communities "has existed for decades and has locked in these disparities," according to lead study author Allison Grant, an undergraduate student at the University of Mary Washington.

Grant’s study also found that heat disparities were linked to urban design. The hotter neighborhoods had greater numbers of roads and buildings than their cooler counterparts.

The three studies have not yet been published in journals, meaning they haven’t undergone a formal peer-review process. In general, urban heat inequalities have been less studied than other environmental inequalities, like exposure to pollution or toxins.

But the issue is gaining more attention as urban temperatures rise. And several other recent studies have come to similar conclusions.

A January study in the journal Climate, for instance, also found that redlined areas tend to be warmer than non-redlined areas in cities across the country (Climatewire, Jan. 21).

Hsu co-authored an earlier study, published last year in Environmental Research Letters, that looked at neighborhood-level data in 25 cities around the world. In nearly three-quarters of the studied areas, lower-income neighborhoods were exposed to higher heat than wealthier neighborhoods.

Heat-related illnesses kill hundreds of people across the U.S. each year, and these risks are expected to increase as temperatures climb. Studies suggest extreme heat events will become more frequent and more intense in the future and that more people will be exposed to severe heat waves (Climatewire, Aug. 18).

Solutions to neighborhood-level disparities vary from one place to the next, depending on the local climate and the city’s unique characteristics. In some places, planting more vegetation may help. Installing reflective surfaces on rooftops or roads, which can help beam sunlight away, is another potential tool.

"There’s not a one-size-fits-all solution to urban heat island management," Hsu said. "You have to consider where you are and what’s feasible."

But knowing where the disparities lie, and which communities are at the greatest risk, is the first step.

"Climate change is inevitable, and we are already seeing the impacts of it today," said Grant of Mary Washington. "But what we need to do now is figure out where these communities are struggling and what needs to be done to make them more resilient to the impacts of extreme heat."