Climate research raced forward as Trump turned his back 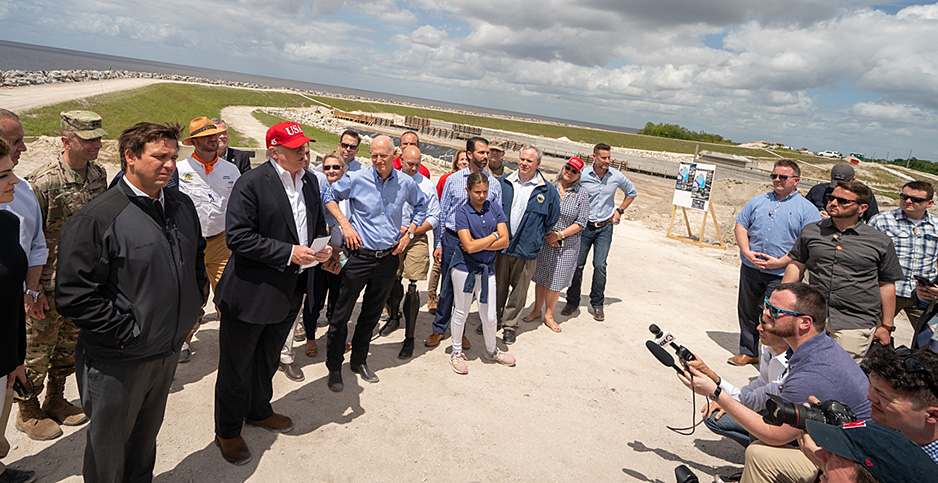 President Trump, in the red hat, talks to the press during a 2019 visit to Lake Okeechobee, Fla. Shealah Craighead/White House/Flickr

The Trump administration has spent four years consciously ignoring — and often working against — scientists’ efforts to raise the alarm about climate change.

In the wake of hurricanes, floods, wildfires and extreme heat, President Trump has continually questioned the science of global warming. A deep cynicism of scientists flavored his policy decisions, such as withdrawing the U.S. from a global climate agreement and unraveling dozens of environmental regulations.

Trump’s unchanging stance on climate is punctuated against the backdrop of historic disasters and momentous scientific strides that have occurred since he took office.

In just four years, scientists’ understanding of climate change has rapidly advanced. At the same time, the effects of rising temperatures are steadily intensifying in the U.S. and globally.

Warming around the world

In the U.S., the last four years have brought one climate-fueled disaster after another.

Trump’s first year in office, 2017, was marked by the catastrophic effects of Hurricane Harvey on the Texas coast and hurricanes Irma and Maria in Puerto Rico. All three storms rank among the five costliest storms in U.S. history, and studies have suggested that they were all influenced, to some extent, by climate change.

On the opposite side of the country, raging wildfires have plagued Western states each year Trump has been in office.

California’s fires alone burned more than 4 million acres in 2020, the largest area ever recorded and more than double the previous record. The August Complex Fire, which raged in and around the Mendocino National Forest in Northern California this summer, was the largest in the state’s known history and the first on record to burn more than a million acres, earning it the moniker "gigafire."

The previous record for California’s largest fire was also set under Trump’s watch, in 2018.

Trump has repeatedly pinned the blame for worsening wildfires on bad forest management. Wildfires are complex disasters, and it’s true that certain forest management practices can increase the severity of a blaze.

But scientists emphasize that rising temperatures and drought are making Western wildfires bigger and more destructive. In fact, research suggests that climate change has already been influencing the Western fire season for decades.

Intense rainfall and record-breaking floods have plagued other parts of the country over the last few years.

Parts of the Midwest and Great Plains region, including Nebraska, South Dakota, Wisconsin and Iowa, were hit by historic floods in 2019. Experts pointed to a snowy winter, followed by an unusually wet spring, as the culprit.

As the region continues to warm, scientists expect more precipitation and more severe spring flooding across much of the Midwest.

The past four years have brought a string of record-breaking climate events elsewhere around the world as well.

The rapidly warming Arctic, in particular, has become the poster child for global climate change in recent years. As the Trump administration has studiously averted its eyes, each year has brought new extremes to the far north, from record temperatures to historic melting in Greenland in 2019 to record-breaking wildfires in Siberia the last few years.

And throughout the rest of the world, temperatures are steadily rising. Each full year the Trump administration has been in office, from 2017 through 2019, has ranked among the top five hottest years on record.

As historic climate events make headlines around the world, scientists are also rapidly advancing their understanding of climate change.

The same disasters that have rocked the nation the last four years are getting easier to link to global warming. Scientists have made strides in a field known as attribution science, a type of research that investigates the extent to which climate change has influenced an individual weather event, like a hurricane or a heat wave.

As attribution science has advanced, researchers are discovering that certain climate events would never have happened at all in a world without human-caused warming.

In 2017, scientists published some of the first attribution studies suggesting that some extreme events wouldn’t be possible without climate change. These included record-breaking temperatures in 2016, extreme heat in Asia and unusually warm water off the coast of Alaska.

Multiple studies since then have come to similar conclusions about other events.

In polar science, recent studies have clarified just how quickly the world’s frozen places are melting away.

In the past four years, scientists have concluded that Greenland is now melting at least six or seven times faster than it was just a few decades ago. According to one recent study, its current melting is approaching its fastest rate in 12,000 years (Climatewire, Oct. 1).

Recent research has found that melting is speeding up in Antarctica, too. Scientists believe the melt rates there have tripled in just a couple of decades, and may have as much as sextupled since the 1970s (Climatewire, June 14, 2018).

Several major international polar expeditions have launched since Trump took office, bringing in data that will help scientists better understand the changes taking place in both the Arctic and Antarctica. These projects include contributions from U.S. scientists.

The International Thwaites Glacier Collaboration officially launched in 2018. A collaboration between U.S. and British science agencies, the ongoing project aims to investigate the changes taking place at one of West Antarctica’s largest and fastest melting glaciers. Thwaites Glacier is believed to be losing about 50 billion metric tons of ice each year.

Meanwhile, the MOSAiC Arctic expedition — a mission spearheaded by the Alfred Wegener Institute in Germany and involving collaborations from hundreds of scientists around the world — just concluded. The expedition spent a year collecting data on the climate system in the central Arctic.

More generally, scientists are honing their estimates of how quickly the world will warm in the future.

Earlier this year, a groundbreaking study claimed to have significantly improved scientists’ estimates of the Earth’s climate sensitivity, a measure of how much the planet will warm in response to a given increase in greenhouse gas emissions. One scientist told E&E News it was "the most important climate science paper that’s come out in several years" (Climatewire, July 23).

At the same time, research groups around the world have spent the last few years developing the next generation of global climate models. These models will allow scientists even greater certainty when making projections.

It’s an international effort known as the Coupled Model Intercomparison Project, or CMIP. Every few years, scientists work together to release a suite of updated models, which are then used to inform new reports from the Intergovernmental Panel on Climate Change. The newest CMIP models are still being submitted, but scientists say many of them are significantly more advanced than the older versions.

That said, research — including one notable study published last year — suggests that climate models have been doing a good job of simulating global warming for decades now (Climatewire, Dec. 5, 2019).

As scientists have improved their understanding of climate change, they’ve also started adjusting the way they communicate their recommendations to policymakers. In the last few years, experts have begun advocating for clearer benchmarks for global climate action.

Under the terms of the Paris Agreement, nations are working to keep global temperatures within 1.5 or 2 degrees Celsius of their preindustrial levels. Many recent studies have focused on the carbon budget for these targets — that is, exactly how much carbon the world can emit before overshooting its temperature goals.

But recently, experts have begun to suggest that the carbon budget may not be the most useful concept when it comes to promoting climate action. Instead, some have begun pushing for a net-zero timeline — a concrete time period over which global emissions must fall to zero.

That’s just what the IPCC presented in a much-anticipated 2018 report on the 1.5 C temperature target. The report — one of the biggest climate documents of the past four years — warned that global emissions must fall by half over the next decade, and hit zero by 2050, to avoid overshooting the target.

Whether 1.5 C is still within reach is a matter of debate. While it’s technically possible, many experts are skeptical that emissions can fall fast enough.

If not, that still leaves the Paris Agreement’s 2 C target to aim for. Success on that front will likely depend heavily on global action — and U.S. participation — in the next few years.