Climate rule gets muted response on the trail 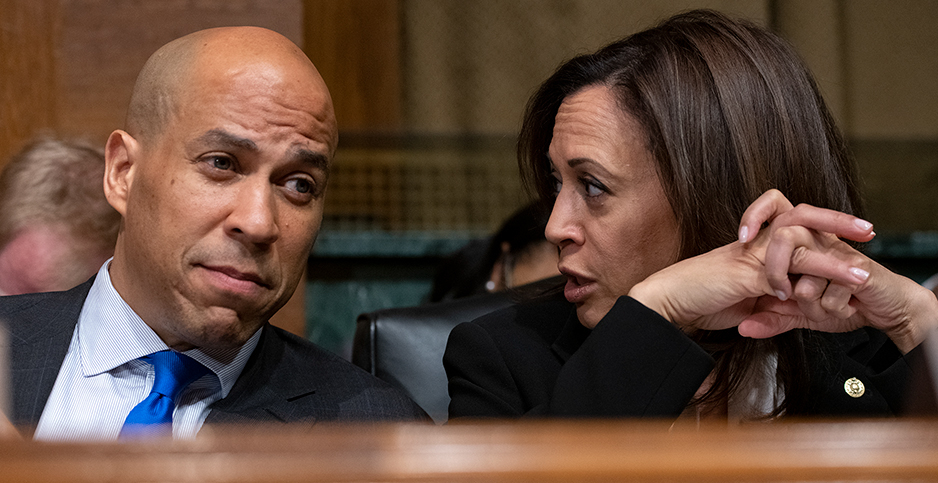 Sens. Cory Booker of New Jersey and Kamala Harris of California are among the Democratic presidential contenders who have commented on EPA's new climate rule. Ron Sachs/CNP/AdMedia/Newscom

President Trump’s new industry-friendly carbon rule for power plants was greeted with little fanfare among the field of Democrats hoping to run against him.

While eight of the two dozen 2020 hopefuls responded negatively to EPA’s Affordable Clean Energy rule, most reactions were published by candidates’ government offices, and very few explicitly promised to take action against the regulation if they are elected.

The muted response came despite climate change playing an unprecedented role so far in the 2020 race, with numerous candidates laying out detailed plans promising economywide transformations that would lead to net-zero greenhouse gas emissions, among other proposals.

But those plans would go far above and beyond the 32% emissions reduction envisioned by the Clean Power Plan, the Obama administration EPA rule that ACE replaces, and so far no candidate has promised only to reinstate the Obama rule.

By not condemning more strongly one of the most consequential actions the president has taken to dismantle climate policy, the Democratic candidates are skipping a potential opportunity to set themselves apart from Trump.

The candidates who have been silent on the rule since its Wednesday release include Joe Biden — who was vice president to Obama when he wrote the Clean Power Plan — Sen. Cory Booker of New Jersey, former Colorado Gov. John Hickenlooper and Rep. Tulsi Gabbard of Hawaii.

"The thinking has moved beyond just reinstating CPP," Freeman said. "Candidates are coming out with bold and ambitious, economywide plans, and they don’t feel tethered to the CPP."

Freeman argued it would nonetheless behoove candidates to think about what emissions reductions they could accomplish using solely the executive branch’s authority, as both the Clean Power Plan and ACE do.

"They always do this, they campaign on big, bold plans that require Congress to act," Freeman said of presidential candidates. "Then at some point, they realize that they need to examine their existing authorities like the Clean Air Act to see what can be accomplished there."

Not a ‘kitchen table issue’

Most climate policy plans that have been released would require some new legislation, whether to impose new taxes, spend money on new programs or create new regulations.

But because climate isn’t a "kitchen table issue," candidates might not feel compelled to talk specifically about what they could do without Congress’ help, Freeman said.

Former Rep. Beto O’Rourke of Texas was one of the few Democratic candidates to respond to ACE with a promise to take action.

"We should be doing everything possible to strengthen the clean air rules for power plants so we can cut pollution, improve the quality of our air and water, and fight climate change before it’s too late," he tweeted in response to ACE being finalized. "My administration will."

O’Rourke has an existing climate plan that would put $5 trillion toward the move away from fossil fuels and would put the nation at net-zero greenhouse gas emissions by 2050.

Washington Gov. Jay Inslee, who has made climate change more of a priority than any of his rivals, gave the most detailed responses to the regulation. He used both his official, taxpayer-funded resources and his campaign operation to blast the rule.

"Donald Trump’s undying loyalty to coal CEOs is literally killing Americans," Inslee said in a campaign statement. "This Dirty Air Rule may be the most destructive environmental policy action ever taken by an American president."

He used the opportunity to plug his plan to transition the country to 100% clean energy, including eliminating coal in 10 years and all fossil fuels in 15.

Sen. Bernie Sanders (I-Vt.) called the plan "outrageous" in a tweet the day after it was released, from his Senate office.

"President Trump’s proposal to repeal the Clean Power Plan is a stark reminder that instead of worrying about the future of our planet, he is more concerned with protecting the interests of his friends in the fossil fuel industry."

"The climate crisis is endangering our country, our health, our economy, and our national security, while the Trump administration continues to put the profits of corporate polluters over the well-being of Americans," she said in the statement.

"What we need instead are policies that spur investments in a clean energy economy and ambitiously tackle our climate crisis, economic inequality, and racial injustice."

"The facts are clear, but this President continues to ignore science and is undermining efforts to reduce carbon emissions. This is staggeringly irresponsible," Minnesota Sen. Amy Klobuchar tweeted from her campaign account.

Sen. Michael Bennet of Colorado, through his Senate office, tweeted that with ACE, the administration is "essentially giving a huge handout to big polluters at the expense of public health and our planet." He later said, "We must #ProtectCPP."

California Sen. Kamala Harris, on the other hand, said ACE "give[s] states the option to do *absolutely nothing* about reducing their carbon pollution," which she called "a failure of leadership from the Trump administration."

Sen. Kirsten Gillibrand of New York used both her Senate office and her campaign Twitter accounts to slam the plan.

The Trump administration is replacing the Clean Power Plan "with a handout to polluters that does nothing to reduce carbon emissions — a terrifying setback that could put lives at risk," she tweeted, while her campaign arm tweeted out: Trump’s legacy would be "protecting an industry that has caused severe environmental health problems, instead of protecting our planet."