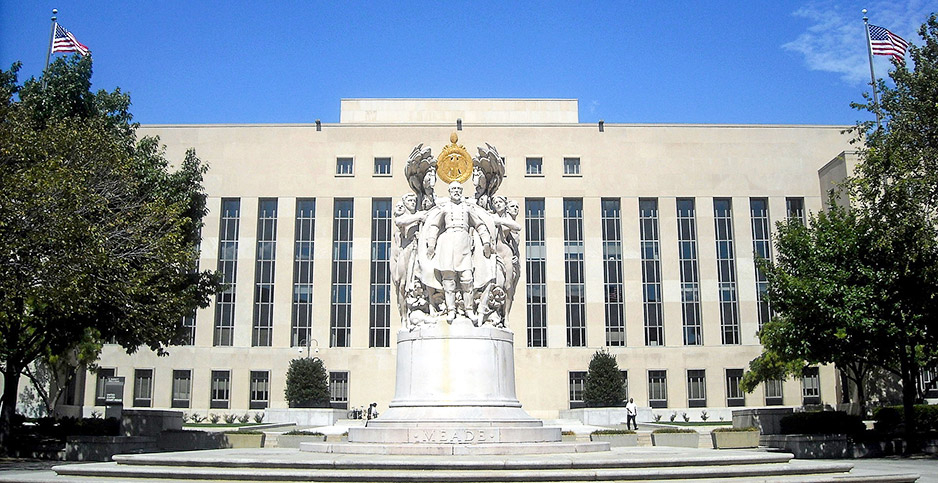 Challenges to the Trump administration's proposal to replace the Clean Power Plan with a narrower rule are expected to eventually land at the U.S. Court of Appeals for the District of Columbia Circuit. AgnosticPreachersKid/Wikipedia

Opponents argue that the ACE rule will do little, if anything, to fight climate change because it will allow otherwise declining coal plants to survive longer and power the grid more often. Critics say acting EPA Administrator Andrew Wheeler’s proposal is riddled with loopholes and faulty judgment that render it both useless and unlawful.

"Today’s Trump-Wheeler proposal is an abdication of EPA’s legal and moral responsibility to protect our country, our states and our communities from the worst impacts of the climate crisis," Sierra Club attorney Joanne Spalding told reporters yesterday. "If EPA moves forward with this rollback, we are confident that it will be struck down in court."

But Wheeler says the ACE rule will help power-sector emissions continue to decline, and he maintains that the narrower approach is necessary because it stays within EPA’s authority under the Clean Air Act. Clean Power Plan opponents have long argued that the act requires air rules to zero in on power plants, rather than making changes to the broader power grid.

"It respects the rule of law and will enable states to build affordable, clean and reliable energy portfolios," Wheeler said after unveiling the proposal yesterday. "ACE operates within the four corners of the Clean Air Act. The era of top-down, one-size-fits-all federal mandates is over."

Here’s what to know about the courtroom fights to come.

Trump officials give two key legal reasons for scrapping the Clean Power Plan in favor of the ACE rule: to give state governments a greater role in planning emissions cuts and to refocus oversight on power plants.

EPA air chief Bill Wehrum told reporters yesterday that the proposed regulation would "redefine" the relationship between states and the federal government.

"The Clean Power Plan was very federal-heavy," he said. "It was essentially a federal mandate that left the states very little latitude as to what they would do under the program and how they would do it. We believe that’s not the correct way to implement this part of the law, and that’s not what Congress intended."

The ACE rule gives states the primary authority to decide how best to cut emissions at power plants — guided by a list of "candidate technologies" recommended by EPA. States must submit their plans for EPA approval within three years. The regulation does not set a minimum standard for emission reductions.

The narrower focus on power plants is also a key feature of the proposal, Wehrum said. That stems from a Clean Air Act standard requiring EPA to use the "best system of emission reduction" in its regulations for existing sources. Obama’s EPA thought the best system was a sectorwide approach; President Trump’s EPA thinks the law requires that regulation be limited to specific technology at power plants.

"We believe that the law requires that this program be implemented to focus on emissions controls and other measures that can be applied at the source to particular power plants," he said. "And this is a substantial difference from the Clean Power Plan, which reached beyond power plants and sought to regulate the electric power sector as a whole."

Who’s opposed to the new plan?

Among them: Democratic lawmakers and a throng of environmental groups flooding inboxes with fact checks, legal analyses and economic breakdowns of the ACE rule. Natural Resources Defense Council President Rhea Suh, for example, vowed that her group will "fight this dangerous retreat with every tool available."

"If the Trump administration’s proposal to dismantle the Clean Power Plan is adopted, we will work with our state and local partners to file suit to block it — in order to protect New Yorkers, and all Americans, from the increasingly devastating impacts of climate change," New York Attorney General Barbara Underwood (D) said in a statement.

What are opponents’ key legal objections?

State and environmental attorneys argue that the ACE rule falls far short of EPA’s obligations under the Clean Air Act.

Because the agency determined in 2009 that greenhouse gases endanger public health, EPA must take action to regulate sources. But critics say the new proposal doesn’t do that effectively and does not meet the Clean Air Act standard of a "best system of emission reduction."

Revesz said EPA may face a steep battle in the courtroom explaining why it opted for an approach that leads to such lower levels of environmental protection.

NRDC attorney David Doniger noted that EPA has faced multiple recent courtroom losses on other efforts to roll back regulations, and he expects the ACE rule to follow the same course.

"We are confident the courts will rebuke the Trump administration as they have with increasing frequency and find this proposal an illegal evasion of EPA’s responsibilities under the Clean Air Act," he said.

How will the litigation play out?

A courtroom battle over the ACE rule, if finalized, is inevitable.

But it will take a while before it’s time for litigation. EPA has set a 60-day comment period for the proposed ACE rule, but experts think the rulemaking process could take as long as a year. Legal action likely won’t begin until the rule is finalized. Doniger noted that court proceedings will then play out to the end of Trump’s term.

The lawsuits will land in the U.S. Court of Appeals for the District of Columbia Circuit. That’s the same court that considered but never resolved litigation over the Clean Power Plan. The massive case was placed in abeyance last year after Trump’s EPA told the court it was working on a rollback.

Clean Power Plan supporters have repeatedly urged the D.C. Circuit to lift the abeyance and decide the many legal questions in play about EPA’s Clean Air Act authority. Separately, they’ve encouraged the Supreme Court to revisit its 2016 decision freezing implementation of the Obama rule (Climatewire, July 31).

Sean Donahue, an attorney who represents a coalition of environmental groups in that case, said he’s doubtful the Supreme Court will revisit the Clean Power Plan stay. He said environmentalists will continue pushing the D.C. Circuit to lift the abeyance of the litigation.

"We continue to believe that the case that was argued nearly two years ago should be decided, in part because a lot of the issues about what EPA can do under the statute are the same," he said.

How is EPA responding to the pushback?

EPA officials say they’re feeling pretty confident about their odds in the courtroom.

"An important part of what we’re doing here is getting us back in our lane," said Wehrum, the air chief. "We believe the CPP went beyond EPA’s legal authority in some very fundamental and important ways."

He argued that the dispatch of power plants and the design of power grids should stay in the control of state governments. Wehrum and Wheeler both pointed to the Supreme Court stay as support for their argument that judges would agree.