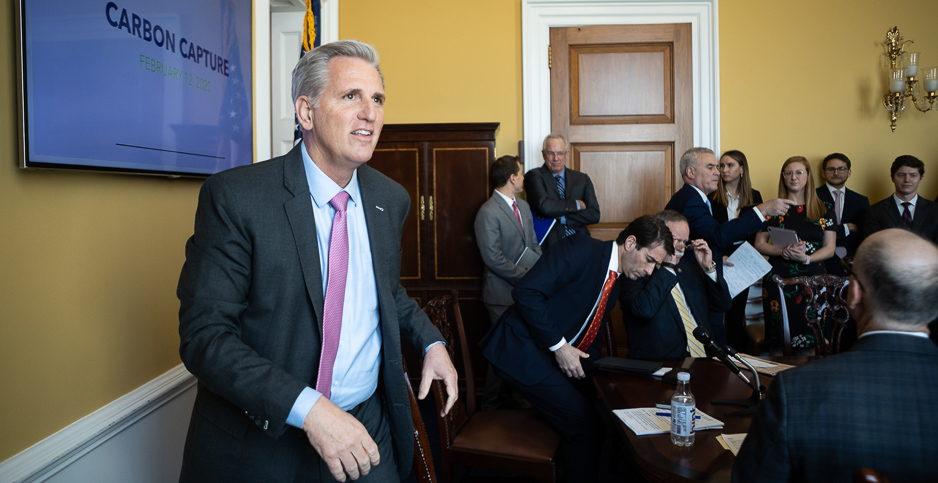 It’s part of a battle for the soul of the party between hard-right organizations, such as the Club for Growth, and the newfangled and well-funded ecosystem of conservative clean energy groups, led most prominently by ClearPath and Citizens for Responsible Energy Solutions.

There are abundant signs on Capitol Hill that people who question climate science are losing clout with Republicans. But they are insistent that not much has changed, particularly with President Trump still in the White House.

"I do think that there’s been more hand waving," he added, "but I don’t think Republican voters have been influenced very much by the hand waving and the shouting."

Party leadership on Capitol Hill would beg to differ. And even some Trump-loyal Republicans are happy to distance themselves from the climate science denial movement, even if they’re not willing to offer the kind of policies many experts say will be necessary to reduce the use of fossil fuels — the primary driver of climate change.

None would reduce fossil fuel use, but they would aim to reduce emissions through carbon capture and sequestration (Greenwire, Feb. 12).

Meanwhile, Republicans on powerful committees such as Energy and Commerce have largely dropped outright climate denial for the kind of "energy innovation" talking points favored by CRES and ClearPath.

"Both sides now recognize climate is changing, temperature is increasing [and] we need to do something about it," said Energy and Commerce Committee ranking member Greg Walden (R-Ore.). "We’re just speaking out and making our own views known better, and there is more evidence."

“Policywise, what they’re doing is phenomenal and unbelievable and beyond anything we could have hoped. It truly is.”

Marc Morano, director of communications at the Committee for a Constructive Tomorrow

The fact remains, however, that the Republican president frequently denies climate change and for a time employed a man — William Happer — tasked with performing a critical review of federal climate science.

For skeptics and libertarian ideologues alike who want to see the federal regulatory regime torn down, that’s an important audience.

"Policywise, what they’re doing is phenomenal and unbelievable and beyond anything we could have hoped," he said. "It truly is."

Fighting over the details

There’s no meaningful debate among climate scientists about whether temperatures are rising because of man’s industrial activity.

A host of peer-reviewed studies warn of potentially catastrophic economic and environmental effects, many of which are readily apparent today, without dramatic changes to global greenhouse gas emissions. Most objections to the science have virtually zero credibility in the world’s scientific community.

"If local environmental groups or local media in their districts start looking into these bills and start giving them publicity in the local media, they’re going to have a hard time explaining themselves because we’ve conceded that global warming’s a problem, and we’ve got a plan which will do nothing to address it," Ebell said.

"So I think it’s not a well-thought-out way to proceed on this issue, and I doubt that they’re going to get very much positive spin out of it with voters," he said.

After McCarthy, Louisiana Rep. Garret Graves and other Republicans came out with their package of bills last month, the Club for Growth promptly blasted it, threatening to withhold endorsements from supporters.

"When you give an inch on principle, you concede a negotiating posture that has also led to devastating bipartisan agreements on bailouts, spending and regulation," Scott Parkinson, vice president of government affairs for the Club for Growth, wrote in a subsequent letter to the editor in The Washington Post last month.

"Club for Growth will continue to work with principled conservatives who reject climate alarmism and fight for energy and environmental policies based on sound economic principles," he wrote.

Despite those disagreements, the Republican efforts on climate aren’t actually all that new, and they’re generally more focused on repackaging GOP-backed policies through a climate change lens.

One of the bills they rolled out last month, for instance, would make permanent the 45Q tax break for carbon capture and sequestration, which a Republican-led Congress expanded in 2018.

Graves, the House Select Committee on the Climate Crisis’ ranking member, is also leading a letter to National Economic Council Director Larry Kudlow, to be sent in the coming weeks, urging the White House to promote fossil fuel exports as a way to reduce global greenhouse gas emissions.

Top Republicans, including Minority Whip Steve Scalise of Louisiana and conference Chairwoman Liz Cheney of Wyoming, are expected to sign.

The Trump administration, of course, is already gung-ho about exporting fossil fuels, but Republicans argue that it can help the fight against climate change because U.S. exports have lower life-cycle emissions than sources in the developing world.

The current backdrop, however, is that U.S. emissions are increasing, undermining Republicans who point to emissions reductions during the last 15 years. EPA’s most recent numbers found that greenhouse gas emissions rose 3.1% in 2018 — during Trump’s second year in office — despite the continued decline of coal (Climatewire, Feb. 13).

Meanwhile, the party as a whole still roundly rejects carbon pricing and regulations, tools that most climate experts say will be necessary to deploy clean energy technology to the market and reduce emissions fast enough to stave off the worst effects of climate change.

"Looking back over the last several years there have been policies that are entirely consistent with Republican ideology that we can continue doing that achieve multiple goals," Graves said. "My whole thing is let’s not sit here and fight over the details of the science."

Ebell and other skeptics dismiss conservative clean energy groups as empty vessels with money but no loyal supporters, but they’re having an impact.

CRES alone spent nearly $500,000 lobbying on various energy issues in the fourth quarter of 2019, according to disclosure forms, including with several outside lobbying firms.

Much of the lobbying effort went toward getting clean energy priorities into the tax extenders package at the end of last year, according to CRES Executive Director Heather Reams, but CRES and ClearPath were enthusiastic about Republicans adopting their rhetoric in early 2020.

Still, Reams said she doesn’t see her group’s efforts as in direct conflict with those who question climate science. Rather, she believes she offers Republicans who want to talk about climate change a supportive landing pad.

"They’re responding to voters," Reams said. "So I think it’s a very unfair position that some groups are putting Republican members in. These are complex problems and deserve complex solutions, and keeping your head in the sand is not a solution."

And in a sign that the climate skeptic wing’s influence could be petering out, the Heartland Institute — a conservative think tank that has long dispersed debunked theories about climate change — laid off some of its staff last week amid reported financial woes (Greenwire, March 9).

Efforts to promote carbon taxes as a conservative solution to climate change have been less successful so far, however, showing the limits of the Republican transformation. Currently, the policy has only a small constituency.

“These are complex problems and deserve complex solutions, and keeping your head in the sand is not a solution.”

Former South Carolina GOP Rep. Bob Inglis founded the carbon tax group republicEn, after he lost in a landslide Republican primary in 2010. This happened after he introduced a carbon tax in 2009, a point skeptics are eager to bring up.

And the six Republicans who voted against an anti-carbon tax resolution put forward by Scalise on the House floor in 2018 have had mixed fortunes. Just three are still in Congress, and one — Florida Rep. Francis Rooney — is planning to retire.

"The disparity between Trump’s scorched earth approach and the rhetoric you’re hearing from Republicans is pronounced," said Paul Bledsoe, a former Clinton White House climate aide who is now a strategic adviser at the Progressive Policy Institute.

"I noticed they won’t criticize any of the president’s rollbacks, so I don’t know how politically effective this is ultimately going to be when Trump is overturning every possible climate protection he can," he said.

Most of the party is still "lined up in the right orientation," said Tom Pyle, president of the American Energy Alliance, who led Trump’s Department of Energy transition team.

Pyle predicted that the GOP will eventually revert to the mean once the fervor around the Green New Deal dies down. "It’s not like the Republicans haven’t made this mistake in the past," Pyle said.

But Reams said it’s polling — raw data — that’s driving rhetorical changes now, and constituents seem to be top of the mind for some Republicans willing to talk about climate change.

Rep. Tom Cole (R-Okla.), a senior appropriator, said he thinks skeptic groups are losing influence. But the energy sector is changing rapidly as renewables get cheaper and natural gas helps replace coal, which makes for an easier proposition for Republicans.

"You take Oklahoma, a classic oil and gas state," he said. "We get more than 40% of our electricity from wind power, so we know these things can be consistent with one another. We think natural gas has been a huge contributor to lowering greenhouse emissions, so we’re not ready to give that up."