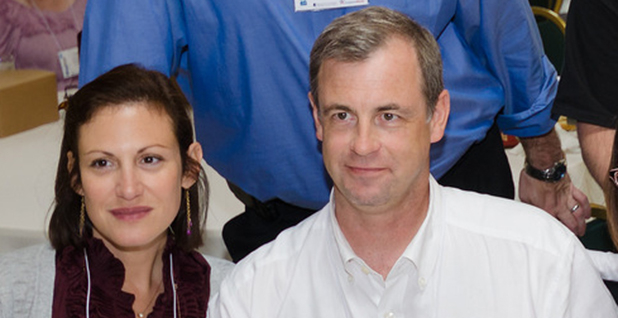 A number of climate skeptics are rejecting the threat of mail bombs sent to Democrats and the media, in what some observers describe as a nexus of conspiratorial thinking in the politically charged days before the midterm elections.

Some prominent conservatives, including many who reject climate science, have questioned whether the devices allegedly sent through the mail by Cesar Sayoc are "fake bombs." Others described the attempted delivery of 12 or more bombs as a "hoax," echoing claims by the president and other conservatives meant to discredit human-caused global warming.

"The Secret Service must treat these possible hoaxes as real in the unlikely event they are not another liberal scam," wrote Kurt Schlichter, a conservative columnist with the website Townhall. He has also accused climate scientists of lying about rising temperatures.

"Climate change is a fraud and I’m going to increase my carbon footprint because the hell with you," he wrote in March, directing his comments at Katharine Hayhoe, an atmospheric scientist at Texas Tech University.

Lou Dobbs, a Fox Business anchor, has spent years attacking climate science, at one point saying that he would be "debunking climate change" by inviting conservative researchers whose findings challenge mainstream findings onto his show. Last week, he suggested that the bombs were a political distraction by Democrats.

"Fake News — Fake Bombs. Who could possibly benefit by so much fakery?" he tweeted.

President Trump himself referred to the mail bombs as "Bombs" in a tweet he wrote before Sayoc’s arrest. Days earlier, he attacked climate scientists, including those who work for the federal government, who he said have "a very big political agenda."

Trump’s tweet questioning the bombs was written exactly six years after a tweet, in advance of the 2012 presidential election, raised the possibility of President Obama using a bomb to sway the race.

"Be careful of an Obama ‘bomb’ to win election! Would be a horrible thing to do," Trump wrote.

Trump has shifted the conservative base toward positions once considered unthinkable, such as an embrace of Russia and economic protectionism, said Jerry Taylor, president of the Niskanen Center and a former climate skeptic who now works to craft climate policy.

Jumping from a rejection of the scientific consensus on climate change to a denial of bomb threats isn’t that big a leap, Taylor said.

"If you’re a right-wing Trumpist conservative, you don’t want to believe that your people or your crowd is in the business of trying to kill people in the Democratic Party, and so you will harness your brainpower to come up with any narrative story or explanation that you can imagine to argue the contrary," he said.

"Climate denialism was in a step proof of concept for Trumpism in general to the extent to which this braying about fake news and conspiracies with regards to elites and academics and scientists and reporters and all of that proved so successful in the climate arena," he added. "It certainly laid the groundwork for metastasizing climate denialism and the tactics and strategies involved in that to other aspects of political life."

Reporters quickly unearthed a trove of photos of Sayoc attending Trump rallies. His alleged bombing campaign included the use of a white van plastered with political messages supporting Trump and criticizing CNN. Even before Sayoc’s arrest, Trump allies sought to create doubt about the bomber’s intentions and mocked those who connected it to the president’s rhetoric.

The lack of objectivity reached such a point that Trump’s FBI director, Christopher Wray, emphasized at a press conference after Sayoc’s arrest that the bombs "are not hoax devices."

By then, however, the message had already caught on with some of the president’s supporters. At a Florida gubernatorial debate last week, a protester held a sign that read "Democrats: Fake News, Fake Bombs."

Steve Milloy, a former member of the Trump administration’s EPA transition team who rejects climate science on his JunkScience blog, suggested that Booker, the Democratic senator who was targeted by a mail bomb, may have sent it to himself.

"Having a fake bomb addressed to you is the new Democrat status symbol," Milloy wrote in one tweet. In another, he wrote, "I won’t be surprised to find some progressive psycho on the other end of these. Possibly not meant to explode — only to create #FakeNews chatter about presumed GOP responsibility."

Frank Gaffney, who runs the Center for Security Policy, which has gained notoriety for promoting Islamophobia, has claimed that scientists have doubts about human-caused climate change. Scientists say it’s "unequivocal."

Last week, Gaffney suggested that the bombs might have been a ruse to distract from negative press about liberal protesters confronting conservative politicians in restaurants.

"None of the leftists ostensibly targeted for pipe-bombs were actually at serious risk, since security details would be screening their mail," Gaffney wrote on Twitter. "So let’s determine not only who is responsible for these bombs, but whether they were trying to deflect attention from the Left’s mobs."

Bill Mitchell, a conservative radio show host, blamed the mail bombs on Soros, the Jewish philanthropist who was targeted with the first bomb.

"These ‘explosive packages’ being sent to the #Media and high profile Democrats has Soros astro-turfing written all over it so the media can paint the #GOP as ‘the dangerous mob,’" Mitchell wrote. "Pure BS."

Mitchell’s tweet came weeks after he suggested that sea levels were falling.

"I’ve often wondered how melting sea ice will raise ocean levels since when water freezes, it assumes a hexagonal shape, thereby taking up MORE volume than water," he wrote. "Therefore, thawing ice should actually lower sea levels as less space is displaced by the thawed water."

Rising sea levels are driven by melting glaciers on land, not by melting sea ice.