Climate spending ‘a waste of your money’ — OMB chief 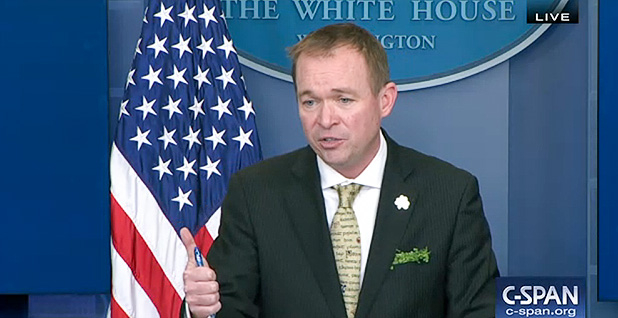 President Trump sees spending on climate change programs as money down the drain.

So said his budget chief, Mick Mulvaney, as he offered that today as the simple reason for proposing big cuts in federal climate spending for fiscal 2018.

"As to climate change, I think the president was fairly straightforward: We’re not spending money on that anymore," the Office of Management and Budget director said in a White House news briefing. "We consider that to be a waste of your money to go out and do that, so that is a specific tie to his campaign."

Congress is expected to push back against the White House proposal, and Mulvaney said the administration is ready for that fight.

"I’ve been on the Hill enough to know that some of these will be very unpopular," said the former South Carolina congressman.

"I’ve been a member of Congress. … I had my constituency, it was a district. Senators represent an entire state," he said. "We’re always dealing with special interests from back home, we’re dealing with lobbyists back home."

But, Mulvaney said, Trump "is beholden to none of that. The president has drafted a budget for the entire nation because that’s who he sees himself as representing."

The administration’s message to Capitol Hill, he said: "We want more money for the things the president talked about, defense being the top one, national security, and we don’t want to add to the budget deficit. If Congress has another way to do that, we’re happy to talk to them about it."