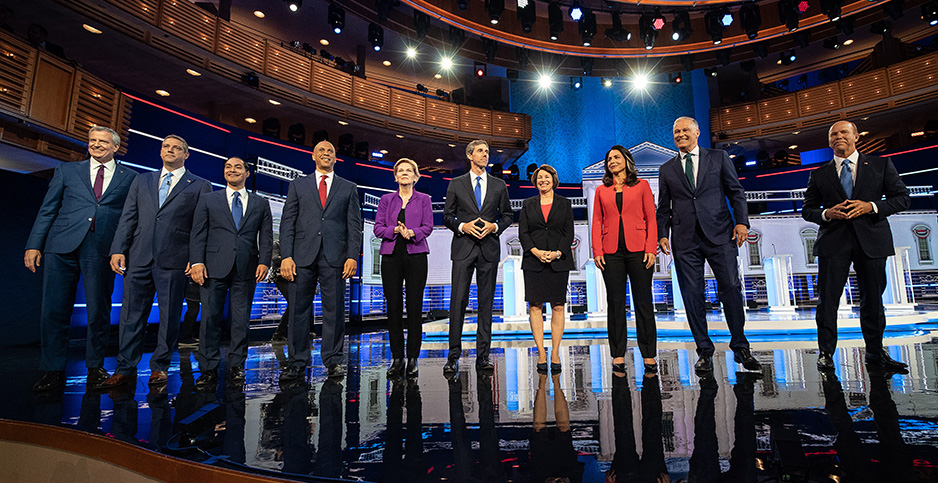 Climate change got high billing in the first debate of the Democratic presidential primary, but the candidates did little to differentiate their positions.

The threat of climate change and proposed policy solutions was one of the main topics that moderators from NBC News, MSNBC and Telemundo asked the first set of 10 Democrats at the Miami event yesterday, alongside topics like foreign policy, gun violence and the economy.

Numerous candidates also wove climate into answers to other questions. Massachusetts Sen. Elizabeth Warren, one of the leading contenders for the nomination to run against President Trump, mentioned her plan for green manufacturing in an answer about the economy.

Former Texas Rep. Beto O’Rourke cited climate as his answer to a lightning-round question on the biggest geopolitical threat to the United States.

"Our existential threat is climate change. We have to confront it before it’s too late," he said.

But despite months of pressure from candidates and environmental groups, the main climate change part of the debate took up around seven minutes of the two-hour session. That gave little room for candidates to set themselves apart.

Moderator Rachel Maddow, a liberal talk show host on MSNBC, gave Washington Gov. Jay Inslee the chance to kick off the climate portion of the debate. Inslee has billed himself as the climate candidate of the race.

"We are the first generation to feel the sting of climate change, and we are the last that can do something about it," Inslee said, repeating talking points that have dominated his campaign.

"Our towns are burning, our fields are flooding, Miami is inundated. And we have to understand this is a climate crisis, an emergency. And it is our last chance in the administration, next one, to do something about it."

Inslee mentioned his plan to bring the United States to 100% clean electricity but also said that his mere prioritization of the issue is what ought to set him apart.

"The most important thing on this, and the biggest decision for the American public is: Who’s going to make this the first priority? And I am the candidate, and the only one, who’s saying this has to be the top priority of the United States," he said.

Former Housing and Urban Development Secretary Julián Castro boasted of his work at HUD and as mayor of San Antonio.

"I’m one of the few candidates in this race with executive experience, with a track record of getting things done," Castro said, touching on work with federal resilience programs and phasing San Antonio away from coal.

Former Maryland Rep. John Delaney wasn’t asked about climate but butted in to promote his carbon tax proposal, which he has pitched as the most politically viable climate plan that is also aggressive.

"All the economists agree that a carbon pricing mechanism works. You just have to do it right," he said. "I can get that passed my first year as president, with a coalition of every Democrat in the Congress and Republicans who live in coastal states."

The League of Conservation Voters, one of the most vocal groups pushing for climate to take a starring role in the Democratic debates, welcomed the attention to it but called for more.

"While it’s encouraging that many of the candidates prioritized both the climate crisis and clean energy solutions tonight, it simply wasn’t enough," Tiernan Sittenfeld, LCV’s senior vice president for government affairs, said in a statement.

"At a time when voters overwhelmingly want climate action and when we have so little time to act, the moderators barely scratched the surface of this existential threat in a city that could literally be underwater in our lifetimes," Sittenfeld said.

Another 10 candidates will debate with the same moderators today. That crowd will include two of the race’s front-runners: former Vice President Joe Biden and Vermont Sen. Bernie Sanders.