Climate text pushes nations to act faster. Will it survive? 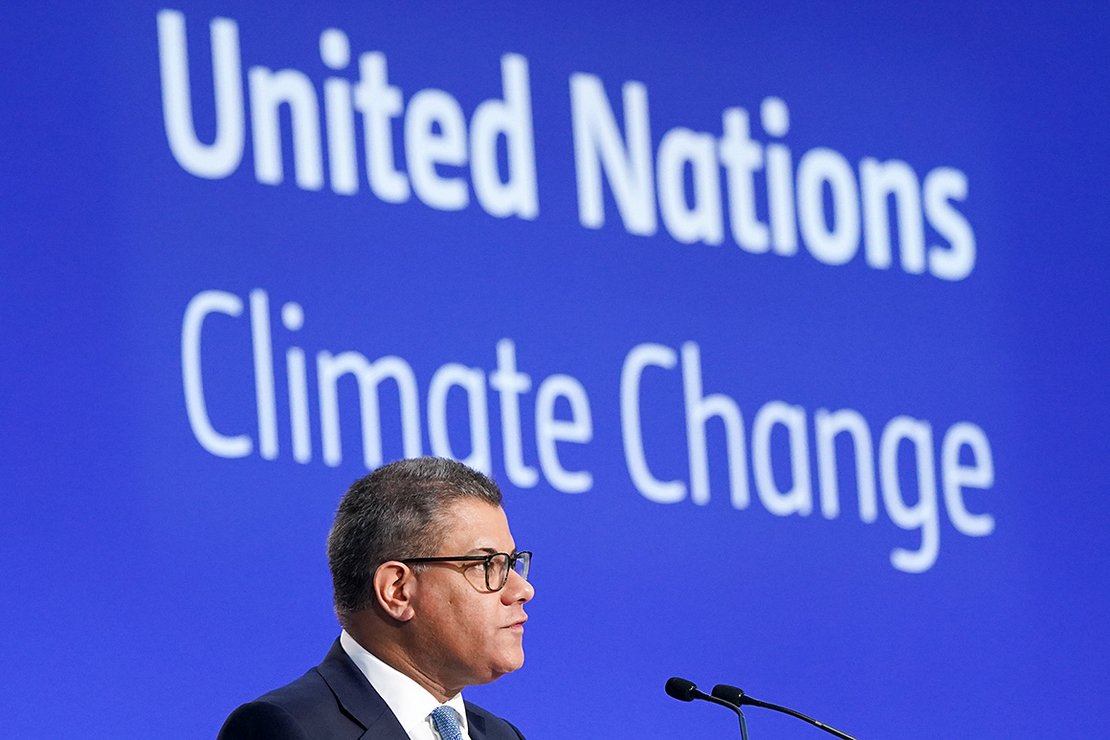 The president for COP 26, Alok Sharma, speaks to delegates during the fifth day of the climate conference in Glasgow, Scotland. Ian Forsyth/Getty Images

GLASGOW, Scotland — Negotiators here at the global climate talks tentatively agreed to accelerate the timeline by which countries need to strengthen their promises for carbon reductions, according to a draft of the working text released this morning.

The text reflects growing alarm among nations that global goals to slow the pace of climate change are falling short. It urges the countries to “revisit and strengthen” their 2030 climate targets by next year, a move that would dramatically speed up the five-year timeline for new pledges.

“This is crucial language,” said David Waskow, director of the international climate initiative at the World Resources Institute.

The text catapults the United Nations climate talks, known as COP 26, into their final phase. A decision to accelerate the pace by which countries submit new promises to cut their greenhouse gas emissions stands to be a major outcome of the talks.

The next three days of negotiations will determine if that language survives.

The text pushes the envelope, and observers suspect pushback. That raises questions about where the U.S. and E.U. stand — and neither have stated their position publicly.

“They’ll need to swing in hard on this language to keep it there,” Waskow said.

Under the Paris Agreement, nations have to offer updated emissions reduction goals every five years. But that timeline threatens to be outpaced by the rate of global warming, warn leaders of nations that are vulnerable to rising seas, drought and blistering heat waves.

Tina Stege, the climate envoy for the Marshall Islands and member of the High-Ambition Coalition, said yesterday that countries should submit new goals next year. A statement issued last week from the coalition, which includes the United States, reflects that time frame.

“The decade of action is now, and for these things to have impact and to make sense and actually do what we need them to do, you have to start next year,” she said.

The new timeline outlined in the text released this morning marked a shift from earlier drafts. It was absent from the language being negotiated over the weekend, and observers raised concerns that neither the U.S. nor the European Union had pointed to gaps around a common time frame during recent consultations.

“That silence indicates that those parties — the U.S. and E.U. — are not really pushing on this ambition front in a way that’s needed at the moment,” Waskow said yesterday.

The draft text shows a shift in urgency.

“I think what’s happened principally is that many of the vulnerable countries pushed very hard for language like this with a clear time frame,” Waskow said this morning.

Negotiators with some developing countries have also pushed hard for language that would be much clearer around preventing warming from surpassing 1.5 degrees Celsius. Those changes are not included in the text.

There’s also a push to add clearer language that differentiates large emitters who need to take more action — some of whom have resisted doing so — from smaller, climate-vulnerable countries that release small amounts of greenhouse gases.

The draft text covers the full range of issues at the heart of the talks — everything from science to adaptation and mitigation to finance. Knotty issues related to carbon trading will need to be resolved, or delayed, when talks conclude Friday.

Observers expect pushback from countries that have resisted increasing their climate mitigation efforts. Russia and Saudi Arabia have been particularly outspoken, and that raises the risk that the final text could be watered down.

This year’s climate talks follow a Group of 20 meeting that was unable to get countries to commit to ending fossil fuel subsidies by a set date or phasing out coal within their borders.

Today’s draft text reflects much of that language.

Areas where the G-20 did make progress have been reflected in announcements made already in Glasgow, such as last week’s commitment by more than 20 countries to end public financing for international fossil fuel development.

The world is heading toward at least 2.4 C of warming based on pledges alone, according to a new report released yesterday by Climate Action Tracker. When current policies are accounted for, that target goes up to 2.7 C.

Stege of the Marshall Islands said that gap shows why nations must strengthen their carbon commitments more quickly. Those pledges are called national determined contributions, or NDCs, in U.N. parlance.

“We have to come back to make sure that NDCs are aligned with 1.5, and if they’re not aligned now, we have to have something in place that gets us back to the table until those are delivered,” she said.

Countries are also being pushed to step up on financing climate projects, particularly for adaptation and loss and damage, which refers to climate impacts that are irreversible and can’t be avoided by adaptation.

“That’s what the vulnerable countries really need as part of this package, for them to be able to stand up to China, the Saudis and other hardliners in the developing country group who say, ‘We shouldn’t make any commitments to raise our ambition because the developed countries aren’t keeping their promises on finance,’” said Alden Meyer, a senior associate at the climate think tank E3G.

This year’s climate talks could produce two outcomes, as he sees it. One would result in gridlock on key issues and a lack of any higher ambition. The other leads to faster action.

“No matter what we get, it’s not going to be a mission-accomplished moment,” Meyer said, referring to the outcome of the talks.