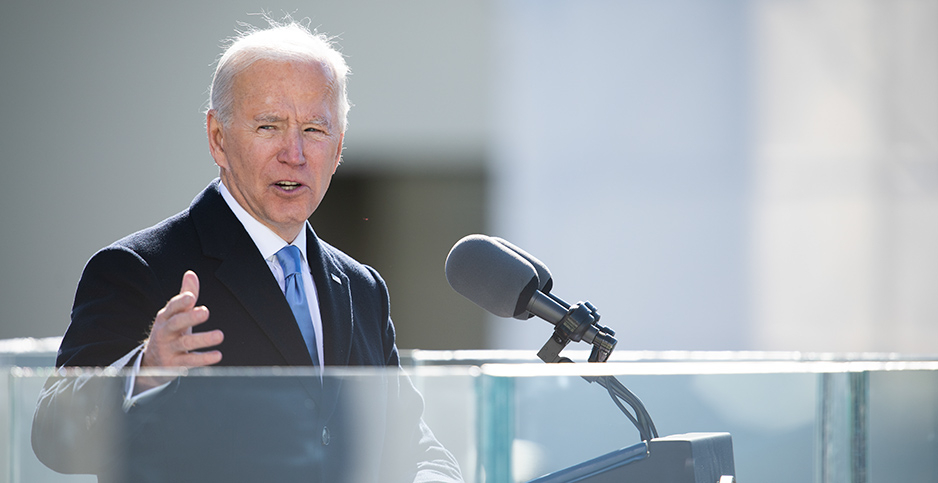 President Biden today is expected to revive an Obama-era order that calls on federal agencies to prepare for the national security consequences of climate change. Navy Petty Officer 1st Class Carlos M. Vazquez II/Chairman of the Joint Chiefs of Staff/Flickr

This story was updated at 9 a.m. EST.

The move is part of a broader package of climate initiatives Biden will sign today, the White House announced this morning. Much of Biden’s directive will focus on national security — an arena experts say will become more strained as the planet heats up.

The task of writing the National Intelligence Estimate will fall to Avril Haines, Biden’s newly installed director of national intelligence. These documents typically include input from the multitude of U.S. intelligence agencies, including the CIA. It’s a level of analysis reserved for the most significant threats facing the United States.

Biden’s order also is expected to revive an Obama-era directive that’s designed to improve the way the federal government prepares for the national security consequences of climate change.

It will direct the State Department to prepare to submit the Kigali Amendment to the Montreal Protocol to the Senate for ratification. That amendment, negotiated by the Obama administration in 2016, mandates a global phasedown of hydrofluorocarbons — a class of superpollutant used in air conditioning and refrigeration.

It will address plans for the construction of a new 2030 commitment to the Paris Agreement and will task Defense Secretary Lloyd Austin to direct the Pentagon to conduct an assessment that examines the global warming threats facing military facilities and installations.

The Obama-era presidential memorandum that Biden intends to reactivate would direct 19 federal agencies to form a working group to catalog the tools the federal government could use to help agencies plan and prepare for climate threats.

The memorandum, which was scrapped early in the Trump presidency, gave agencies a 150-day deadline to construct action plans that would ensure climate change was built into their national security doctrine and policy.

"Climate change poses a significant and growing threat to national security, both at home and abroad," states the 2016 memorandum. It notes that warming jeopardizes military and other U.S. missions abroad and contributes to food shortages, severe weather, human health concerns and other drivers of global instability.

The Obama White House debuted the original memorandum on Sept. 21, 2016 — the day after President Obama gave his final speech to the U.N. General Assembly in New York. In his remarks before a high-level summit on migration, Obama warned that climate change adds to the suffering and conflict that drive people from their homes in search of refuge abroad.

"If we don’t act boldly, the bill that could come due will be mass migrations, and cities submerged and nations displaced, and food supplies decimated, and conflicts born of despair," Obama said at the time.

Erin Sikorsky, a former career official who served as deputy head of the Strategic Futures Group on the National Intelligence Council during the Trump administration, said the U.S. intelligence community and other agencies have lagged in incorporating climate change into analysis and planning.

That’s a liability from both a policy and a national defense standpoint, she said, because U.S. troops may be called upon to respond to conflicts the Pentagon hasn’t adequately planned for.

Sikorsky applauded Biden’s steps in the executive order, saying they deliver on promises he made on the campaign trail. But she added that there will be opportunities to build on them to ensure climate change was fully integrated into national security planning and policy.

"The important thing is that climate isn’t separate. That it is brought into all the conversations we have on national security, because it affects all those dynamics," said Sikorsky, who is now deputy director of the Center for Climate and Security. "And no matter what issue you’re talking about, there’s a climate dimension about it and you’ve got to understand it."

Sherri Goodman, a senior fellow at the Wilson Center’s Environmental Change and Security Program, said the COVID-19 pandemic demonstrates that threats that don’t fall into the usual category of human conflict often can be just as consequential or damaging.

"It has been easy to ignore those threats because it is hard to create an enemy out of a disease or a changing environment," she said. "It’s easier to rally people around a country or a group or a set of people as an enemy."

"The Earth is not our enemy," she added, but it still merits attention.