Climate will come up tonight. Just not in Trump’s speech 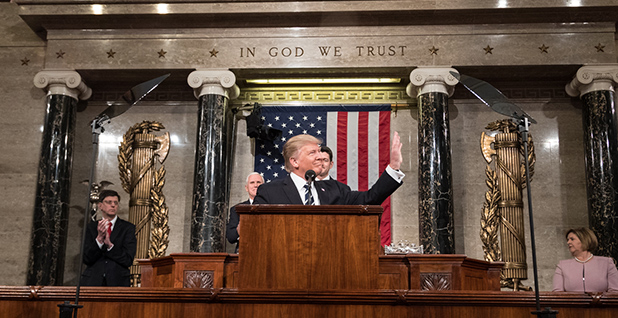 There is little chance that President Trump will address climate change in his State of the Union speech. But climate change will likely become a part of tonight’s events, no matter what the president says — or doesn’t.

In both of his previous addresses to Congress, Trump all but ignored the threat of a hotter planet — never once uttering the phrases "climate change" or "global warming." The issue is as politicized as ever, and Trump has spent his first two years as president rolling back or weakening many of former President Obama’s climate policies.

But in his speech this year, Trump faces a new Congress, one where emboldened Democrats control the House. And he’ll be talking to an American public that is more worried than ever about global warming. In the last year, concern over climate change has increased among Democrats, independents and Republicans, driven by images of natural disasters, recent polls have shown.

About 12 hours after Trump ends his address, NOAA and NASA will announce that last year was the fourth-warmest year since modern record-keeping began, coming behind only the previous three years.

So climate change will likely become a part of tonight’s events, whatever Trump says.

Democrats plan on using the address, which was delayed due to the government shutdown fight over a border wall, to highlight the need for Washington to address climate change. Democratic lawmakers are bringing a series of guests to emphasize the need for climate action, including Varshini Prakash, a co-founder of the Sunrise Movement, which is pushing Congress to accept the "Green New Deal"; 350.org founder Bill McKibben; and League of Conservation Voters President Gene Karpinski.

And activists with the Sunrise Movement are scheduled tonight to outline their latest plans to promote a "Green New Deal," their vision for a massive, climate-friendly jobs program.

"When we planned these watch parties, we couldn’t have known they would be the same night of Trump’s State of the Union Address," wrote the group in a recent email. But "as Trump gets ready to spread his message of fear, division, and denial … we’ll be laying out our plans for how to bring the Green New Deal to every corner of this country and elevate the crisis that our President and his fossil fuel billionaire friends want us to ignore," the group wrote.

Trump’s failure to use congressional addresses to speak to Americans about climate change differentiates him from the previous Democratic and Republican presidents. The closest Trump came to mentioning climate directly, perhaps, was a line in his 2017 speech in which he pledged to work with both parties to "promote clean air and clean water." The following year, however, Trump boasted in his State of the Union that his administration had "ended the war on beautiful, clean coal" — a swipe at many on the left, who see curtailing the use of coal as imperative to stopping climate change.

Trump’s approach stands in stark contrast to Obama, who regularly warned of the dangers of climate change while promoting policies meant to address the problem.

In his final State of the Union address, Obama even took direct aim at those who tried to dismiss the scientific consensus that humanity was driving global warming.

"Look, if anybody still wants to dispute the science around climate change, have at it," he said. "You will be pretty lonely, because you’ll be debating our military, most of America’s business leaders, the majority of the American people, almost the entire scientific community, and 200 nations around the world who agree it’s a problem and intend to solve it."

He then called on the country to "accelerate the transition away from old, dirtier energy sources."

"Rather than subsidize the past, we should invest in the future, especially in communities that rely on fossil fuels," Obama said. "We do them no favor when we don’t show them where the trends are going."

Obama isn’t alone among Trump’s predecessors to mention global warming in a State of the Union address. Presidents Clinton and George W. Bush acknowledged the issue, too, with Bush in 2007 highlighting innovative efforts to develop alternative energy sources.

"America is on the verge of technological breakthroughs that will enable us to live our lives less dependent on oil," Bush said. "And these technologies will help us be better stewards of the environment, and they will help us to confront the serious challenge of global climate change."

Infrastructure and the wall

The risks of climate change have only increased since 2007. In the first two years of Trump’s presidency, thousands of Americans have died in extreme storms and wildfires. Scientists have found that both types of events will be worse in a warmer world, putting countless other Americans at greater risk.

But Trump and senior administration officials, including former Interior Secretary Ryan Zinke, have gone out of their way to avoid acknowledging climate’s role in the California wildfires, which they blamed on "forest management" and "environmentalists."

The Trump administration also tried to bury the dire predictions of the congressionally mandated National Climate Assessment that highlighted such risks, but the effort backfired, earning the report several days of national media coverage.

Instead of climate change, Trump is expected to talk tonight about infrastructure, among other topics.

"He will ask Congress to produce an infrastructure package that delivers substantial investments in vital national infrastructure projects," a White House official said last week in a background briefing for reporters on the speech.

After the midterm election losses, Trump said he thinks infrastructure is a potential area for bipartisan consensus. But it’s also one area where Democrats want the administration to address climate change.

In addition to the infrastructure package, Trump may inadvertently create a pathway for a future Democratic president to ram through climate policy if congressional Republicans refuse to budge. Trump has hinted that he may use the State of the Union address to declare a national emergency on illegal immigration, which would allow him to bypass Congress and build a border wall.

A number of Republicans have publicly criticized the plan, including Sen. Marco Rubio (R-Fla.), who said that it could allow a future Democrat to do the same with climate change policy.

Rather than ignoring it, Trump could deliver a similar message as Bush on climate change, but focus on infrastructure as an area where bipartisan agreement is possible, said Sherri Goodman, a senior strategist at the Center for Climate and Security and a deputy undersecretary of Defense in the Clinton administration. She said the military is already creating a road map for how to plan for climate change by ensuring that the infrastructure it builds is strong enough for a different climate in the decades to come.

"As a child of the Cold War, I grew up knowing that the most severe threat we faced during that time was nuclear annihilation by the Soviet Union, and now we face an equally existential risk from climate change, so we need to mobilize all sectors of our creative society to address [it]," she said. "We face this unprecedented risk, but we also have an unprecedented opportunity to marshal American ingenuity, innovation and engineering to address these challenges."

The president’s failure to include climate policy, or even to mention the words "climate change," means Americans will be left vulnerable to the growing existential risk, Goodman said.

"He’s ignoring the climate reality that affects all Americans virtually every day where they live and work. … These places are facing dramatic sea-level rise and have had catastrophic damage in the storms this year, including the wildfires out West," she said. "Extreme weather events and the threat multiplier of climate change are the normal in which we live today, and we need to make our country more resilient."