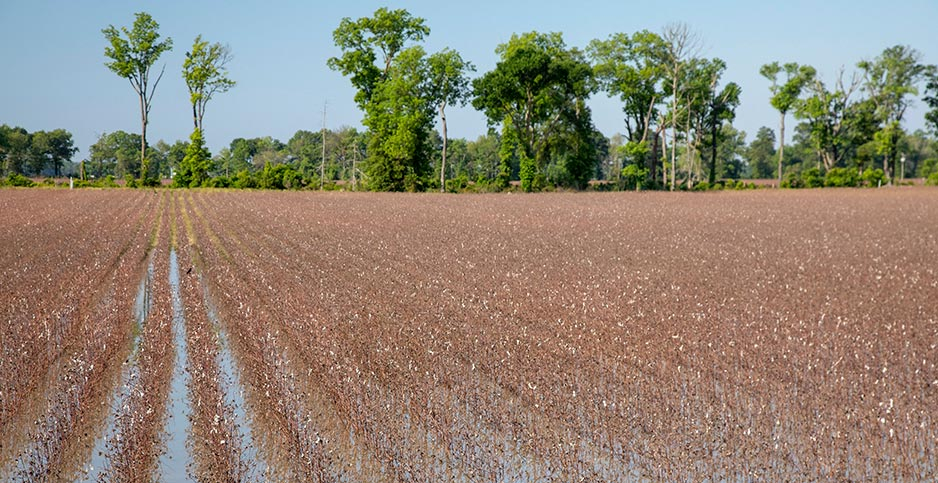 Farm groups recently launched a coalition to promote conservation and reduction of greenhouse gas emissions. Pictured is a cotton field harvested last fall on a flooded farm in the Mississippi Delta. Jim West/agefotostock/Newscom

Major farm groups have hit on a new way to tiptoe around climate change affected by human activity: Call it "climatic events."

That’s the catchphrase in a new initiative by the American Farm Bureau Federation and 20 other farm groups meant to address the ongoing debate about agriculture’s contribution to — and role in mitigating — a warming climate.

The shifting vocabulary illustrates the difficulty some farm organizations and lobbying outfits continue to have acknowledging the scientific consensus that farming plays a part in climate change.

"Climatic events" might mean "weather." It might mean "climate change." Representatives of the groups at a recent news conference acknowledged they’re taking a nuanced approach as they defend agriculture from potential legislation that would force reductions in greenhouse gas emissions.

"The terminology that is used, I think, is important," said Ethan Lane, vice president of government affairs at the National Cattlemen’s Beef Association, announcing the initiative called Farmers for a Sustainable Future (E&E News PM, Feb. 19).

"It’s probably fair to say it runs the gamut," he said. "Whether you use ‘sustainability,’ whether you use ‘climate change,’ they’re not in a Washington, D.C., conversation about the right word. They deal with the conditions on the ground, day to day, year to year."

"I don’t know whether it’s human induced or naturally induced," Formica said. "If the climate is changing, we need to address the fact that it’s changing, and ultimately we all need to become more efficient, and that’s the best way to address all of these issues."

Formica added: "The cause of the challenge is sort of irrelevant to my members. They just want to know what the goal is we have to meet and tell me what the target is."

The effort focuses on conservation measures and what organizers say is an attempt to counter misperceptions about agriculture’s role as officials and lawmakers address climate policy.

Livestock groups in particular face pressure on the issue because cattle, hogs and other farm animals contribute to greenhouse gas emissions through manure and belching.

Livestock interests, as a result, are more subject to climate regulation — especially if they have thousands of animals — and to environmental groups’ calls for a meat-free diet to save the planet.

Because they’re not ruminants like cattle, swine have the lowest emissions factor of farm animals, according to the Cooperative Extension System and the U.S. Pork Center of Excellence, a collaboration among extension specialists at colleges of agriculture, in partnership with the pork industry.

Lobbying groups that work on agriculture issues walk a similar line. A message to the farm policy lobbying group Michael Torrey Associates LLC was returned by a spokeswoman who referred an E&E News reporter to a spokeswoman at the American Farm Bureau Federation, saying the Farm Bureau would have better information.

To farm groups that embrace the concept — and terminology — of climate change, the big organizations’ sustainability initiative appears to be mainly about political expedience.

A representative of one farm organization, requesting anonymity to speak openly about other groups, said the effort may fizzle once election season ends, having fulfilled its role as a talking point for Republican congressional candidates skeptical of climate change policy but wanting to show voters they’re engaged on the issue.

Yet the big farm groups carry weight in Congress, as well as influence through political action committees, and they largely control the conversation about farm policy.

Another issue potentially at play: the age of the groups’ members. Farm Bureau President Zippy Duvall said that issue is overplayed and that sustainability goals are shared across age lines.

But younger farmers may be more accepting of the language of climate change, said Martin Lemos, co-executive director of the National Young Farmers Coalition in Hudson, N.Y. "There’s definitely a nuance to that," Lemos told E&E News.

Among his membership, Lemos said, there’s "universal agreement" that the climate is changing, "and it’s escalated to a point now where it’s a major business risk."

Farmers he knows are planning for 10 or 20 years down the road, with severe flooding some years, droughts in others, Lemos said. "The variability might even be unmanageable," he said.

But even younger farmers raised in an era of climate change awareness are sensitive to the charge that farming is partly to blame, Lemos said. Agriculture overlaps with other contributors, including the transportation industry, he said.

Deeble said the conversation on climate and agriculture would be more honest if farm organizations more openly acknowledged the scientific consensus. Most farmers know human activity plays a role but are held back by fear of the government’s potential response, he said.

"That is why people who work successfully in this space take a holistic approach and focus on trust," Deeble said. "It’s not a quick process, and it has not matched the urgency of the climate change crisis."