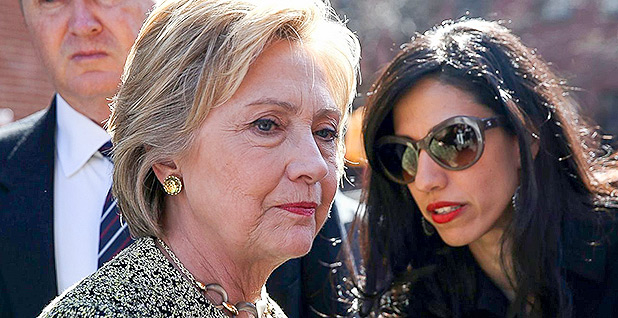 "We could even have her come out against Keystone," a Hillary Clinton aide suggested in 2015 as the campaign sought to quell Clinton's email controversy. Photo courtesy of Flickr.

In August 2015, Hillary Clinton’s campaign was grappling with how to dig out from bad press on her use of a personal email account when she was secretary of State.

One thought: Clinton could voice her opposition to the Keystone XL pipeline as a distraction.

In an email exchange allegedly hacked from Clinton campaign manager John Podesta’s personal account, Clinton aides floated options for how to respond to questions about her use of personal emails while on the job. Reports had surfaced that the FBI was investigating the security of Clinton’s private email servers.

Communications director Jennifer Palmieri suggested a few options for getting Clinton to discuss the issue with reporters. Palmieri preferred a Monday interview with NBC’s Andrea Mitchell, which "gives us best shot of press, Dems and voters feel like she addressed the questions about the emails."

Robby Mook, Clinton’s campaign manager, wrote that "whether the press wants to cover it or not, we have pretty hefty policy to roll out on Monday, so if we get this out of the way Sunday, the policy gives us a nice way to move forward."

He added, "We could even have her come out against Keystone on Monday as well (not sure where that stands), which will solicit criticism but that might help distract from emails."

The hacked emails released by the group WikiLeaks have offered a behind-the-scenes look at how the Clinton campaign grappled with the contentious Keystone XL project. The campaign was nervous about upsetting unions backing Keystone XL and other pipeline projects but also wanted to appease environmentalists and other Democratic constituents opposed to the project (Greenwire, Oct. 27).

Podesta and the Clinton campaign have not verified the authenticity of the leaked emails. They have accused the Russian government of orchestrating the emails’ release in order to affect the U.S. elections.

Clinton received an email in June 2014 from Judith McHale, president and CEO of Cane Investments LLC, who was worried that the initiative "appears to have been pushed pretty far down" in both the Interior and State departments, "and we are concerned that without [White House] prodding not much will happen to move things forward."

Clinton forwarded the email to Podesta, who was then Obama’s White House counselor.

"I know your hands are full, but I don’t want the President’s wildlife conservation initiative to wither away," she wrote. "Please read Judith’s email below and tell me what you and I can do to help. Thanks so much. H."

Podesta replied, "Hands full may be a misnomer. I had my hand operated on on Wednesday and I’m walking around my right hand in a big bandage. I’ll check into this. Good luck this week with your adoring fans and your crazy critics. Seems really good so far."

In November 2014, former Obama White House aide Jim Messina warned Obama aides that a sage grouse listing under the Endangered Species Act would be a "political firebomb in the West," according to another hacked email.

Messina, who founded a political advisory firm after he was Obama’s 2012 campaign manager, told Podesta and David Simas that he was hearing rumors that the grouse was about to be listed by the Interior Department.

That "will set off a bomb out west including [Colorado Gov. John] Hickenlooper saying he will sue Interior. … Do we have to do this?" Messina suggested asking for a court extension to "let the current collaborative process play out with hope of getting a decent plan."

Messina said he was "trying to avoid a train wreck about to explode this week if possible."

‘Talking out of school’

Back in 2008, when Podesta was co-chairman of Obama’s transition operation, Podesta was irked about a Huffington Post story about possible government personnel.

Podesta wrote in an email to Michael Froman, "This list is too close to reality. Someone is talking out of school."

Froman wrote back, "I agree. On one hand, a lot of this is conventional wisdom, but someone/some people are confirming it for them. I am worried that, as we get staffed up in DC, it’s going to get even harder. We should discuss how best to control this."