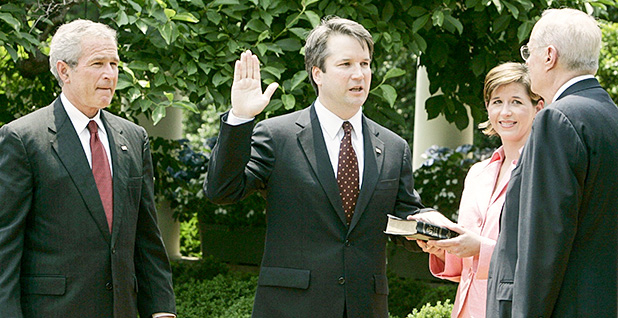 Brett Kavanaugh is a front-runner to replace retiring Supreme Court Justice Anthony Kennedy. Kavanaugh is shown here at his swearing in by Kennedy in the White House Rose Garden in 2006. His wife, Ashley Kavanaugh, holds the Bible as President George W. Bush looks on. Eric Draper/White House

A front-runner to replace retiring Supreme Court Justice Anthony Kennedy has a complicated history with the Clinton family that might subtly nudge his prospects within a Clinton-bashing White House.

Among legal professionals and Supreme Court justices, Judge Brett Kavanaugh has a stellar reputation as a staunch, articulate conservative on the U.S. Court of Appeals for the District of Columbia Circuit. His environmental rulings have pleased the right.

But before he joined the bench in 2006, the Yale Law School graduate made his bones as one of the lead lawyers in Independent Counsel Kenneth Starr’s protracted investigation of President Clinton. Democrats still fume over Kavanaugh’s contributions to Starr’s efforts.

"He produced, with substantial assistance from you, a lengthy report that frequently dwelt on salacious details from President Clinton’s personal life," Sen. Charles Schumer (D-N.Y.) told Kavanaugh at his 2004 Senate confirmation hearing.

Schumer, now the Senate minority leader, and most other Democrats would almost certainly oppose a Kavanaugh nomination to the Supreme Court for reasons beyond his several-year tenure on Starr’s team. Environmental groups, among others, have been stockpiling ammo from Kavanaugh’s opinions (Greenwire, June 28).

For President Trump, though, Kavanaugh’s investigative work that included probing the suicide of a close ally of Hillary Clinton could conceivably provide one more motivation to elevate the 53-year-old appellate judge. As Trump’s allies acknowledge, the president relies on instinct and impression when selecting nominees, and one of his core instincts is animus toward the Clintons.

Trump himself has commented approvingly on some of Starr’s more recent work.

"Thanks you to KenStarr, former Independent Counsel, Whitewater, for your insight and powerful words on FISA, Russian meddling etc.," Trump tweeted on Feb. 18.

Trump was responding to an interview with Maria Bartiromo of Fox Business Network in which Starr implicitly criticized investigators’ focus on alleged Trump campaign activities, urging instead that "we should stop pointing fingers at one another in this country and realize who the real enemy is."

Kavanaugh had clerked for Kennedy and worked for the Justice Department when he joined Starr’s team as an associate counsel in 1994. While with Starr, Kavanaugh led the investigation into the 1993 death of the deputy White House counsel Vincent Foster Jr.

Foster was considered close to Hillary Clinton, and his death-by-gunshot prompted lurid conspiracy theories, some surrounding the then-first lady herself. One of Trump’s outside advisers, Newsmax Media founder and CEO Christopher Ruddy, wrote a 1997 book titled "The Strange Death of Vincent Foster."

In a 2016 interview with The Washington Post, Trump called the circumstances of Foster’s death "very fishy" and added, ominously, that "he had intimate knowledge of what was going on."

Kavanaugh and the independent counsel’s office, though, concluded that the depressed 48-year-old Foster had committed suicide.

Kavanaugh left the independent counsel’s office in 1997 but returned the next year to handle an appeal to the Supreme Court over Starr’s effort to obtain notes taken by Foster’s lawyer, contending that the lawyer-client privilege ended with death. He also helped write Starr’s final report.

"I helped on the grounds section of the report, which outlined possible grounds for an impeachment," Kavanaugh told senators at his appellate confirmation hearing.

The grounds section, like other parts of the report, starts with the warning that "some of the language in these documents is sexually explicit."

The section co-written by Kavanaugh concludes with the finding that there was "substantial and credible information that President Clinton obstructed justice … by lying under oath and concealing evidence of his relationship with a young White House intern and federal employee, Monica Lewinsky."

Since then, Kavanaugh has provided senators and White House officials with a lot more judicial material to consider. It’s not always black-and-white.

Still, every inquiry into the potential Supreme Court nominee, and possibly Trump’s own consideration, will eventually come face-to-face with Kavanaugh’s career-shaping role in the impeachment of a past president.

"Where there is a tough job that needs a bright, hard-nosed political lawyer," Schumer said in 2004, "Brett Kavanaugh has been there."