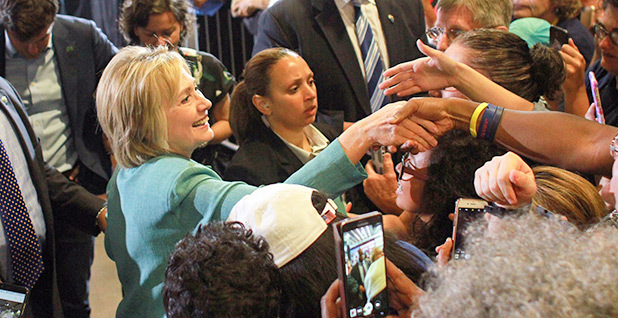 LAS VEGAS — Hillary Clinton called for a "modern grid" and billions of dollars in added infrastructure investments yesterday at an electrical workers’ union in the swing state of Nevada.

The Democratic presidential nominee laid out her plan to build roads, bridges and ports — but also power grids.

"It’s not only what you can see; it’s also under the ground, the water systems, the sewer systems, and yes, we need a new modern electric grid to be able to take and distribute all the clean renewable energy," she told a crowd of several hundred supporters, who led cheers for "rooftop solar" earlier in the afternoon rally.

It’s unclear how far Clinton’s message will resonate outside the walls of the local chapter of the International Brotherhood of Electrical Workers. Las Vegas was ground zero for the housing crash near the end of George W. Bush’s administration, and many union workers have yet to recover from one-two punches to their home values and pensions. Thousands of properties in the region went into foreclosure in the depths of the 2008 financial crisis.

Clinton’s perceived ties to big banks may haunt her here even as she pledges to bring renewable energy jobs to a state that has seen its unemployment rate linger above the national average in recent years.

"Hillary’s not completely transparent about that," he said, standing amid a small group of anti-Clinton protesters outside the union hall.

He also took issue with Clinton’s history with the Trans-Pacific Partnership, which she now opposes but had previously endorsed as a diplomatic and economic achievement for President Obama. The TPP has drawn scorn from many blue-collar workers like Foree, who said he will refuse to vote for Clinton or her Republican rival Donald Trump. "I’ve watched our jobs go to China because of these trade deals," he said.

Clinton met with some of Foree’s union colleagues in a tour of Mojave Electric Co., an electrical contractor that designs and builds low-voltage systems in the region.

She said that, if elected, she would grant a $1,500 tax credit to companies that offer paid apprenticeships for new workers in various technical industries. "I think it’s really important that we do more of what I saw at Mojave today," Clinton said.

Grid operators and regulators have struggled with how to price out and integrate renewable resources in Nevada. The state’s Public Utilities Commission recently raised fees and slashed payment rates for rooftop solar users hoping to sell their excess power generation back into the grid.

"I don’t think people who go get solar panels should be charged more money," said Cherlyn Oshiro, 66, a longtime Las Vegas resident and Clinton supporter who attended yesterday’s rally. She said her concerns in the election include protecting Social Security and clean energy. "If we go through the trouble of having solar energy, we should not be taxed on it."