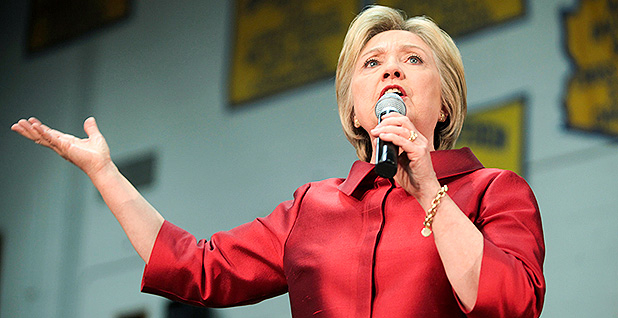 Hillary Clinton's advisers have been scrutinizing options to drive reductions in greenhouse gas emissions beyond the Clean Power Plan, according to emails. Photo by Gage Skidmore, courtesy of Flickr.

Hillary Clinton’s advisers have been looking closely at a carbon tax since at least late 2014, according to detailed internal memos from hacked emails released by WikiLeaks.

Although the Democratic presidential nominee consistently avoided engaging on the subject despite prods from her primary opponent, Sen. Bernie Sanders of Vermont, her inner circle of climate strategists had already been conducting studies on behalf of the campaign to explore the cost and political impacts of various proposals.

In addition to looking at enacting a $42-per-ton, energy-sector carbon tax through legislation, advisers widened their research to consider incentivizing overcompliance with the Clean Power Plan or using Section 115 of the Clean Air Act to write economywide cap-and-trade regulations.

In a memo dated March 11, 2015, three advisers noted a Clinton administration would have to find additional ways to cut carbon emissions in order to meet international agreements.

"The significant steps that the Obama administration is taking to accelerate clean energy deployment and reduce domestic greenhouse gas emissions is putting us on track to achieve our 2020 climate target of a 17% reduction below 2005 levels," they said. "But, as you well know, additional action will be required to reach our 2025 target of 26-28%, and in particular the deeper reductions required by 2030 to remain on track to meet our long-term climate objectives."

"While a GHG fee would clearly face stiff opposition from Republicans and some Democrats, one could potentially attempt to build support for it by using some share of the revenue for corporate income tax reform, and/or link it to a lifting of the crude oil export ban or approval of new oil and gas infrastructure," they said. "Republicans would also likely push for some level of pre-emption of EPA and/or state GHG regulations, so proper sequencing with 111d would be critical so as not to undermine the Clean Power Plan."

"Jake and Dan sent us an email yesterday saying they were interested in hearing more about non-carbon tax elements of a climate plan (based, I think, on conversations with you) so we can also share this with them," Ogden wrote.

The March memo expanded on an earlier analysis from January 2015 that focused solely on a carbon tax and an initial "Climate Change Framing Paper" the campaign received in December 2014.

Neither Podesta nor the Clinton campaign has verified the authenticity of the emails. Citing intelligence sources, they have blamed Russia for hacks meant to disrupt the election.

The documents refer to the carbon tax as a "GHG pollution fee" that unlike a cap-and-trade program could be applied "upstream," when fossil fuels are extracted. They studied setting it at $42 per ton, based on the federal government’s estimate of the social cost of carbon. That level would "ensure polluters are paying the damage to the climate their emissions cause and would create a powerful incentive for clean energy deployment and energy efficiency improvements," they wrote.

"We were asked to develop a proposal for a GHG pollution fee," the memo said. "In brief, our proposal called for a tax (pollution fee) on CO2 emissions from coal, oil, and natural gas combustion, as well as some major sources of other GHG emissions. The revenue would be directly returned to households, with the exception of a relatively small share dedicated to transition assistance for coal miners and communities."

The memos include detailed analysis of how much households would pay for energy with and without a carbon tax. Household energy costs would rise compared with a business-as-usual scenario but remain below recent levels, the writers found.

They noted that average household energy costs would increase by roughly $480 per year, or 10 percent relative to current costs, and gasoline prices could go up 40 cents per gallon on average between 2020 and 2030.

But they said "the increase in energy costs would be more than offset by the pollution rebate for all households."

The documents explore programs to assist coal communities with the sector’s decline, noting there were 78,000 coal miners in the country, half of whom were located in West Virginia, Kentucky and Pennsylvania. Alabama, Illinois, Ohio and Wyoming are also home to large coal mining employers. They also looked at retraining opportunities and pension redevelopment.

The Clinton advisers noted clean energy subsidies, like the production tax credit and investment tax credit, are "becoming increasingly expensive and less effective" in the face of the Clean Power Plan, state renewable portfolio standards and general technological development. They suggested the tax credits could be phased out, with savings reinvested in a clean energy competition.

The advisers also laid out possibilities for regulating methane emissions from the oil and gas sector.

"We are assuming the Obama administration will issue rules to control methane emissions from new oil and gas wells, but there will be an opportunity for her to take the next important step by supporting controlling methane from existing wells and distribution system," they said.