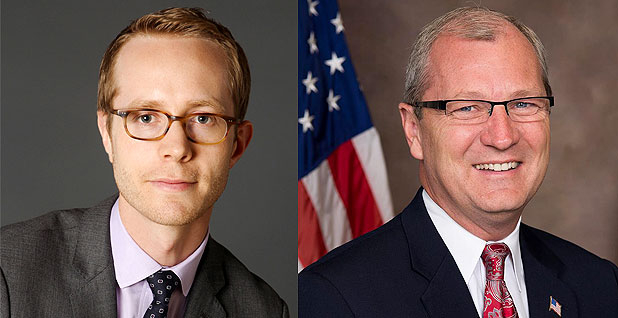 A surrogate for Republican presidential nominee Donald Trump doubled down yesterday on promises to exit the Paris climate agreement and enact a technology-neutral energy strategy in the hope it might help the struggling coal industry.

But he also questioned whether humans are in fact contributing to climate change.

"We’d have to be a bit proud to think that somehow these last hot years are the fault of man and not some larger regular cycle of climate," Cramer said. When pressed further, Cramer said he personally thinks climate change is "grossly exaggerated" and that "the vast majority of Americans are neither climate deniers nor climate worshipers."

"I think the vast majority of Americans want a reduction in CO2 emissions," Cramer conceded. But he said he doesn’t share in the "alarmism" of environmental advocates and thinks issues like domestic and global terrorism are more pressing.

"We’re not going to put diapers on cattle, nor are we going to quit eating beef," he said, noting the agricultural sources of methane emissions.

Houser countered that if Trump were elected president, he would be the only leader out of 195 nations who doesn’t acknowledge human contributions to climate change.

"I don’t know how the Republican Party got to this point," Houser said, pointing out that in 2008, GOP presidential nominee John McCain said slowing climate change was one of his top priorities. This year’s Republican Party platform, on the other hand, is a "line-by-line attack on our bedrock environmental laws, most of which were enacted by Republican presidents," Houser said.

Accusation of ‘false promises’ on coal

The 90-minute debate offered the first side-by-side comparison of Trump and Clinton’s starkly different energy policies. None of the presidential debates drilled into the topic.

Cramer called the Paris climate accord a "bad trade deal" and said the president cannot obligate the country to it unilaterally.

He said Trump would either walk away from the deal, which might be "somewhat problematic," or call for a ratification vote in the Senate, which he thinks it would not pass.

"That would send a very strong signal not just to global partners but to the people of the U.S. that our Constitution is still intact," Cramer said.

The outcome of that vote would likely depend on whether Republicans will still hold a majority of Senate seats after the election, however.

Houser charged that Trump believes climate change is a "hoax" propagated by the Chinese, that he is against renewable energy development despite the jobs it would create and that he has a "strange obsession" with blaming the Montreal Protocol for making his hair spray less effective.

He said Trump makes "false promises" that coal, oil and gas production can be an engine of the economy over the next century "and that we can wish away climate change."

"It’s easy for Donald Trump to show up to a rally and put on a hard hat and promise to return coal to its glory days," but the truth is that the coal industry has been in decline for a long time, Houser said.

"It is difficult, but we owe it to the people who have kept the lights on and the factories running for more than a century to have an honest conversation about what’s happening in the market," he said, touting Clinton’s plans for helping former coal workers.

Cramer did not offer specific ideas for assisting coal communities but said the government should not be "picking the winners and losers, but letting the market pick the fuel source."

Would he or wouldn’t he shutter EPA?

Trump has said he would dismantle EPA, but Cramer pulled back on that vow. He said Trump would "take a hard look" at the agency and get it back to its "core mission" of promoting clean water and clean air.

Cramer attacked the Clean Power Plan, arguing that it wouldn’t make a dent in global greenhouse gas emissions and that other countries might not follow the United States’ lead. He said the federal climate rule is designed to kill industry and put coal miners out of business.

States have already cut power-plant carbon emissions 27 percent since 2005, meaning they are 84 percent of the way to the final goal of the Clean Power Plan with 14 years to go, Houser noted. But Cramer insisted that meeting the requirements of the Clean Power Plan would be impossible for states like North Dakota, which have the toughest targets because they run on the most coal.

When Cramer advocated leaving fuel choices to the market, a member of the audience questioned whether private companies would act in the interest of public health. Cramer said industry at least needs a seat at the table, and Houser insisted that utilities and others were involved in writing the final Clean Power Plan. EPA listened to their requests for a carbon trading system, he noted.

The two energy advisers also squared off on the merits of different power sources.

Houser said natural gas has an important role to play in the U.S. transition away from coal, "if the right safeguards are in place."

He said zero-carbon nuclear power should also be valued for its climate benefits, for those existing plants that are safe to operate.

The United States should invest in advanced nuclear technologies, he said, as well as renewable power, energy efficiency, biofuels and carbon capture and sequestration for fossil fuels.

"Climate change is too important an issue to take any technology solution off the table," Houser said.

Cramer said nuclear power is "a very exciting option because it is emissions-free."