Clinton wants to close a fracking ‘loophole,’ but then what? 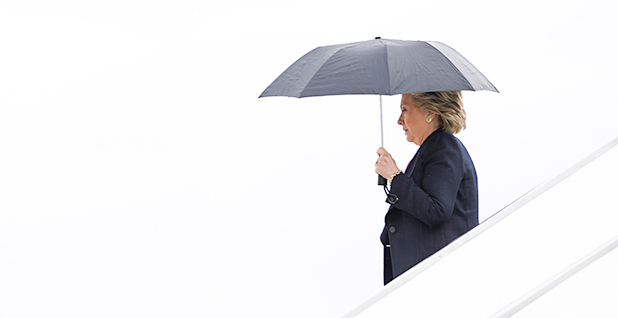 Closing what’s known as the "Halliburton loophole" is the clearest oil and gas policy goal of Democratic presidential nominee Hillary Clinton. But it’s not clear what her proposal would do.

On one hand, it would appear to not matter much. When it was passed in 2005, the oft-misunderstood environmental exemption for hydraulic fracturing merely cemented the legal status quo.

On the other hand, regulatory experts say small tweaks in wording could transform regulation of oil and gas by putting U.S. EPA in charge.

Either way, though, it is unlikely to happen if Republicans retain either chamber of Congress in the November elections. Increased regulation of oil and gas drilling is a non-starter for the GOP.

But during the Democratic primary, Clinton’s end-the-loophole proposal was a way to blunt the appeal of rival Bernie Sanders’ call to "ban fracking."

"It’s a great campaign line," Book said. "If you want to appeal to the environmental base, it’s helpful to use terms like ‘Halliburton’ and ‘loophole.’"

The proposal to kill the loophole surfaced at a party platform committee meeting in June. Former U.S. EPA chief Carol Browner, representing Clinton, rejected a full ban on fracking proposed by Sanders’ supporters. Instead, she suggested reversing the exemption.

"We believe it needs to be regulated," Browner said.

During the Democratic National Convention in July, Clinton energy adviser Trevor Houser reiterated that Clinton wants to take aim at the "Halliburton loophole."

Clinton’s support for such legislation is clearer than her assertion that "by the time we get through all of my conditions, I do not think there will be many places in America where fracking will continue to take place" (E&E Daily, March 7).

Strong as it sounded at a debate in March, the statement left Clinton with a lot of room to maneuver. Her conditions included local support, but most drilling occurs in areas where it enjoys strong political backing. She also said she would oppose it where "contamination of water is present." Groundwater contamination is a recognized hazard in drilling, but it’s difficult to prove, and it doesn’t happen with every well.

Republican nominee Donald Trump has been even less clear in his positions on oil and gas. He’s said he wants to cut regulations on fossil fuel production, but he’s perplexed energy executives by supporting local control of drilling and seeking a "piece of the action" in exchange for approving the Keystone XL pipeline.

How a paragraph changed industry

What has come to be called the "Halliburton loophole" was a one-paragraph section of the 551-page Energy Policy Act of 2005. It exempted hydraulic fracturing from the Underground Injection Control (UIC) provisions of the Safe Drinking Water Act (SDWA). The UIC portion of the law regulates holes drilled to inject industrial waste deep underground.

EPA had never sought to regulate fracking under that part of SDWA. But in 1997, a federal appeals court ruled that the UIC provisions of the law applied to fracturing coal-bed methane wells in Alabama. State drillers started using drinking-quality water to frack coal seams. The rules also required companies to survey for drinking water wells near where they planned to drill.

On Capitol Hill, industry backers drafted language to undo the appeals court ruling and exempt fracturing from the UIC portion of the safe drinking water law.

Halliburton Co., the oil field services firm that became a target of liberals during the Iraq War, lobbied for the exemption while Dick Cheney ran the company. After becoming vice president under President George W. Bush, Cheney shepherded the energy bill for the Bush administration. The bill, including the fracking exemption, passed when Republicans controlled both chambers of Congress. President Obama, then a senator, voted for the bill. Then-Sen. Clinton voted against it.

The exemption stopped the precedent from spreading to other states, although Alabama kept most of its rules.

Repealing the exemption would restore the legal state of affairs from 1997. Litigation would be required to expand the precedent beyond Alabama. Until then, little would change, if anything.

"It’s always been much ado about nothing," said John Veil, an expert on energy and water issues who used to manage the water policy program at the Argonne National Laboratory. "It put into statute what states were already doing."

But subtle changes in wording can make a big difference in this debate. The main legislative proposal for closing the "loophole" wouldn’t just end the exemption. It would reverse it and decree that hydraulic fracturing must be covered by the underground injection portion of SDWA. That would put EPA in charge and could shift permitting times from days to months.

"The industry would be devastated," Veil said.

The legislation is Rep. Diana DeGette’s "FRAC Act" (H.R. 1482). The acronym stands for "Fracturing Responsibility and Awareness of Chemicals." It also includes a provision requiring disclosure of fracking chemicals, except for trade secrets.

DeGette (D-Colo.) disagrees with the idea that her bill would devastate the industry. She considers it to be "just creating a minimal federal standard." And she sees it as a sensible middle ground compared to the demands of constituents who tell her fracking must be banned.

DeGette notes that she has the support of one Republican member, Rep. Chris Gibson of New York. And she said at least two oil and gas companies have been at least "positive" about the legislation in her conversations with them. She said Noble Energy Inc. has been "supportive of the concept" while Anadarko Petroleum Corp. has been "positive" about the bill.

"This is a common-sense, middle-of-the-road compromise," she said.

An Anadarko spokesman referred questions about the bill to a spokesman for the American Petroleum Institute, who reiterated the group’s preference for state regulation. Noble didn’t provide a response to a question from EnergyWire.

If DeGette’s bill were to pass, the result would likely fall somewhere between devastation and business as usual.

Such a law would give EPA authority to oversee fracking operations all over the country. In most oil and gas states, state agencies would continue to regulate fracking, but with EPA supervision. That’s because EPA already has agreements with those states to enforce underground injection laws. In Pennsylvania, where no such agreement exists, permits for fracturing would have to come straight from EPA.

Injection rules generally require more scrutiny than rules covering production wells and fracturing. They require a "mechanical integrity test" and a search for other wells in a quarter-mile radius around the proposed well.

But what might shock the industry most is that the rules allow for opponents to demand a public hearing on each injection well. That’s one reason that permits for wells to inject wastewater can take months or longer. Most state governments issue permits to drill and "frack" production wells in a matter of days or weeks.

Any such slowdown wouldn’t happen right away. Current UIC rules don’t cover production wells, so EPA would probably need to write new rules. That would take two or three years. EPA might decide to do a study before starting the rulemaking process — another two or three years. And most new rules of that magnitude get challenged in court; again, two or three more years.

On the other hand, an environmental group could sue to shut down all fracking in the country until rules are approved — a long shot. Such a sweeping moratorium would put a stop to most drilling activity (more than 65 percent of new wells are fracked), although production could continue from existing wells.

But even without such a dramatic ruling, a new cloud of legal uncertainty would hang over the industry until rules were in place.

"It would certainly be chaos," said Rep. Kevin Cramer (R-N.D.), whose state has been transformed by shale oil drilling and who is advising Trump on energy issues. "The effect is always the uncertainty it creates for future investment."

But supporters, such as John Noël of Clean Water Action, say that when it comes to ensuring that drinking water is safe, inconvenience shouldn’t matter.

"It should not be anyone’s job to dilute protections," Noël said, just to "accommodate the industry’s schedule."