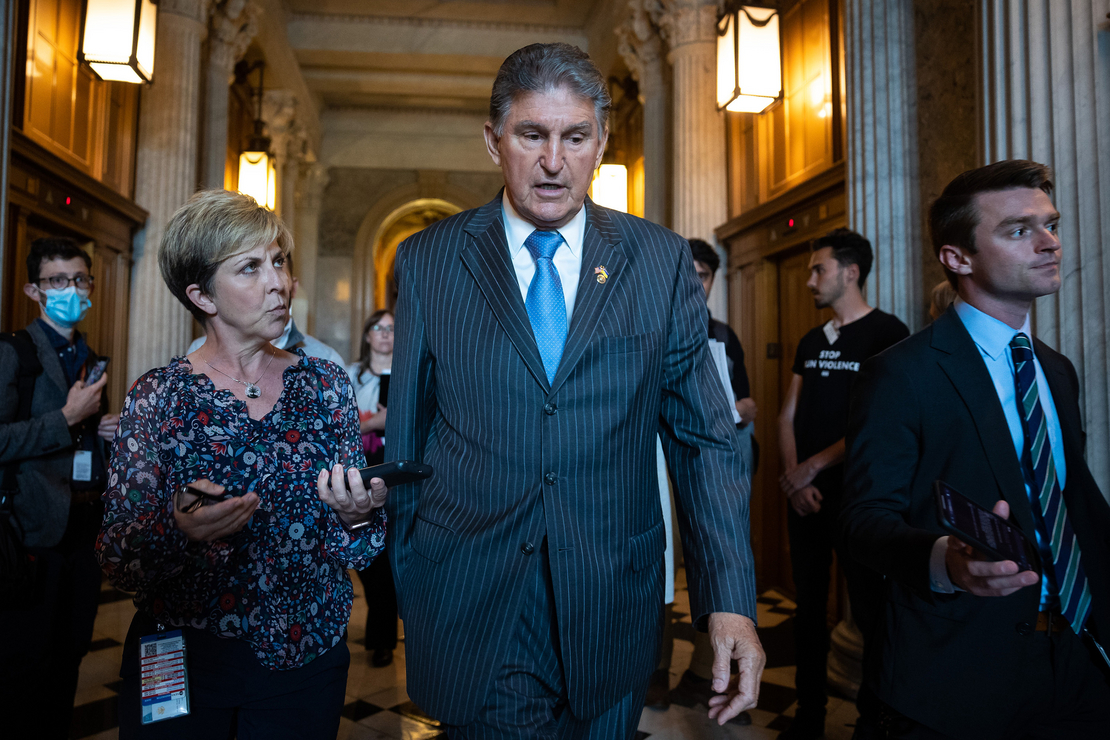 Sen. Joe Manchin’s climate and energy gang met for the fifth time yesterday, but after a month of talks, they emerged no closer to putting pen to paper on a bipartisan bill.

The group led by the West Virginia Democrat again discussed a hodgepodge of pro-fossil fuel and greenhouse gas emissions reduction policies with little hard agreement on what, exactly, an eventual bill would look like, according to senators in the room.

Appetite for energy policy is high on Capitol Hill amid the supply crunch spurred by Russia’s invasion of Ukraine and the demise of the “Build Back Better Act,” Democrats’ partisan climate and social spending bill. But with little apparent progress, the gang is beginning to run into the realities of the snail-paced Senate.

The chamber is about to leave town for a weeklong Memorial Day recess, barring a schedule change to take up gun control legislation after the school shooting in Uvalde, Texas.

In congressional time, that means the clock is quickly running out to develop and whip votes for a substantial piece of bipartisan legislation ahead of the midterms, a situation members of the group acknowledged last night.

“The bottom line is we got some tight windows here we have to work in, but we’ll see,” Manchin, the Energy and Natural Resources Committee chair, told reporters after the meeting. “We’ve just got to make some decisions here.”

Sen. Kevin Cramer (R-N.D.) pinned down July 4 as a potential deadline, saying Republicans may start looking toward a future majority if the group doesn’t ramp up talks by then.

“I suspect it’d be a very different scenario after the election in terms of opportunities [for Republicans],” Cramer told reporters.

There appeared to be fewer lawmakers present yesterday than at the last few meetings. Democrats other than Manchin, as they have after past huddles, largely declined to comment.

Senate Environment and Public Works Chair Tom Carper (D-Del.) would not comment as he emerged from the room, while Sen. Mark Kelly (D-Ariz.) simply said the meeting was “productive.”

Manchin said writing a bill would be relatively easy if the group reaches that point. It would effectively be an exercise of picking and choosing what they like from the House-passed “Build Back Better Act” and putting it together with policies to boost domestic oil and gas production and address fossil fuel geopolitics after Russia’s invasion.

Lawmakers on both sides of the aisle also have long-standing legislative proposals to reform permitting and boost domestic critical minerals production.

“All you have to do is look at what has been written before and what’s come over and look at that,” Manchin said.

He added, “the war has changed everything, and we need to know that. The world is unstable.”

‘Question is whether we will ever have a bill’

Discussions have been wide-ranging since the group first began meeting late last month. Manchin and the Republicans are looking for ways to increase domestic oil and gas production, overhaul energy permitting and create a domestic critical mineral supply chain.

Those policies could serve as a compromise to get the GOP on board with parts of the $300 billion suite of clean energy and electric vehicle tax credits contained in the Democratic budget reconciliation bill. The group discussed that laundry list of incentives at a meeting earlier this month (E&E Daily, May 5).

Yesterday, attendees said discussion centered on the fossil fuel side of the potential package, as well as on methane emissions.

The group has also consistently been talking about a carbon border adjustment, essentially a tariff on emissions-intensive goods imported from abroad. Traditionally, that policy is proposed in conjunction with a domestic carbon tax, but Republicans are interested in the tariff alone, without a price on carbon at home (E&E Daily, May 4).

Still, the gang has not yet resolved whether a bipartisan bill that could garner 60 votes in the divided Senate is possible at all.

For all the recent Republican talk about a carbon border adjustment, for instance, the GOP has not put a legislative proposal on the table, and it’s not clear there are 10 senators in the party who would publicly support the idea.

“We’re not at the point of having a bill,” Romney said. “And the question is whether we will ever have a bill or whether instead there will be a move through reconciliation for those items that the Democrats agree on.”

Manchin, who killed the “Build Back Better Act” last year, is the key to reconciliation, which allows Democrats to pass certain policies into law on a party-line vote.

He has in recent months broadly outlined his support for a narrower reconciliation bill that would reduce the deficit by reforming the 2017 GOP tax law and include drug pricing and climate provisions (E&E Daily, May 24).

Asked last night about the clean energy tax provisions of the “Build Back Better Act,” Manchin suggested there is a possibility they’re left out.

“We’re looking to see if there’s a pathway forward for that, and if there’s going to be a climate or energy bill, or is this just going to be just a tax bill because the only thing we all agreed on was the tax changes that were made in 2017 were weighted unfairly?” Manchin said.