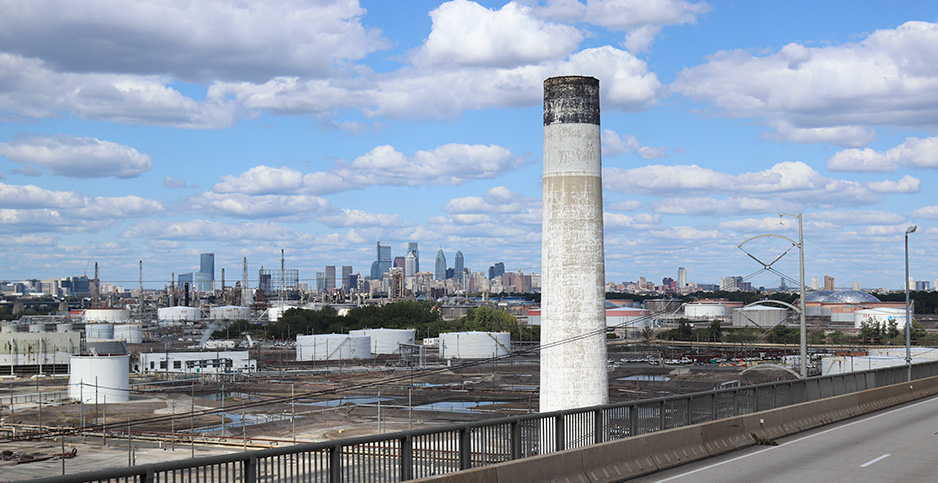 The Philadelphia Energy Solutions refinery continued to emit concentrations of benzene far above EPA’s limit for the carcinogenic gas even half a year after a June 2019 catastrophic fire shut down the 150-year-old oil processing facility, newly released data shows.

The previously unreported benzene data, posted online by EPA last week, raises fresh questions about what the private equity-owned company and regulators are doing to protect people who live near the PES refinery from decommissioning activities and legacy pollution, environmental experts and activists say.

In December 2019, the data shows, the refinery’s average annual benzene emissions level was 49 micrograms per cubic meter of air — more than five times the EPA limit.

The site’s emissions average is calculated from EPA-required benzene readings taken every two weeks at passive air monitors placed around the perimeter of the refinery and released to the public quarterly. Nine of those readings in the last quarter topped EPA’s benzene "action level" of 9 micrograms per cubic meter of air, including several that were above 30 micrograms.

Two of those high measurements, taken from monitors near the southeast corner of the refinery, were "related to fugitives during benzene tanks de-inventory operations," PES told EPA. "De-inventory is part of shut down of [refinery] processing operations."

Peter DeCarlo, an environmental engineering professor at Johns Hopkins University who lives just north of the refinery, said the data illustrates the difficult task ahead for PES and Hilco Redevelopment Partners, which agreed to purchase the heavily contaminated complex for $252 million during a bankruptcy auction earlier this year. The privately owned Chicago-based firm intends to demolish the 330,000-barrel-per-day refinery — once the East Coast’s largest — and build a mixed-use industrial park in its place.

"There is a legacy — a tail after industrial activities have ended — where there still is pollution that gets into the air from either the stuff that’s left over or the water and land that have been contaminated," he said.

The 1,300-acre site has been used for oil storage since the 1870s. But with its location 3 miles from downtown Philadelphia and easy access to transportation by road, rail or the Schuylkill River, the polluted property remains an attractive piece of real estate.

The shuttered refinery’s ongoing benzene problems, DeCarlo added, also raise questions about the commitment to safety by PES, a company created by the Carlyle Group in 2012. But, after two bankruptcies in as many years, the company is now mainly owned by Credit Suisse Asset Management and Bardin Hill Investment Partners, its former creditors.

"My impression is that they were in it to make money, make it quickly and then get out," he said of Carlyle, which is now a minority investor in PES. "If they’re not interested in doing proper remediation, that would be in line with that assessment of their financial motivation."

Gary Epstein, a spokesman for Hilco, said the site’s next owners are "focusing all our efforts on closing the transaction, which is on schedule, as we work toward finalizing our responsible, sustainable redevelopment plan."

Earlier this year, a watchdog group’s analysis of benzene data from every refinery in the United States found PES had the highest annual average emissions. The refinery is across an expressway from schools, parks, a strip mall and hundreds of homes (Greenwire, Jan. 16).

Chronic exposure to even low levels of benzene is linked to an increase in cancers, especially leukemia. High short-term exposure to the chemical — a component of crude oil and refined gasoline — can interfere with the formation of red blood cells and harm people’s immune systems.

EPA began requiring refineries to monitor benzene in 2018 because the carcinogen is present in nearly every stage of the refining process and serves as an indicator chemical for leaks of other hazardous air pollutants.

PES has been reporting benzene emissions to EPA and the city of Philadelphia since early 2019. But regulators have said little to the people who live and work near the refinery about its consistently high benzene emissions, according to Dr. Marilyn Howarth, the director of community outreach at the University of Pennsylvania medical school’s Center of Excellence in Environmental Toxicology.

"It’s one thing to have an excursion for one day that then goes away," she said. "But here, in one location, you have excursions over a several month period. The community deserved to know that."

In statements provided to E&E News, city and federal regulators both emphasized that the refinery’s benzene readings weren’t necessarily a threat to the community since the concentration of the gas diminishes to some extent the farther one gets from the fence line.

"We don’t have information that explains to us why" the benzene levels are still so high, said James Mullison, a member of Philly Thrive.

"There’s a lot of open questions as to how exactly we’re going to remediate all of the oil byproducts and the hydrocarbons that have been dispersed into the soils over a 150 years of oil refining," he said. "How is all that going to be cleaned up in a way that’s safe for this community?"