Closing in on a solar power breakthrough 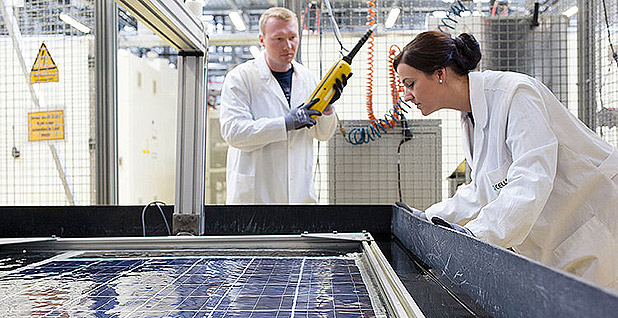 BEDFORD, Mass. — Frank van Mierlo holds his dream in one hand — a hair-thin wafer of silicon, the platform for a solar power cell. After nearly 10 years and $100 million of investment, the dream is on the doorstep of happening.

Next year, van Mierlo’s startup, 1366 Technologies, is set to break ground on a new wafer manufacturing plant between Buffalo and Rochester in rural upstate New York.

There, the company expects to produce wafers at half the cost of conventional units, thanks to a still secretive process that lifts individual wafers from molten silicon, rather than the standard process that saws the units from cast ingots, wasting the silicon where the saw cuts through.

"Nobody is close. We can produce the wafer at 30 cents a wafer," van Mierlo said, alongside a testing machine at the Bedford plant that discharged a stream of checked-out wafers. "Even at today’s prices, you are still very profitable. At today’s prices, nobody else is profitable. That is the point.

"There’s no false modesty here. Our technology is truly revolutionary when it comes to reducing costs," van Mierlo said.

The validation of the dream has come in stages, beginning with the enlistment of other alumni of the Massachusetts Institute of Technology willing to throw in with a then-audacious campaign to make solar power as cheap as electricity from coal. Then came startup funds from venture capital investors who were patient to wait a decade to find out whether the breakthrough would be real, van Mierlo continued. In 2011, 1366 Technologies got two Energy Department grants totaling $7 million and a $150 million DOE loan guarantee for commercialization of its Direct Wafer production method. More backers arrived.

This year, it signed with Hanwha Corp.’s global solar unit manufacturer, Hanwha Q Cells, to buy its wafers. Another part of the Seoul, South Korea, conglomerate Hanwha Investment Corp. has advanced $10 million toward construction of the New York plant.

Following that, Wacker Chemie AG agreed to supply most of the purified polysilicon for its wafer production. The giant German manufacturer also will make a $15 million investment as a prepayment for the silicon deliveries, the companies announced.

Van Mierlo hoped to start work on the plant this year, but permitting and red tape has slowed it down, he said. "We’re moving," he said. "It’s certainly not moving as rapidly as one might hope." Now the target is 2017.

"It’s going to be a stretch — the end of the year rather than the beginning," van Mierlo said. "We definitely want to be in construction next year."

"We are in the process of getting ready for groundbreaking for the office park in the spring," says Shari Voorhees-Vincent, a spokeswoman for Empire State Development. "At this point, we’re full steam ahead."

Barring setbacks, the plant will start with 40 furnaces and produce 50 million wafers per year, representing output of 250 megawatts when the wafers are finished into solar cells. The goal, in time, is to raise production fourfold.

Van Mierlo and colleagues deliberately took the long route, spending precious investment capital on the Bedford facility to prove that laboratory methods could be converted into a full-scale production furnace that would be the prototype for factory machines (ClimateWire, Feb. 1, 2013).

"This is a really important distinction," he said. "We did this intermediate step, this demonstration facility here in Bedford. Most people skip it. It’s just cost.

"This is operating every single process at full scale. We have already built three generations of full-sized production machines," he said. "There is no scaling risk."

The furnace process is still off limits to visitors. "We spent $100 million developing the core technology, so the exact way we do things will continue to be hopefully something that is proprietary," van Mierlo said.

"But the basic principle is easy to grasp. Today, you make wafers with all this cutting and sawing, with 12 different operations," beginning with the casting of the silicon ingot. The 1366 Technologies process lifts the wafer directly from molten silicon in a furnace.

"We simply freeze the top of the melt and pick off the wafer and just bypass a whole bunch of steps," van Mierlo said, "just like you make float glass."

The venture’s starting point was the proverbial blank sheet of paper, van Mierlo said. Flush with funds from the sale of his robotics company in 2005, he began by quizzing colleagues and experts for ideas about potential breakthrough goals (ClimateWire, Feb. 1, 2011).

Michael Zak, a general partner of Charles River Ventures in Cambridge, Mass., suggested energy. "It seems that was the most interesting problem of the century," van Mierlo said. Solar power appealed because it’s ubiquitous, and silicon was chosen for the same reason. "Very close to the ideal," van Mierlo said. "It’s a safe material, very compatible with life. And there sure is a lot of it.

"The first decision was, I’m going to go for it. Then the next decision was doing something in energy. Then it was solar," he continued, rapping knuckles on a table to punctuate each of the steps. "Then we looked at silicon and said, ‘Let’s reinvent the wafer.’"

In addition to matching coal’s price as an energy source, van Mierlo said he wanted the invention to have real roots in the United States. The silicon for the wafers will come from Wacker’s new $2.4 billion plant in Charleston, Tenn. Although the solar cells will be made by Hanwha, the Korean firm supplies NextEra Energy Inc., the Florida-based solar power developer.

Van Mierlo said that people with very daunting tasks often face temptations to quit. There is an exit early along the arduous Appalachian Trail route that many hikers take when they realize what they’re in for, he said. The energy business has famous accounts of wildcatters who stayed to drill one more hole, and that was the one that hit pay dirt, and others who gave up.

"Even the largest successes inevitably are preceded by a period where it is so easy to lose hope and to be skeptical, and there is always this huge group off naysayers out there that say you’ll never find oil. It will never work," he said with a laugh.

One potential offramp appeared for his venture in 2009, when all they had was a tiny test wafer 1 centimeter square. "You are so far removed from a commercially successful machine that has the yield and the up time and the throughput and quality that’s needed that, you know, many people would have just given up," van Mierlo said.