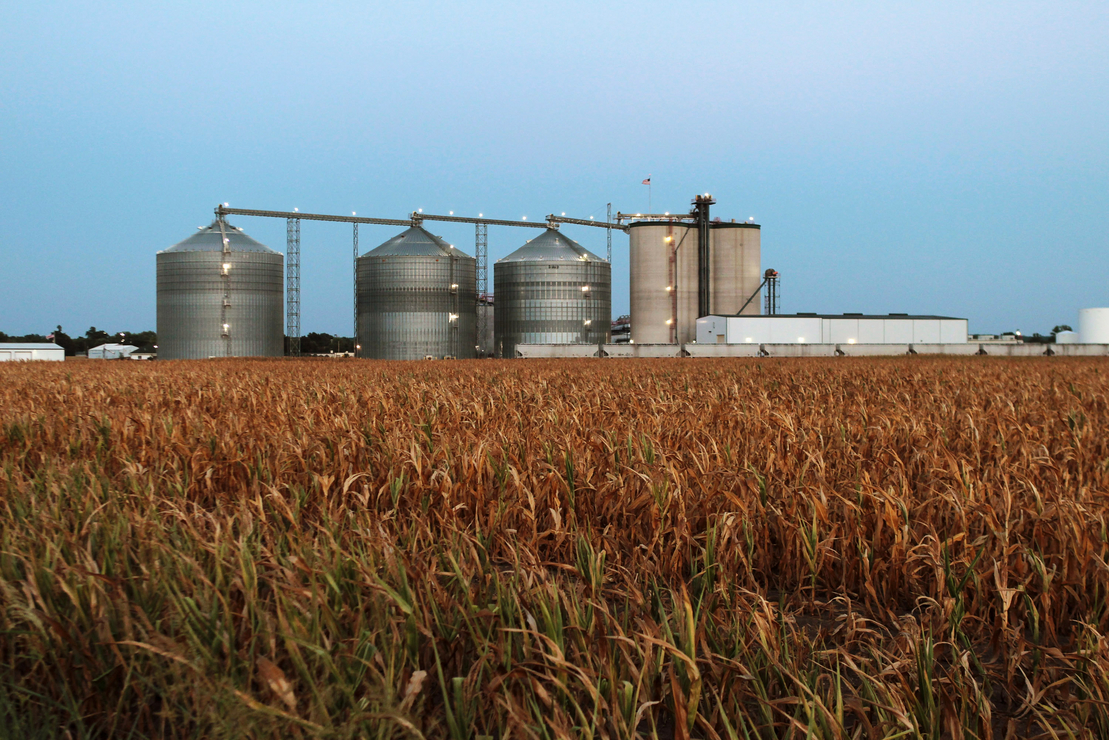 A plan to move carbon dioxide in pipelines from ethanol refineries in the Midwest is fueling a dispute among companies, landowners and environmental opponents. An Illinois ethanol plant is pictured. Scott Olson/Getty Images

State regulators across the Farm Belt are weighing approval of projects representing thousands of miles of new pipeline to move liquefied carbon dioxide from ethanol plants to sites in North Dakota and Illinois where the CO2 would be permanently stored deep underground.

Before those key decisions come, however, utility commissions and local courts are refereeing preliminary disputes between pipeline developers and opponents over access to names of landowners in the path of the three multibillion-dollar projects.

The companies — Summit Carbon Solutions LLC, Navigator CO2 and Wolf Carbon Solutions — have sought to keep lists of landowner names confidential. Environmental groups and other opponents want lists made public to help their efforts to organize.

The dispute underscores rising tension over the proposed build-out of a regional network of CO2 pipelines and the broader debate over the role of carbon capture as a climate solution and use of eminent domain authority by private companies.

With such high stakes, environmental activists and some landowners vow to keep up the fight for access to information in what they see as a David vs. Goliath battle with well-funded, politically connected developers.

“It absolutely has affected organizing efforts,” said Chase Jensen of Dakota Rural Action, a South Dakota nonprofit opposed to the two pipelines that would cut through eight counties in the state.

“Locally, people in a lot of these communities know their neighbors, so they’re checking in with each other. But when you’re talking about upwards of 450 miles [of pipeline] … connecting local pockets of people who know each other has been tough.”

In Illinois, regulators required Navigator to disclose a 73-page spreadsheet of names of landowners within a half-mile from the proposed route.

Omaha, Neb.-based Navigator said its $2 billion, 1,300-mile pipeline would gather and transport as much as 15 million metric tons of CO2 annually — the equivalent of emissions from 3.2 million cars — to a sequestration site in central Illinois.

A spokesperson for Navigator didn’t respond to an email seeking comment.

But the company’s arguments for confidential treatment of the landowner list is that privacy interests outweigh the public interests of releasing the list. The developer also said it wanted to “protect landowners from unwanted publicity and bothersome contacts” by agents, consultants and attorneys or by representatives of interest groups seeking their support, it said in a filing with the Illinois Commerce Commission.

Not everyone was swayed.

Michelle Coady Carter is among landowners on the Navigator list, which was just made public this week. The resident of rural Sangamon County, Ill., is also a general practice attorney and took the unusual step of intervening on her own behalf at the ICC after receiving notice from Navigator just ahead of a pre-hearing conference in the pipeline case.

“I had absolutely no idea that our property was within the path of this particular pipeline,” she said in an interview. “I was pretty shocked that I had not received any communication from them whatsoever.”

Carter said she’s also concerned about the safety of the pipeline.

“When I looked into it, the idea of liquid CO2 pipeline cutting across my property where I’ve got livestock and kids … it was a little bit onerous to me.”

She and others, including ICC staff and an opposition group, contended the landowners list was assembled from public information from county recorder of deeds or assessors’ offices and didn’t contain privileged or proprietary information.

And in a filing with the ICC, she called it “abhorrent” that Navigator would represent itself as a “protective gate-keeper for landowners.”

“All claims of harm to the landowners are, at this juncture, purely speculative and unsupported by the record,” the judge said.

But it wasn’t until last week that the ICC denied Navigator’s petition for interlocutory review, compelling release of the list.

In neighboring Iowa, a similar dispute over access to landowner names has been simmering for almost a year and may ultimately be decided by the state’s high court.

Ames, Iowa-based Summit, the first of three pipeline developers to seek permits from the Iowa Utilities Board, is looking to the state Supreme Court to shield its list of affected landowners from public view.

The company has so far filed for pipeline permits in four states, including Iowa, which would host 680 miles of pipeline.

Summit spokesperson Jesse Harris said the company has strong support among landowners in Iowa. Almost 1,000 landowners in the state have signed about 1,600 voluntary agreements with Summit, representing about 56 percent of needed easements.

The company’s position is straightforward, Harris said. “Landowners should be the ones to decide if their names and address their contact information is made public.”

“If the landowner wants to voluntarily offer up that our project is proposed to run through their property, and they want to talk on social media or attend meetings, they have every right to do so,” he said. “What we’re saying here is that we want the landowner to make that decision, as opposed to anyone else.”

In a 2-1 decision a year ago, the Iowa Utilities Board ruled in favor of Summit’s request to maintain confidentiality. But the company soon after sought a court injunction to block the list from being released to the Sierra Club under state open records law.

A Polk County, Iowa, district judge denied Summit’s request in August, finding that the company failed to prove information contained in the landowner list was subject to exemptions in the state open records law. The judge gave the company 14 days to file a request for an emergency stay with the Iowa Supreme Court, which Summit has done.

Jess Mazour, an organizer with the Iowa chapter of the Sierra Club, said landowners and opponents continue to be harmed the longer the legal fight drags on because the company continues to acquire necessary easements.

“One of the things we’ve been focusing on for a year now is getting access to this list,” Mazour said. “And they’re getting exactly what they want by delaying.”

The list of property owners isn’t just being used for acquiring right of way, the Sierra Club said. In a court filing, the group said Summit “abused” the list to send a letter signed by former Iowa Gov. Terry Branstad (R), a senior policy adviser to Summit, to all affected landowners. In the letter, Branstad warned that the environmental group would intimidate and lie to them and spread propaganda.

“They’re going to fight it in the courts as long as they can,” she Mazour said. “And meanwhile, they’re using that list to harass people. And it’s just — it’s creating an unfair process.”

Summit likewise said the Sierra Club isn’t being transparent about what it wants to accomplish. Harris said the group has made clear that blocking the pipeline is part of a broader strategy of ending the ethanol industry.

Even without Summit’s landowner list, Mazour said the group has been assembling a strong coalition to oppose the pipeline. But there remain rural landowners, many of them older and some without internet access, who lack information about the project.

“We find people every single day that have no idea there’s opposition,” she said. “I get, depending on the day, anywhere from two to 15 calls from new landowners that are just saying, ‘Hey, I just heard about this. Can you tell me what’s going on?’”

Some Iowans, according to Mazour, were left with bad memories from the last big pipeline project proposed in Iowa — Enbridge Inc.’s 1,172-mile Dakota Access oil pipeline from the Bakken in North Dakota to an oil terminal in Patoka, Ill.

It was from the Dakota Access permitting battles that alliances and strategy for challenging the CO2 pipeline proposals was born.

“This is part of that legal strategy, to know who each other are and organize,” Mazour said.

In South Dakota, both Summit and Navigator have filed landowner lists as confidential exhibits to their permit applications, meaning they’re not accessible to the public.

Rather than bet thousands of dollars mounting a legal fight to access to landowner lists, Dakota Rural Action used the money to hire GIS mapping specialists to “reverse engineer” the approximate pipeline routes that are provided in maps filed with the PUC.

“It’s only as good as the crappy maps they put out,” he said. “But thousands of dollars has been spent by multiple organizations to try and create our own maps.”

Like organizers in other states, Jensen said he regularly finds landowners who have no idea they’re in the path of the pipeline.

“We hear from people all the time who are saying, ‘Hey, I didn’t even realize I was on the map. And now there’s flags out in my front yard where they’re surveying.”