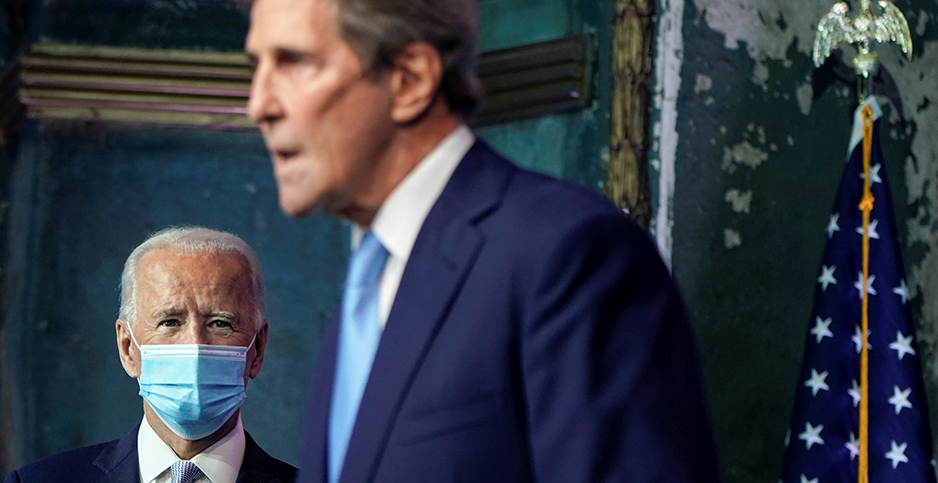 President-elect Joe Biden ran on a pledge to green America’s economy, but first he will need to navigate an emissions spike.

The U.S. Energy Information Administration expects energy-related carbon dioxide emissions to plunge 10% this year as the coronavirus lays waste to the U.S. economy. But the federal energy forecaster thinks emissions will climb 6% next year as the economy rumbles back to life.

How Biden manages the rebound will play a critical role in setting America’s emissions trajectory, analysts say. While cost declines in renewables and electric vehicles are expected to spur emissions reductions in the coming years, the United States likely will need strong federal policy to meet Paris Agreement climate targets or more ambitious plans to achieve net-zero emissions, they say.

"We’re hoping to see the economy and people recover in 2021, and that will inevitably lead to emissions rebounding," said Robbie Orvis, director of energy policy design at Energy Innovation, a clean energy think tank. "The real question is whether Biden can use the recovery and need for new job creation to spur the policies we need anyway to bring emissions down in the long run."

Biden has been here before. In 2009, the year the Delaware Democrat was sworn in as vice president, U.S. energy-related CO2 emissions fell 7% as the Great Recession rattled the economy. Emissions bounced back 4% in 2010, according to EIA data.

But there are key differences between then and now.

In 2009, the Obama administration steered $90 billion of clean energy investments into the economy with the help of Democratic majorities in the House and Senate. Those investments set the stage for the growth in renewables and gradual reductions in U.S. emissions over the next decade. America’s energy-related emissions fell 8% between 2010 and 2019.

Whether Biden can repeat the trick is unclear. Clean energy was left out of coronavirus aid packages passed so far by Congress. Public transit agencies, which received an initial infusion of $25 billion, are running out of money as ridership plunges. And congressional Republicans, who are favored to retain control of a closely divided Senate, have shown little appetite for striking a deal that would direct money toward greening the economy.

"Can he impact emissions in the short term? My sense is probably not. Those are all structural in nature," said Richard Barnes, North America regional president for DNV GL, an energy consultancy. "But clearly, government policy is critical for enabling the energy transition to a lower-emissions society."

Federal investment and policy that supports the build-out and modernization of America’s power grid to accommodate the electrification of transportation and other sectors will be particularly important, he said.

"I suspect we’ll make some moves in the right direction — the economics are working in the favor of a clean energy transition — but there is probably a whole lot that could get done that won’t get done," Barnes said.

Transportation is largely responsible for the decline in U.S. CO2 output, accounting for three-quarters of the reductions recorded through October, according to Carbon Monitor, a real-time emissions tracker established this year by an international team of climate scientists.

EIA thinks vehicle miles traveled will increase 9% next year, helping produce an increase in petroleum emissions of similar magnitude. A wild card in next year’s rebound is coal.

In EIA’s projections, gas prices will rise as a result of rising demand for liquefied natural gas and reduced gas output from oil wells. That would spur a large rebound in coal generation, which EIA thinks will increase from 20% of U.S. electricity production this year to 25% next year.

Many analysts are skeptical that coal will enjoy such a healthy rebound. Gas futures for 2021 are trading below EIA’s projected gas price, said Noah Kaufman, a climate economist at Columbia University’s Center on Global Energy Policy.

Still, he cautioned against reading too much into the annual numbers, however they turn out.

"My own view is we spend way too much time worrying about year-to-year fluctuations that occur due to market trends or global pandemics, and we should be far more worried about the long-term trends," Kaufman said.

Indeed, annual fluctuations in emissions, particularly those from one country, do little to change the world’s overall climate picture. Global emissions through October were down by 5%, or 1,550 metric tons, compared with last year, according to Carbon Monitor. That would amount to the largest-ever annual decline in emissions.

But because carbon dioxide is a long-lived gas, taking at least a century to break down, concentrations of CO2 in the atmosphere have continued to climb this year. The rate of CO2 buildup likely will slow this year but remains "within normal year-to-year fluctuations," the World Meteorological Organization reported recently.

For policymakers like Biden to bend the curve, countries will need to make sustained long-term reductions, analysts say.

America is within striking range of its past Paris target, they note. If EIA’s emissions projections are right, U.S. energy emissions would be 18% below 2005 levels in 2021.

The United States would need annual emissions reductions of 2% in that instance to meet its Paris target, a 26% to 28% reduction from 2005 levels by 2025. That would be double the average 1% annual reductions recorded between 2005 and 2019.

President Trump withdrew the United States from the landmark climate agreement, but Biden has vowed to reenter the deal when he takes office.

Biden’s power to permit renewable energy projects on federal land and his ability to wield existing regulatory power to clean up everything from cars to power plants — combined with market trends — could be enough to reach the Paris threshold, analysts say.

Reaching net-zero U.S. emissions by midcentury — which Biden wants — is another story.

The Intergovernmental Panel on Climate Change has said the world needs annual reductions of 7.6% this decade to hold global temperature rise to 1.5 degrees Celsius by century’s end.

"Here is the thing about next year. It is not enough to join the Paris Agreement, which we will. We have to rejoin with an enhanced commitment to reduce emissions," said Rachel Cleetus, policy director for the Union of Concerned Scientists’ climate and energy program.

"The math is sobering," she added. "My hope is that we now have an administration that will center science in its response to this crisis, that we have a Congress that will take it seriously and recognize we’ve waited much too long, and it’s time to act, and act robustly."