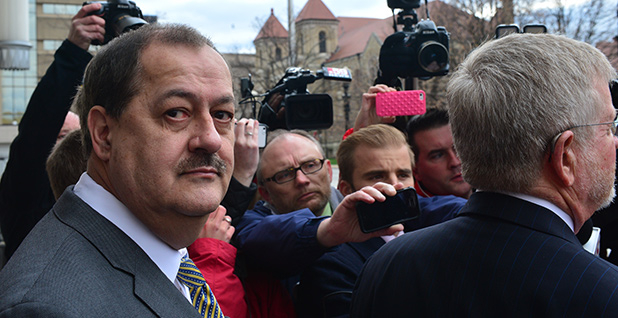 Don Blankenship entered a crowded Senate race yesterday. The former coal executive is seen here leaving the federal courthouse in Charleston, W.Va., in 2015 after being convicted of a misdemeanor related to a deadly mining accident. Tim Hindman/Charleston Gazette/Associated Press

Pugilistic ex-coal boss Don Blankenship wants to burn more coal to save the Earth from cooling, thinks some climate scientists should get straitjackets and insists that environmentalists are hurting the environment.

All that might help his odds of winning a Senate seat in West Virginia, where candidates are jockeying to have the most pro-coal policies.

Blankenship rocked the political world yesterday when he filed paperwork to run in the race to unseat West Virginia Democratic Sen. Joe Manchin next fall. He plans to begin running TV and Facebook ads hitting Manchin today. The former CEO of coal giant Massey Energy Co. is fresh out of federal prison after serving a one-year sentence for violating safety regulations — including at the Upper Big Branch mine, where 29 workers were killed in a 2010 explosion.

How serious Blankenship is, and whether he can actually prevail in the May 8 Republican primary, which includes state Attorney General Patrick Morrissey and Rep. Evan Jenkins, are open questions.

"It’s pretty safe to say this is going to be an unconventional campaign," said Greg Thomas, a West Virginia-based Republican consultant who is working for Blankenship.

The 67-year-old former coal executive has been making rumblings for some time about entering the race, where the Republican primary was already hotly contested.

Perhaps more than in any other election next year, federal energy and climate policies will factor into the West Virginia Senate contest. Morrisey led a multi-state legal assault against the Obama administration’s signature climate change rule, the Clean Power Plan, and Jenkins teamed up with other lawmakers to sue over that regulation.

Just this week, Morrisey was prominent at a U.S. EPA public hearing in Charleston, W.Va., on the Trump administration’s proposal to scrap the Clean Power Plan (Climatewire, Nov. 29). Jenkins’ legislation to prevent the social cost of carbon from being considered in federal regulatory cost-benefit analyses is being marked up today in the House Natural Resources Committee.

Even Democrat Manchin has called the Clean Power Plan "an assault on our state’s economy and our way of life." And in his 2010 Senate campaign, Manchin famously appeared in a television ad that showed him shooting a copy of the climate bill being considered at the time by the Senate. "I’ll take dead aim at the cap-and-trade bill, because it’s bad for West Virginia," he said.

With the addition of Blankenship, the pool is getting another strong critic of federal efforts to curb emissions.

Candidates are "stumbling over their feet" to portray themselves as the leading opponents of the so-called war on coal, said former Rep. Nick Rahall, a Democrat whose 19-term congressional career was ended by Jenkins in 2014.

"It’s a constant drumbeat, as much as it was during Barack Obama’s tenure, about the war on coal and trying to blame President Obama for everything that’s befallen the coal industry over the last couple of decades, little of which he had control over and little of which Donald Trump has control over," Rahall said yesterday in an interview.

‘We must demand that more coal be burned’

Blankenship has been vocal about his views on climate change. He thinks it’s a "hoax" and he’s a self-described "global warming denier."

In 2009, he wrote on Twitter, "Some fear we are entering a new Ice Age. We must demand that more coal be burned to save the Earth from Global Cooling."

He told E&E News in an interview later that year, "I really believe that the climate is changing naturally and that the temperature for the last eight or nine years has been cooling and that the Arctic ice has been increasing and that there’s a great deal of misunderstanding out there about climate change."

And he told The New York Times in 2010: "Anybody that tells you they know what the temperature is going to be in 100 years, you should put a straitjacket on ’em; they don’t have any idea. It’s almost humorous to think that a country that can’t predict its budget deficit next year can predict the temperature of the Earth, I mean, it’s — the problem with the world’s climate is it’s impacted by lots of things; we all know that."

When it comes to climate change, "These candidates are all sort of in the same place: less regulation, anything to help the coal industry is good for them," said Jennifer Duffy, a senior editor at The Cook Political Report.

But Blankenship is no regular candidate, she said. "You can’t even get there until you deal with the who of Don Blankenship." She noted that he’s been running ads ahead of his campaign launch, attacking Manchin for his handling of the mine explosion. "It’s all about the issues that landed him in jail," Duffy said. "I’m not really sure what kind of campaign he’s going to be running."

A campaign about redemption

Some political observers speculate that Blankenship’s primary motivation for getting into the race is to clear his name and get revenge against Manchin, who said that Blankenship had "blood on his hands" after the mining disaster.

"I think a lot of this he views as his own sort of personal redemption, political redemption," said Mike Plante, a West Virginia Democratic political strategist.

West Virginia Democratic Chairwoman Belinda Biafore suggested in a statement yesterday that national Republican leaders are using Blankenship to bloody Manchin ahead of the general election, regardless of who the GOP nominee is.

"It looks like Mitch McConnell recruited Don Blankenship to use his dirty money to attack Joe Manchin and distract from the nasty Republican primary," Biafore said. "It’s shocking that even Don Blankenship would accept a backroom deal like this from McConnell."

It’s unclear how much support Blankenship has within the state.

Plante said he did some polling of Blankenship last year, and "he was not very popular." The ex-coal boss has spent money on behalf of candidates in the past, "and there are still some folks that think he does no wrong," Plante said. But "there’s been a lot of negative information about him that came out in that trial," he said.

Rahall recalled standing near Blankenship at a media appearance after the Upper Big Branch disaster in 2010, when family members of miners were waiting for news about those who were missing. "I had to dodge the chairs that were being thrown from family members at Blankenship when he tried to take the mic," Rahall said.

Phil Smith, a spokesman for the United Mine Workers of America, said in a statement: "We have every confidence the people of West Virginia will see through [Blankenship’s] pathetic attempts to blame others for his actions. They will render the same judgement on the criminal Don Blankenship that a West Virginia jury did: guilty as charged, and unworthy of holding any office."

But winning office may not be Blankenship’s ultimate aim. He may just want to influence the outcome of the election.

Sources said that while Blankenship loathes Manchin, he is also no fan of Jenkins — and in the primary, he may cut into some of Jenkins’ base in the 3rd District, prime West Virginia coal country.

West Virginia environmental lawyer Bill DePaulo said of his candidacy, "It’s a joke. He is a joke."

Given the drama surrounding Blankenship, his entry into the race has "a lot of people interested to see what fireworks ensue," Plante said.

Thomas, the Republican consultant working with Blankenship, conceded that he doesn’t know if the candidate will do any retail campaigning or appear at public forums, or whether he will limit his messaging to the airwaves.

Observers say it’s not yet clear how Blankenship’s entry into the race will affect the Republican field or the general election.

"It seems to be a wide-open race, I’ll say that much," said Bill Raney, president of the West Virginia Coal Association. He added that the Blankenship candidacy was too new to comment further on, and said he wasn’t sure yet whether the association’s political action committee would back a candidate in the Senate race.

Blankenship is hardly the first coal industry executive to run for office in West Virginia. Jim Justice, an entrepreneur with major coal holdings, was elected governor last year as a Democrat — though he announced this summer that he was switching parties at a rally with President Trump.

And Blankenship is hardly the first ex-con to seek political office. After being convicted on corruption charges and being expelled from the House in 2002, former Rep. James Traficant (D-Ohio) ran for his seat again, as an independent, while serving his prison sentence. Eugene Debs, the Socialist Party leader, ran for president from jail in 1920. Lyndon LaRouche, the controversial and frequent White House contender, also ran from jail, in 2002.

Ex-Rep. Michael Grimm (R-N.Y.), who pleaded guilty in 2014 to felony tax fraud, is seeking his old seat this cycle, at the urging of Steve Bannon, Trump’s former political adviser.

Morrisey wrote on Twitter yesterday, "Everyone has a right to run for public office. I welcome anyone into this contest, but I will continue to run on my positive record of obtaining conservative results for coal miners and West Virginia taxpayers … fighting for the unborn, protecting gun rights, and ridding the state of this terrible opioid epidemic."

Blankenship certainly has the personal wealth to change the dynamics of the race.

"The biggest X factor here is how much money can Blankenship spend on this race," said Duffy of The Cook Political Report. "If he just aims at Manchin, I don’t see how he wins a primary, and if he’s a single-issue candidate, if it’s all about his own conviction, I don’t consider him a serious candidate."

If there are GOP primary debates, Plante said, it will be interesting to see "how they handle Don Blankenship on the issue of coal."

But not everybody is taking his candidacy seriously.

Asked about Blankenship’s entry into the Senate race, Rahall laughed. "I’m sorry, was that me laughing?" he said.