Coal is gone, or almost, in areas that made Trump president 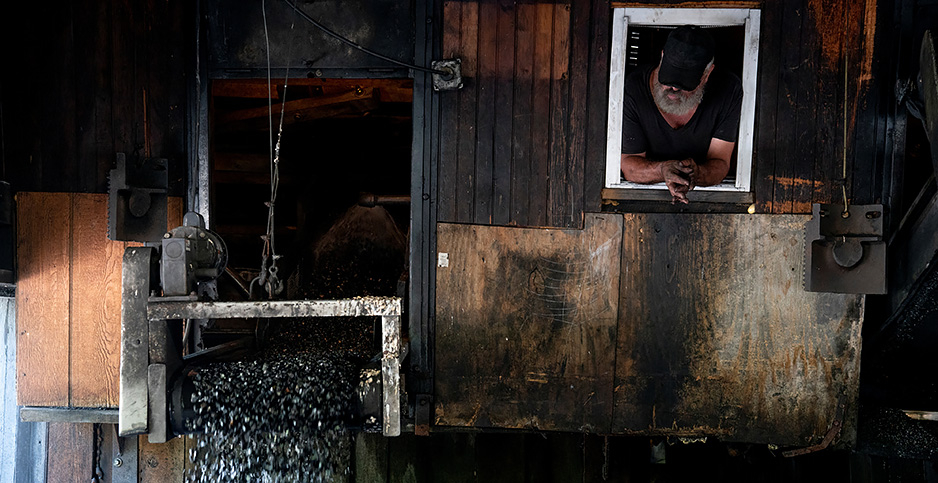 A worker watches as coal is loaded into a truck in Pennsylvania in July. The state could decide whether President Trump serves a second term. Dane Rhys/Reuters/Newscom

Bruce Mansfield was a coal-burning behemoth. The last year the Pennsylvania power plant operated near full capacity, in 2014, it consumed 796 tons of coal every hour and generated enough electricity for roughly 1.5 million homes.

But when the mighty plant closed last year, something unexpected happened: Hardly anyone in the area noticed. Their attention had already turned to the new employer in Beaver County.

Royal Dutch Shell PLC announced plans in 2016 to build a $6 billion ethane cracker in Bruce Mansfield’s backyard, injecting 6,000 construction jobs and 600 permanent positions into the rusting steel community on the banks of the Ohio River. In the resulting economic frenzy, the loss of some 250 jobs at the Bruce Mansfield power plant was almost an afterthought.

"From 2016 on, it’s been all Shell fever," said Jared Stonesifer, a former business reporter at the Beaver County Times who covered the plant’s shutdown. "It’s sorry to say, but Bruce Mansfield was put a bit on the back burner there."

The extent to which other coal communities are as ready to move on could help determine if President Trump can fend off a reelection challenge from former Vice President Joe Biden, the Democratic nominee. The president’s pledge to save coal helped him win a series of crucial victories across the Rust Belt in 2016 (Climatewire, Dec. 13, 2016).

In Ohio, Michigan, Pennsylvania and Wisconsin, Trump racked up large vote totals in areas where coal plants had closed, pushing the former reality TV star over the top in his race against Hillary Clinton and delivering him the presidency.

Mining output in 2019 fell to its lowest level since 1978. Meanwhile, energy consumption from renewable sources outpaced coal for the first time since 1885, when wood accounted for the majority of U.S. energy consumption.

"Trump has done everything possible to remove protections on the environment, and as a result, we have seen more plants closed than in the prior four years," said Patrick Dillon, national executive vice president of the Utility Workers Union of America. "It is not based on policy. It is based on money."

Coal’s decline can be traced back to places like Beaver County. A deluge of cheap natural gas, along with rapid price declines for renewables, has eroded the profitability of coal plants and prompted many utilities to ditch the former workhorses of America’s power grid.

The flood of cheap gas from the Marcellus Shale formation underlying parts of Pennsylvania, Ohio and West Virginia has led to a wave of new gas plants in the Rust Belt. It has also given rise to other projects, like Shell’s ethane cracker plant that will turn gas into plastic products.

The indefatigable supply of gas felled coal giants like Bruce Mansfield, which struggled to return to full operation after a fire burned through a scrubber in 2018. The plant’s output had already been falling by then, but its death is nonetheless notable. With a listed capacity of 2.5 gigawatts, Bruce Mansfield is the largest U.S. coal plant to close since 2013.

"People in Beaver County just sort of discarded that closure and fully embraced natural gas and the presence of petrochemicals here," said Jack Manning, a Republican county commissioner who worked for nearly four decades in the petrochemical industry.

Beaver County was crucial to Trump’s victory in Pennsylvania four years ago. The steel mills along the Ohio River were once the engine of the local economy, their heavily unionized workforce a large pot of votes for Democratic candidates. But the area has drifted away from Democrats in recent decades.

In 2008, Obama lost Beaver County to Sen. John McCain (R-Ariz.) by just 2,600 votes in an electorate of 82,000 people. Obama easily overcame his loss in Beaver County by scoring big victories in Pittsburgh and Philadelphia.

Eight years later, Trump rolled over Clinton in Beaver County, winning the area by more than 15,600 votes. The president won Pennsylvania by a little more than 44,000 votes.

Manning said he expects a tighter race in Beaver County this year, though he guessed Trump will still carry the county.

"The big difference now is while Joe Biden is not the strongest candidate in the world, he is well known and respected in Beaver County as a friend of the unions," he said. Four years ago, Manning added, "there wasn’t the same level of respect."

That assessment was echoed by union members and local officials across the region. In northwest Indiana, a traditionally blue speck in a reliably red state, Northern Indiana Public Service Co. is pursuing one of the most ambitious plans in America to green its power supply.

The utility closed its Bailly Generating Station, a coal plant along the shores of Lake Michigan, in 2018. It will shut its two remaining coal plants down in 2023 and 2028.

Vernon Beck, president of United Steelworkers Local 12775, has guided the utility’s union members through the shutdown. Layoffs were avoided after Bailly closed when the company and the union arranged a combination of retirements and transfers to other plants, Beck said.

The job figures to get more difficult when the utility closes its other two plants — Schahfer and Michigan City. Beck said he is nevertheless optimistic that the union will be able to find work for its members in other parts of the Indiana utility’s operations, perhaps servicing electric and natural gas lines.

"I think they’ve come to the realization they’re going away," Beck said of his members’ view of coal plants. "I don’t hear as much complaining about it anymore."

He guessed that at least a third of his membership will vote for Trump even though the union’s leadership has put its support behind Biden.

"We have all kinds of people running around with Trump flags flying out the back of their pickups," Beck said.

‘Writing on the wall’

In Michigan, union leaders struggled to convince power plant workers to vote for Clinton in 2016, said Dillon, who was president of the Michigan State Utility Workers Council at the time.

The election coincided with a wave of coal plant closures in Michigan. Nearly 1.4 GW of coal capacity, or about 15% of the state’s total at the time, flipped offline in 2016.

The electoral consequences were devastating for Clinton in places like Bay County, where the J.C. Weadock plant closed that year. Obama carried the county four years earlier by 3,000 votes, but Trump beat Clinton there by 6,700 votes. Trump carried Michigan by roughly 10,000 votes altogether.

Plant closures in Michigan have slowed over the last four years. Only 730 megawatts has been retired since 2017. But the state’s utilities are planning to close almost 4 GW, or about half of Michigan’s total coal capacity, in the next decade.

Closures will occur at DTE Energy’s St. Clair, River Rouge and Trenton Channel plants in the next two years.

Dillon is feeling more optimistic this year, in part because he said union members understand the wider challenges facing coal.

"As a member in that part of the industry, you’re talking about your livelihood, talking about how to support your family, but you understand what’s going on," he said. "A lot of them understand the writing on the wall."

Of course, coal is just one issue in a year dominated by the coronavirus and concerns over growing racial divisions in the country. How power plant towns feel about those issues will be as important to how residents vote as energy policy, observers said.

Greg Adams, who leads Utility Workers Union of America Local 175 in Dayton, Ohio, said much of his members’ support for Trump stems from the president’s backing of gun rights, and other conservative issues. He predicted that most will vote for Trump this year.

Coal is nevertheless an important issue for Local 175. A week after the 2016 election, Dayton Power & Light Co. announced it would close its J.M. Stuart and Killen stations, two massive coal plants in the southern part of the state.

A study conducted by Ohio University estimated that the closures led to the loss of 1,100 jobs when broader economic impacts were factored in. Adams County, the rural community that was home to both power stations, reported a 32% drop in tax revenue.

The closures are part of a wider trend in the Buckeye State. About 5.2 GW of coal capacity has been shut down in Ohio since 2017, the most in the nation over that time.

Most Local 175 members understand coal’s current predicament, Adams said. That does not mean they support the president any less.

"I’m not going to sway anyone who is pro-Trump," he said. "I might sway some of the ones who are younger and not as locked in. I’m not winning that battle, so it is not worth starting the war."

Back in Beaver County, Pa., Trump has sought to claim credit for Shell’s ethane cracker. The president visited the site earlier this year and dispatched his Energy secretary, Dan Brouillette, for a visit last month. And Trump has repeatedly attacked Biden’s position on fracking, saying the former vice president would ban the practice. Biden has said he would end fracking on federal land.

The distinction may not matter.

Locals are more likely to credit former Gov. Tom Corbett (R) and the state Legislature for the Shell project than Trump, Manning said. The oil and gas giant announced the cracker plant in early 2016 and said last week that it is 70% complete.

"The problem is, he came at the tenth hour," Manning said. "Very few people who are honest will give Trump any credit on this at all. They know bringing back coal and bringing back steel, they know the realities that they are not coming back to the levels he was boasting."