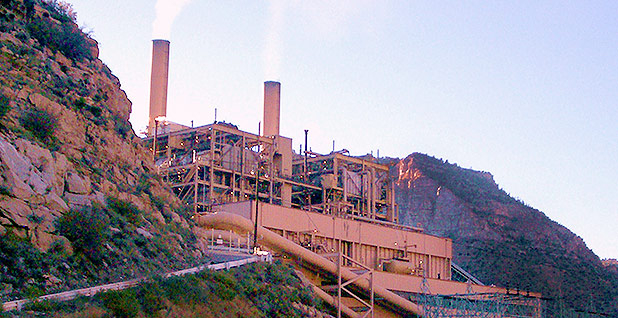 The Castle Gate coal-fired power plant near Helper, Utah. Could new coal plants be underway in the United States? The industry hopes so. Photo by Staplegunther, courtesy of Wikipedia.

The coal lobby is in the market to build a new plant, a prospect that would have been unthinkable just months ago.

Emboldened by President Trump’s efforts to roll back climate regulations on fossil fuels, the American Coalition for Clean Coal Electricity (ACCCE) says it is in talks with an unnamed state’s governor and lawmakers about providing incentives for a power company to plan a new coal-fired facility.

"I don’t think any of this is going to happen overnight," said Paul Bailey, ACCCE’s president and CEO. "There are a lot of discussions and steps to go through to build a new coal plant."

Bailey said his group is "optimistic" about preserving the existing coal fleet but is also encouraging several states to consider new coal plants. ACCCE is also hammering out federal policy proposals that could support coal.

ACCCE’s push comes as existing coal plants are struggling to compete against abundant natural gas and increasingly cheap renewable power. Plants started shutting down before the Obama administration proposed greenhouse gas cuts. Even though Trump will not implement regulations like the Clean Power Plan, a new coal plant is meant to last for about 40 years and could run up against climate rules from a future administration.

That’s why building a new plant would be a steep uphill battle, according to analysts who study power markets.

"It’s a pretty tough sell," said Philip Smyth, senior director in Fitch Ratings’ utilities group. "Utilities are looking for ways to save plants they already have in the ground, never mind building new ones."

Still, under Trump, ACCCE sees a window to tout the benefits of coal in helping to maintain fuel diversity and grid reliability as other power sources gain market share.

Trump’s actions may have minor impacts on the direction of the power sector, keeping some coal plants from closing as quickly. But they are likely to exacerbate a long-standing political and technical debate over how much coal-fired power the grid needs to function smoothly.

As Bailey sees it, renewable use is encouraged by state standards and federal tax policies. Nuclear generators are asking for and receiving incentives in states where they face closure.

Why shouldn’t a high-efficiency coal plant that could some day employ carbon capture get a boost from state policy? he asks.

"I would see it as leveling the playing field," he said.

"Bring it on," Nilles said. "We’re trying to solve the problem of climate change, and it would be a red-hot poker in the eye. Not only is it trying to slow down progress, it would actually reverse our progress."

A new coal plant might appeal to a state with remaining coal resources. But most coal states are sparsely populated and don’t need much power.

Wyoming, for example, exports most of its electricity to more progressive states that don’t want to run on coal. Rocky Mountain Power in Wyoming last week announced it will invest in 1,100 megawatts of new wind power.

One of the country’s newest coal plants, which came online in Texas a few years ago, had lost half its value by 2016, according to tax disputes.

Another, planned by a cooperative in Kansas, has been stuck in court for years and now may not be economical to build.

In Arizona, policymakers have asked Trump for help keeping the Navajo Generating Station running. The plant’s operator has said it would lose $100 million to $150 million annually to keep the plant open beyond 2019 (Climatewire, April 10). That’s just to keep a plant running. Getting a new plant online against market odds could cost more, Nilles said.

"Any subsidized coal plant would displace other generation," Nilles said. "If they try to do this in any states like Ohio, they’re up against all the other competitors in the marketplace."

States like Kentucky and West Virginia rely mainly on coal, but they’re already seeing plant closures. That’s true around the country, including with a recent announcement in Boulder, Colo.

A regional grid with no coal?

Bailey maintains that coal offers services to the grid that other fuels can’t provide. As a traditional baseload fuel, coal can run all day, every day, although it can’t start and stop quickly to meet varying demand. Coal plants can keep a few weeks’ worth of fuel on hand, while natural gas must arrive via pipeline.

Solar and wind, which are carbon-free but work only when the sun is shining or the wind is blowing, go well with gas. While advances in battery storage for renewable power aren’t fully developed yet, new techniques and technologies are making it possible for them to run at higher levels.

Overall, "gas can plug that need to manage the grid as well as coal," and can do it more cheaply, Smyth said.

Grid organizations like the PJM Interconnection in the Mid-Atlantic and Midwest take all of these things into consideration when they study impacts on electricity delivery.

To explore these issues, PJM recently released its first fuel mix report, which showed that the regional grid could operate reliably without coal, using up to 86 percent natural gas or up to 20 percent solar power, under different scenarios.

ACCCE thinks some may be misinterpreting the PJM report to support a huge expansion of natural gas use. The group yesterday sent comments and questions to PJM, which will hold an event to review the report on April 19.

PJM still plans to look at grid resilience, which could consider some of coal’s other values.

For example, a compressor station failure on a gas pipeline could cause power shortages if the grid is too reliant on natural gas. The Fukushima nuclear disaster in Japan changed how multiple countries use nuclear power.

There are also cost considerations, which PJM is not studying. Natural gas is widely expected to remain cheap but could become expensive under some unforeseen circumstances.

An event by the conservative Federalist Society next week will explore how nuclear, coal and combined-cycle gas "have become unprofitable in the face of tax-favored renewable energy and low cost natural gas."