Coal may get a lifeline in Democrats’ reconciliation bill 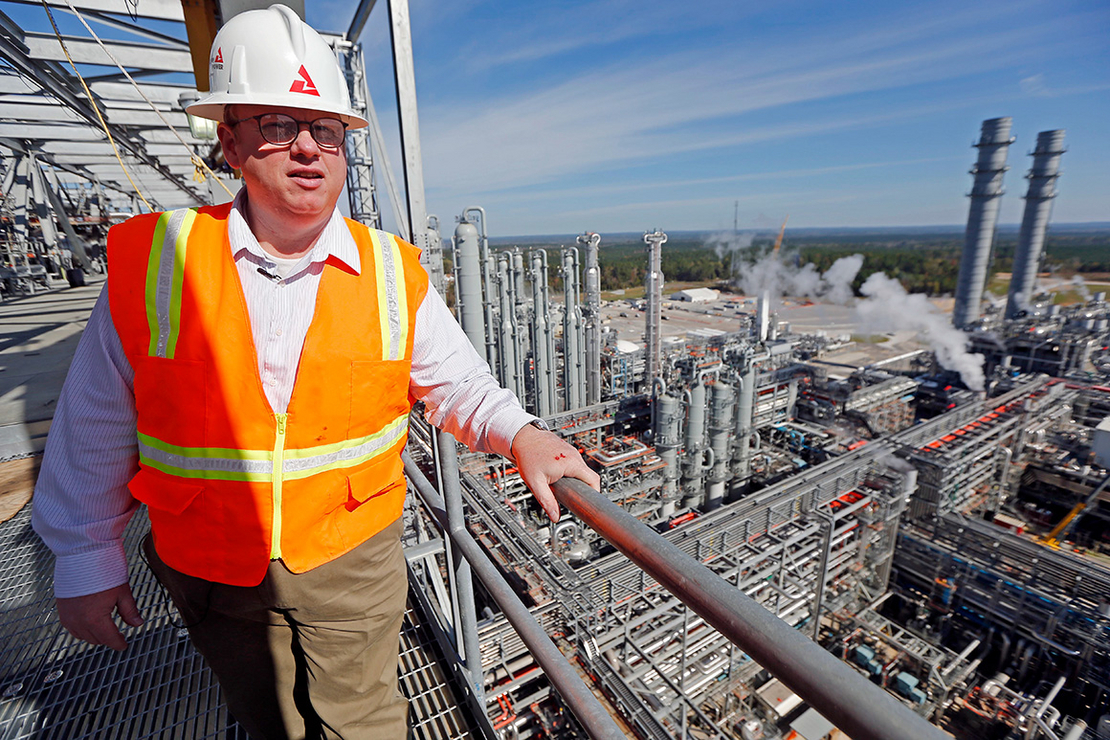 Mississippi Power spokesman Lee Youngblood talks about the carbon capture power plant in De Kalb, Miss., while standing on the top floor of the gasifier unit, some 218 feet above the pine forests and pastures. AP Photo/Rogelio V. Solis

Aging coal-fired power plants desperate for a lifeline may find one in the unlikeliest of places: the Democrats’ climate-centric $3.5 trillion budget reconciliation bill.

The measure uses funding and tax breaks to ensure daily American life is predominantly powered by the sun and wind, not fossil fuels.

And it aims to make that happen in a decade.

To go that fast, however, some observers say, it’s likely to keep some existing gas-fired, and possibly even coal-fired, power plants online.

Democrats are pushing the reconciliation bill with urgency because of that timeline, which scientists say is necessary to avoid the worst effects of climate change. It would require a rapid, unprecedented transition of the electrical grid.

Tucked into the bill is the Clean Electricity Performance Plan, the heart of President Biden’s climate strategy to decarbonize the grid by 80 percent in the next nine years. The plan would provide funding for utilities to rapidly build out clean energy resources on the grid and penalize those who go too slow.

The hardest part of the transformation is going to be the final 20 or even 30 percent needed to get to a zero-carbon grid. It’s that last tricky step where power plants that burn fossil fuels — albeit with modern carbon capture and sequestration (CCS) equipment — are needed.

“It would be one of the few policies out there that would result in the deployment of CCS on coal,” said Lindsey Walter, deputy director for Third Way’s Climate and Energy Program.

Under the CEPP, which is technology neutral, funding for carbon capture projects would become available, Walter said. It could be used in conjunction with a more robust version of the 45Q tax credit — so named for the section of the IRS code in which it appears — for carbon sequestration.

That would give a boost to coal- and gas-fired power plants that they wouldn’t get on the open market, she said. At a 70 to 80 percent build-out, renewable resources become more expensive and require a network of costly transmission lines that don’t exist and would take many years to plan and build.

Renewable resources are the “workhorses” of the power grid transformation that will take shape in the next few years, said Sasha Mackler, director of the Bipartisan Policy Center’s Energy. But the success and speed of that shift will require a backstop or reliable power as well, he said.

To ensure the grid is reliable, the value of retrofitted coal- and gas-fired power plants becomes much higher in the challenging end stages of the build-out, especially for harder-to-decarbonize sectors such as manufacturing.

“As you go deeper and deeper, there will be a need for low-carbon, zero-carbon resources that can provide that system backup that wind and solar don’t provide on the grid,” he said, adding “there is a fundamental need for generation that is available when you need it when there might be bad weather or a colder season.”

Carbon capture is one part of a suite of baseload power options that also includes hydro, nuclear and geothermal energy. Mackler and other specialists also noted that the technology is still evolving and expect that it will become cheaper and more efficient to deploy by the end of the decade as well.

Plus, they said, the more that is built, the more robust the market becomes.

Currently, the House version of the CEPP only includes natural gas with carbon capture and storage. And that’s where Sen. Joe Machin (D-W.Va.) comes in.

As chair of the Senate Energy and Natural Resources Committee and one of the few moderates currently withholding support for the bill, Manchin will have undue influence over the fate of the CEPP. If he advances the measure in the Senate, which is still uncertain, observers widely expect that he’ll insert a provision that would support coal.

“For someone whose biggest priority is keeping coal plants open, this offers a longer-term lifeline than just the status quo,” said a source close to the negotiations, speaking on background to talk frankly about closed-door talks.

‘Win for both sides’?

Manchin hails from a state that receives more than 90 percent of its power from coal. The coal industry, along with the natural gas industry, supports tens of thousands of jobs in West Virginia. And Manchin himself owns a company that profits from the coal industry by selling waste coal to an aging power plant.

He has repeatedly expressed skepticism about the transition away from a grid largely powered by fossil fuels.

In July, Manchin wrote a memo to Senate Majority Leader Chuck Schumer (D-N.Y.) this summer, aiming to cut the package to $1.5 trillion and seeking more natural gas, coal and carbon capture in clean energy tax policies. In the memo, he said he wants coal and natural gas coupled with carbon capture to “feasibly qualify” for clean energy incentives.

Nonetheless, Manchin has shown signs of softening his hard-line position in recent days, and progressives have signaled that they are willing to compromise on a smaller package. He met with Biden at the White House again on Wednesday, a day after the president said “it sure seems like he is moving.”

Passing the reconciliation bill, and especially the CEPP, will give moderates and progressives something to take home to their constituents during next year’s campaign, Third Way’s Walter said. It also comes at the moment Biden needs to show the U.S. can pass aggressive climate policy to world leaders at the COP26 international climate talks in Scotland that begin in a few weeks.

“It is a win for both sides, we need to get our emissions goals, especially going into COP,” Walter said. “We would benefit from coming in and giving Biden a position of strength in negotiations in having those existing policies in place that actually get us to our emissions reductions goals. Simultaneously, we understand the need for innovative clean energy technologies, like carbon capture, that Joe Manchin cares about, and this would create the demand for them.”