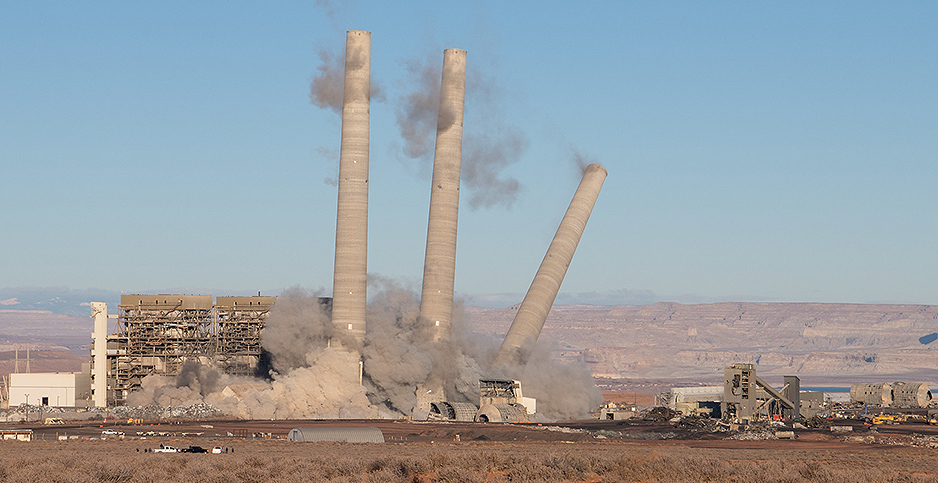 Coal plant retirements are likely to slump to their lowest level since 2014 in President Biden’s first year in office, according to federal data.

The U.S. Energy Information Administration projects more than 4 gigawatts of coal retirements this year, down from 9.4 GW in 2020. Some 22 GW is slated for shutdown through 2024, compared with 41 GW during the Trump administration. The U.S. coal fleet total is roughly 220 GW.

The slowdown may be an anomaly. Many analysts expect coal to resume its long-term decline after a brief rebound this year.

But the dynamic hints at a potential risk to Biden’s climate ambitions.

Yet those same forces are unlikely to be strong enough to deliver the level of emissions reductions Biden is seeking. The president is aiming to eliminate power plant emissions by 2035.

"If you want to get 50% below 2005 by 2030, you have to squeeze out all the coal," said Robbie Orvis, director of energy policy design at Energy Innovation, referring to the emissions reduction target many climate hawks think is needed.

Most modeling shows a significant amount of coal in 2030 even with the adoption of a clean electricity standard, he said.

"Increasingly, there is going to have to be some sort of mechanism to squeeze out those last plants, because it gets harder based on those market forces alone," he said.

Coal is set for a bounce-back year in 2021 after a dismal 2020. Rising electricity demand associated with an improving economy and an uptick in natural gas prices are likely to push coal generation higher.

Many analysts still expect coal retirements to exceed EIA’s current projections, which are based on announced retirements. Gas prices are expected to remain flat in coming years, while competition from renewables will be stiff.

The growing influx of wind and solar, which boast no fuel cost, is likely to put downward pressure on wholesale electric prices. It is also likely to force coal plants to cycle their generation up and down to match renewable output, a process that can strain coal boilers.

And even if the Biden administration’s climate agenda falters, utilities are likely to face increased pressure from environmentally conscious investors to shut their remaining coal plants.

"There is little reason to think you wouldn’t see coal retirements continue as those factors combine," said Gregory Marmon, an analyst who tracks the industry at Wood Mackenzie.

Still, Biden faces a challenging path to achieving his pledge of eliminating power plant greenhouse gas emissions by 2035. The Rhodium Group, an economic consulting firm, anticipates that roughly half of the U.S. coal fleet will remain in operation in 2030 absent any policy changes.

The last U.S. coal plants will be the most difficult to close because they are likely the most efficient. Vertically integrated utilities, which operate as regulated monopolies and recover their costs from customers, may also be insulated from some of the market pressures to close coal facilities, analysts said.

Falling coal use has been the primary engine of falling carbon dioxide output in America.

Power-sector emissions are down 40% since 2005, helping drive a 20% reduction in total U.S. greenhouse gas emissions. But the United States is likely to give some of those reductions back this year. EIA thinks energy-related emissions will rise 11% on the back of increased oil demand and higher output from coal.

There are currently more nuclear retirements scheduled this year, at 5.3 GW, than coal retirements, at 4.3 GW. If natural gas replaces those nuclear plants, America will find itself further adrift from its climate goals.

‘Economics are against coal’

The good news for Biden is that there is a robust pipeline of renewable projects coming online. America is set to install more than 30 GW of wind and solar this year, well in excess of the record 24 GW that came online last year. An additional 22 GW is slated to come online in 2022.

And Biden’s nascent regulatory push also has yet to take shape.

"I wouldn’t worry quite yet, because they haven’t even started any actual policy yet," said Steve Cicala, a professor who studies power markets at Tufts University.

"The economics are against coal even as they are receiving massive subsidies from low royalty rates and not having to pay for pollution. Once they start paying for their pollution through some sort of climate policy, it’s all over. If they can’t hold their own when everything is stacked in their favor, they can’t hold their own once they’re on a level playing field."

Coal plant retirements are but one way to measure the decline in U.S. coal consumption. Falling electricity generation from coal is the other.

Coal generated 20% of U.S. electricity last year as demand for power slumped amid the coronavirus pandemic. The agency thinks coal generation will rebound to 22% of U.S. power production this year and 23% in 2022 thanks to an increase in natural gas prices and rise in power demand.

If Biden is to achieve his climate goals, that will need to be an annual anomaly.