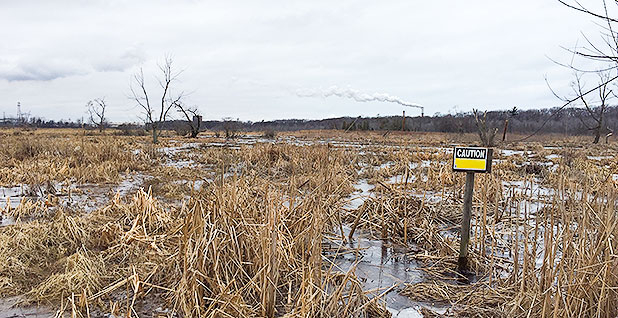 The smokestacks of Bailly Generating Station are seen rising above Cowles Bog in Porter County, Ind. The 604-megawatt coal plant is flanked by a steel mill operated by ArcelorMittal. Photo by Benjamin Storrow.

PORTER COUNTY, Ind. — Alex Tracy has spent most of his career in coal. Like many in this corner of northwest Indiana, Tracy got his start in the steel mills. He was employed in a coke plant, where coal is fed into the great blast furnaces that turn iron to steel.

The coke plant closed, but not before Tracy landed a job at the nearby Bailly Generating Station. Tracy has spent the last 13 years at the coal-fired facility, which towers over Lake Michigan and provides power to the maze of steel mills, refineries and other industrial operations that line its shores.

The job makes Tracy part of a decades-old equation. Bailly feeds the mills, the mills feed nearby Chicago. Now that’s all set to change. The power plant will close its doors in 2018.

"What I’ve seen tells me there is no future in coal," Tracy said, reflecting on the plant’s impending demise one recent afternoon. "The two places I’ve worked in the last 20 years basically are closing. And they’re all coal."

Bailly’s closure was announced one week before Donald Trump bested Hillary Clinton in the presidential contest. But while Trump and his congressional allies pursue a rollback of Obama-era environmental regulations in Washington, coal plants continue to close at a rapid clip across the country.

In the next four years, utilities have plans to close 40 coal units, federal figures show. Six closures have been announced since Trump’s victory in November.

Vectren Corp., a utility based in Evansville, Ind., said in December that it expects to close two coal plants by 2024. Dayton Power and Light Co. announced in January it will close two massive coal plants in southern Ohio next year.

And in Arizona, four utilities voted last week to shut down the Navajo Generating Station in 2019. The plant played the vital role of powering the set of canals that deliver drinking water from the Colorado River to Phoenix and Tucson.

The spate of closures underlines the challenges facing President Trump, who ran on a promise of revitalizing the coal industry. Utilities, beset by stagnant power demand and presented with cheaper alternatives like natural gas and wind, have shown little appetite for returning to the fuel that long powered the American economy.

"Unless those fundamentals change in some deep and fundamental way, I don’t see how you get anything other than rapid elimination of coal plants and certainly not any new ones," said William Hogan, a professor of energy policy at Harvard University.

The dynamics are particularly stark in northwestern Indiana. Coal has long been the fuel of choice for the region’s energy-hungry economy. Northern Indiana Public Service Co. (NIPSCO) operates three coal-fired facilities in the region, including Bailly. As recently as 2010, roughly 90 percent of NIPSCO’s electricity was generated by coal.

The utility’s plans now call for retiring Bailly in 2018, along with two units at a second plant in neighboring Jasper County in 2023. Together, the closures represent about half of NIPSCO’s coal capacity.

Few expect Trump’s election to change those trends. A NIPSCO executive offered a simple "no" when asked if a change in administration might alter the utility’s plans. Vectren planning documents show the utility expects future administrations to tackle carbon emissions, even if Trump does not.

Other industry leaders have gone even further.

Trump’s promises nevertheless have buoyed hopes among some here in northwest Indiana. The president won traditionally blue Porter County, where lawn signs proclaiming "Proud Union Home" are a common sight and many in labor blame U.S. EPA for coal’s demise.

"When you’ve got employees that are looking at your plant being shut down because of EPA, they’re willing to overlook Trump’s faults, as far as his grabbing pussy or whatever," said Vernon Beck, president of United Steelworkers Local 12775, which represents utility workers. "Because he’s the one who’s going to throw out regulations, which means we aren’t going to have to deal with this Clean Power Plan."

He added, "They just assume he saved our power plant."

NIPSCO’s decision to halve its coal fleet illustrates why Trump could find it difficult to fulfill his promises.

A surplus of electricity generation in the Midwest means NIPSCO can retire Bailly without building new replacement power — at least in the short term.

And NIPSCO’s estimates project it is now cheaper to build new natural gas or wind than coal. Planning documents show the company is most likely to meet any future generation needs with gas.

Which is exactly what the utility’s customers are pushing for.

"Energy is a huge input into the cost production of steel," said Frank Shambo, a NIPSCO executive. "They are acutely aware of the cost of natural gas and electricity. It is in their best interest, our best interest and our community’s best interest they remain viable given the jobs that they provide."

Mark Maassel, president of the Indiana Energy Association, a trade group, said coal is likely to remain an important part of his state’s generation mix. But the increasing deployment of natural gas and renewables has also been positive for Indiana, lowering costs and helping diversify the state’s power sector, where 95 percent of electricity was once generated by coal.

"For my 2 cents, the low cost of natural gas has been a benefit to those here in Indiana," Maassel said. "I sincerely hope we continue to make sure natural gas is the vital, important part of our industry that they’ve always been."

A struggle for the future

Others believe Indiana has moved too slowly and risks being left behind. While the Hoosier State’s reliance on coal has dropped, about three-quarters of its power still comes from coal. Nationally, that figure hovers around a third.

Indiana’s continued reliance on coal means the state is not investing in new jobs and new technologies, said Kerwin Olson, executive director of the Citizens Action Coalition, a consumers group. It also means Indiana ratepayers pay more when utilities invest in environmental upgrades to coal plants rather than switching to lower-cost fuels, he said.

"Indiana is long past due for a conversation about utility regulation and the future of energy," Olson said. "We need elected officials to do what is right."

For now, Indiana’s transition from coal has been relatively quiet. One city councilor in Porter said he was unaware of NIPSCO’s power plant closures until contacted by a reporter.

In part, that is due to the lack of layoffs resulting from Bailly’s closure. The facility employs roughly 110 people, but its aging workforce means many will retire when the plant’s boilers shut down next year. Those who remain will be transferred to other NIPSCO plants.

But the transition in other regions promises to be disruptive, especially in rural areas where coal plants form the backbone of the local economy.

In Arizona, leaders of the Navajo Nation appealed to Trump to save the 800 jobs threatened by the closure of the Navajo Generating Station. That figure includes employees at Peabody Energy’s Kayenta mine, which was built to serve the 2,250-megawatt coal plant.

The situation is similar in Ohio, where Dayton Power and Light’s J.M. Stuart and Killen stations employ nearly 500 people. The plants also account for a sizable portion of the local tax base.

Here in Indiana, there is also disquiet about what’s to come. At USW’s Local 12775 union hall, four power plant workers contemplated their future one recent afternoon.

They expressed doubts that renewables would be able to fulfill the role now played by coal, at least in the near term. Yet they also voiced hope that wind and solar could overcome their present limitations and could provide employment for workers like themselves.

Trump’s victory was good for his job in the short term, said Jon Grimley, a 12-year NIPSCO veteran who works at Bailly as a plant operator. But he openly worried about the president’s promise to gut EPA, which has helped improve air quality in a region where many cars once sported an orange sheen and the smell of the steel mills could be detected 25 miles to the south.

"In the long term, is that good for my kids?" Grimley asked.

“What I’ve seen tells me there is no future in coal.”

Jeff Mayer, who celebrated his 40th anniversary at NIPSCO this month, pointed to a photograph hanging on the walls of the conference room. In it, more than a dozen men are shown working on a turbine that once powered a now-retired coal plant.

There are more men working on that turbine, Mayer observed, than now work in the Bailly’s machine shop.

The older employees are sad to see coal go, Grimley responded. The younger employees just want it to hang on long enough for them to retire.

"That’s the problem," said Tracy, the mechanic who swapped the steel mills for the power sector. "We all say at least we have a job, but future jobs. It’s only 100 jobs here. A hundred jobs there. Fifty jobs there. They add up quickly. That’s these industries, these mills here. The coke plant is gone. They just keep closing all these industries."

Grimley returned to the subject of his children.

Several years ago, his son came to him and announced he wanted to follow his father into the power plant. Once, such a declaration would have been a point of pride. Today, Grimley is thankful his son’s career ambitions have changed. Instead of a future in a coal plant, the boy now wants to be a trombone player.