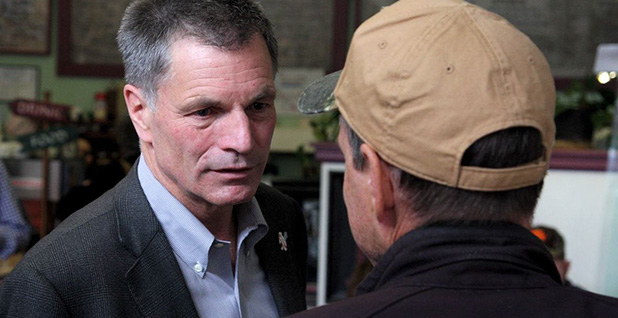 The governor of the largest coal state in the country isn’t shy about his disdain for the Biden administration’s potential pullback on fossil fuel development. But Gov. Mark Gordon recently announced that, like the president, he too wants to get to net-zero carbon emissions by midcentury.

In fact, the Republican rancher said his state should go beyond that goal.

"I challenge you to join me in making Wyoming net-negative in CO2 emissions," Gordon told lawmakers in Cheyenne, the state capital, last week during the opening remarks for the annual legislative session.

The session has already heavily focused on fossil fuels, which conservative lawmakers and the governor are aggressively trying to protect from market shifts and federal climate policies. A collection of bills under consideration attempt to keep coal-fired power plants burning in the state, even as utilities press for cheaper, cleaner alternatives.

While President Biden has emphasized that the country must embrace a shift to renewables to combat climate change and depress oil reliance in the form of diesel and gasoline, Gordon called his climate policies "science fiction." He agreed there must be some use of renewables and development of new clean energy technologies. But a key to reducing emissions in Wyoming will be an ambitious deployment of technologies to capture emissions, to use or store them and scrub the air of current pollution, Gordon said.

In an interview with E&E News from Cheyenne this week, the governor admitted it would be hard to pull off and acknowledged that he didn’t have a concrete plan.

"It is an emerging policy directive," Gordon said. "A lot of pieces have to fall in place."

Some technology he is championing, like blue hydrogen — hydrogen derived from natural gas where the carbon is captured and stored — is still an emerging business.

Meanwhile, some experts are skeptical of carbon capture at the level Gordon is suggesting, noting it has yet to be successfully commercialized and would be very expensive to deploy in a rapidly declining coal power sector.

Gordon said he knows how his promise sounds: "You’ve got great research going, but you can’t point to something in Wyoming that is sequestering carbon at scale. That is correct."

But the governor said he sees this as a yearslong expedition that Wyoming could blaze nationally.

"The research that we have is getting us further along that path," he argued.

If Wyoming were to achieve net-zero carbon emissions, it would be a significant step toward the Biden administration’s own goal of net-zero emissions in the United States by 2050.

In 2018, the U.S. Geological Survey reported that on average the carbon dioxide emissions from fossil fuels that were extracted on federal lands amounted to roughly 24% of national CO2 emissions.

Wyoming is no small chunk of that. The survey has also found that Wyoming is responsible for 57% of CO2 emissions from the extraction and combustion of fossil fuels from federal resources. For 2014, the year considered in the report, that totaled 727 million metric tons of carbon dioxide.

The state was also the highest for methane emissions, responsible for 28% of the federal footprint, more than New Mexico, the Gulf of Mexico and Colorado.

The reason Wyoming marks so high in federal emissions is the state produces roughly 40% of the thermal coal in the country, which is shipped to power plants through the West and Midwest and burned for electricity.

It is also the largest producer of onshore natural gas on public lands and the second-largest onshore federal oil producer — products that are piped to refineries or power plants for uses like carbon feedstock, diesel fuel, gasoline, jet fuel and, of course, power production.

At first, those arms-length uses of Wyoming coal or oil aren’t targeted in the carbon negative goal, said Michael Pearlman, the governor’s spokesman.

"He is going to focus first on what is produced in Wyoming," Pearlman said in an email. "That doesn’t mean we won’t work with those markets where our products are consumed."

Even this more modest ambition is a high bar.

The second-largest source is industrial production, then transportation and other lesser sources.

Houser ticked off a list of strategies that combined would help Wyoming meet that goal.

First, the state would need to replace the power fleet in Wyoming with zero-carbon sources, like nuclear or renewables. It could also retrofit existing power plants with carbon capture technology.

Then, Wyoming would need to ramp up electrification wherever possible in the industrial and transportation sectors. Where electrification isn’t viable, Wyoming would need to utilize low carbon sources like biofuels. And it would likely need to deploy carbon dioxide removal to offset the remaining emissions, such as direct air capture or natural carbon removal, Houser said.

Gordon has focused hardest on the capturing of CO2 from power plants.

"The use of coal is under assault," Gordon told lawmakers last week while touting carbon capture’s future. "Paradoxically, it is that very industry that offers the best and most efficient way to remove CO2 from our atmosphere."

However, Rob Godby, acting associate dean at the Haub School of Environment and Natural Resources at the University of Wyoming, said Gordon’s net negative plans are largely aspirational because of the difficulties inherent with carbon capture.

"I would argue that it’s far too optimistic," Godby said of the idea of deploying carbon capture at scale. "It’s very difficult to imagine every single power plant in Wyoming adopting this. The cost would be astronomical and clearly Wyomingites can’t afford that."

The state has taken some steps forward in working on this issue, although still at the research level.

The University of Wyoming is spearheading work on the injection of carbon dioxide into geological formations for long-term storage. Pearlman said the Wyoming Energy Authority similarly has launched a hydrogen initiative.

There are also two active carbon dioxide capture or utilization operations in the Wyoming private sector today. Exxon Mobil Corp.’s Shute Creek facility siphons off the CO2 mixed in with natural gas from the LaBarge natural gas field and sells it to industry to use in stimulating old oil reservoirs.

And there is Wyoming’s crown jewel in carbon capture: the Wyoming Integrated Test Center in Gillette, which was launched by the state in 2014.

The test center is not an operational carbon sequestration project, however. Its test bays can only siphon a fraction of emissions and are only in use when researchers need them.

The state is pressing for more private partnerships and federal grant funding on carbon storage: A $15 million Department of Energy grant is undergirding a University of Wyoming and Basin Electric Power Cooperative attempt to establish a carbon storage project near the Dry Fork power plant that could store up to 50 million tons of the gas.

The project reveals the scale of the challenge as much as a potential solution. It would be large enough to hold about one year’s worth of the state’s emissions from its power plants alone, with a little room to spare.

Gordon said he was "very encouraged" after recent conversations with both Energy Secretary Jennifer Granholm and climate czar John Kerry about the importance of carbon capture and federal investment for the Biden administration.

Gordon has been accused of overstating the potential impact on Wyoming of the Biden administration’s approach to fossil fuels, such as the current pause on new federal oil and gas leasing.

A study on potential Biden policies commissioned by the state and carried out by a University of Wyoming professor has recently come under fire after Politico and The Guardian reported on the close relationship the study’s author had with the oil group Western Energy Alliance.

But in-state experts say Wyoming is facing a historic reckoning on fossil fuels with an uncertain outcome.

Wyoming coal production has been halved in the last five years, according to Mine Safety and Health Administration data, as power plants shuttered and cheaper gas and wind resources were built.

Federal oil policies and climate change could further shrink the oil and gas industries, as could cyclical downturns in the price of commodities.

Shannon Anderson, a lawyer for the landowners group Powder River Basin Resource Council in northern Wyoming, said Gordon is in "fight mode" with the Biden administration when he should be trying to leverage its help to face the inevitable fossil fuel transition.

The state is doubling down on fossil fuel development and in doing so losing a chance to garner investment from the federal government that would help it survive the decline of its coal sector, she said.

"The conversation has passed us by," Anderson said. "We are losing opportunities every day."