Coal rule might help client of ex‑lobbyist who crafted it 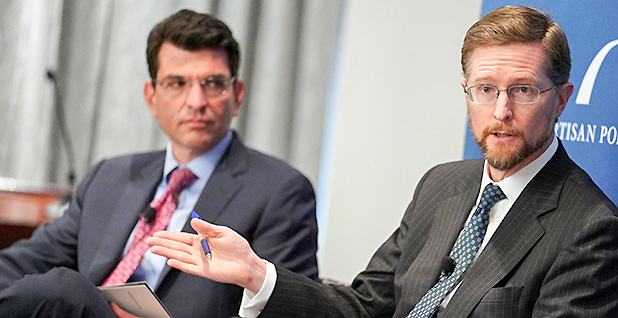 The official who’s leading the charge for the Trump administration’s effort to subsidize coal plants is a longtime lobbyist who represented a troubled Ohio utility that stands to directly benefit from the proposed change.

Sean Cunningham lobbied on behalf of FirstEnergy Corp. for 6 ½ years before becoming executive director of the Department of Energy’s Office of Energy Policy and Systems Analysis this year.

His efforts have failed to assuage some industry critics, who believe the administration’s initiatives have gone beyond helping the coal industry to providing advantages to specific businesses.

The Energy Department proposal, which would pay coal and nuclear plant owners for storing 90 days of fuel on-site, has attracted powerful opponents at some of the nation’s largest power generators.

Those comments come during a period of uncertainty for the Akron, Ohio-based utility. Depressed power prices and stagnant demand in the PJM Interconnection, a wholesale market stretching from Maryland to Illinois, have pushed many of FirstEnergy’s coal and nuclear plants to the margins.

Jones recently downplayed his advocacy, telling financial analysts during a recent conference call, "I don’t think the DOE initiative has anything to do with FirstEnergy despite what’s been reported in some of the media." FirstEnergy, he added, remains intent on exiting the merchant generating business regardless of how DOE’s proposal turns out.

Cunningham then did a stint as counsel to Republicans on the House Energy and Commerce Committee, where he helped write and negotiate parts of the Energy Policy Act of 2003, before returning to the private sector in 2004. He picked up FirstEnergy as a client for Balch once again and was retained by the company when he moved to Hunton & Williams LLP, a prestigious law firm with long-standing ties to the utility industry, in 2005. FirstEnergy remained among Cunningham’s roster of clients, which also included American Electric Power Co. Inc., Duke Energy Corp. and Southern Co., until 2008.

Cunnigham has also delved into debates over climate change. Last year, during another stint at Balch, he helped author an amicus brief for members of Congress opposed to the Clean Power Plan, former President Obama’s rule to reduce emissions at power plants.

Dan McCrary, a partner at Balch, said much of Cunningham’s work at the firm centered around the Federal Energy Regulatory Commission.

"We had a long history with Sean. He’s a very thoughtful, strategic thinker," McCrary said. "He gets the big picture."

DOE officials sought to downplay the connection between Cunningham and FirstEnergy, and his role in crafting the department’s proposal. They noted that Cunningham has not worked as a registered lobbyist since 2013. Much of his lobbying at Hunton was focused on attachments to utility poles. And they said he had not spoken to FirstEnergy since at least 2013.

Shaylyn Hynes, a DOE spokeswoman, said the department’s proposal was the result of a "deliberative internal process."

But while Cunningham’s lobbying days ended four years ago, his former employers remain close. Hunton continues to lobby on energy and environment legislation for FirstEnergy today.

Recently, Cunningham has assumed a more public role defending the plan. At a forum hosted by the Bipartisan Policy Center on Tuesday, he framed the retirement of coal and nuclear units as a national security issue. DOE’s proposal, he argued, is an attempt to halt that trend (Energywire, Nov. 1).