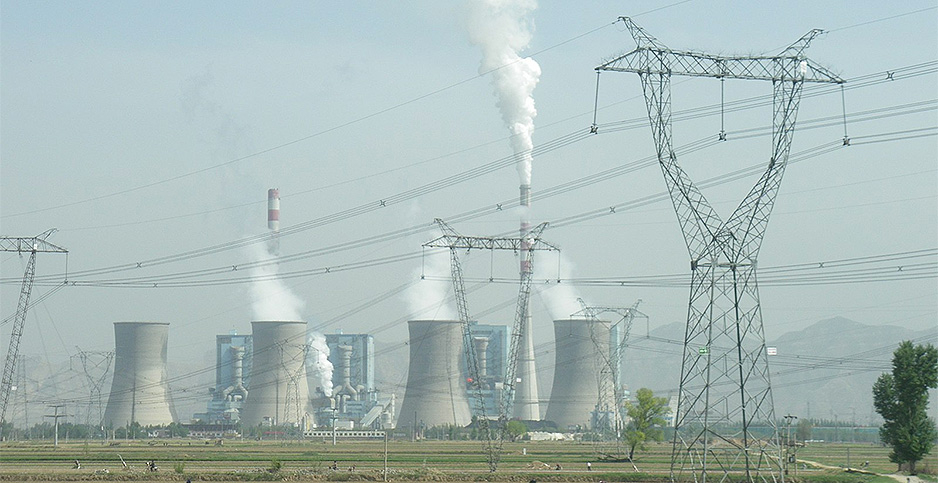 China is under pressure to go on a building spree of coal-fired power plants to resuscitate its economy. A plant is pictured in Shuozhou, China. Kleineolive/Wikipedia

China is a world leader on renewable energy, on electric vehicles and in setting carbon dioxide reduction goals. But it’s also under pressure to build more coal-fired power plants over the next five years.

"This is a study in contrasts," explained David Sandalow, a researcher at Columbia University who specializes in China’s energy policy.

In a newly published paper, Sandalow points out that China leads the world in the development of solar, wind and hydroelectric power.

Last year, Chinese companies sold 1.2 million electric vehicles, more than the rest of the world combined. Ninety-eight percent of the nearly 500,000 electric buses in the world are carrying passengers in China.

The downside, explained Sandalow in an interview, is that China’s government is facing increasing pressure to raise what has been a ceiling on building coal-fired power plants. Much of the push comes from the China Electricity Council, which he says represents coal companies and traditional power generators.

Since 2012, China’s leaders have pushed hard to lower what have been notorious levels of air pollution. "Some people called it airpocalypse," Sandalow noted, but he added that recently China’s concern about the effects of burning coal, particularly its close connection to climate change, has been ebbing.

In May, according to Sandalow, China’s premier, Li Keqiang, said in a speech to the National People’s Congress: "We will promote cleaner and more efficient use of coal."

Meanwhile, movement toward a national cap-and-trade system to reduce CO2 emissions, much of which comes from burning coal, also appears to have slowed, despite pilot programs that have been tested in at least seven Chinese provinces.

Early next year, when the terms of China’s five-year plan are settled, more may be known about the country’s new thrust on coal, explained Sandalow, a former acting undersecretary of the Department of Energy under President Obama. Sandalow oversaw programs on renewable energy and energy efficiency and took part in climate change negotiations.

China’s upcoming five-year plan, and the level to which it limits coal-fired power capacity, "will be one of the most closely watched indicators of the Chinese government’s commitment to fighting climate change," he said.

In theory, at least, the U.S. and China have much to learn from each other in their sporadic efforts to fight climate change. Sandalow points out in his recent paper — published last month by the Asia Society Policy Institute — that 27% of greenhouse gases emitted globally in 2019 came from China.

The U.S. came in a distant second, producing 13%. But measured on the basis of emissions per capita, the U.S. ranks first in the world, followed by Japan and then China, he noted.

"If there is a Biden administration," said Sandalow, referring to the Democratic candidate for the U.S. presidency, "this will be a very important dynamic to watch. The U.S. federal government’s climate policy will change by 180 degrees."

In China, he said, people still see climate change politically coupled with the nation’s long and ugly experience with dirty air. "China has become wealthy enough that there’s a large middle class that just doesn’t tolerate pollution at these levels. It’s been a top issue for many parts of the country over the past decade. The air’s still bad by U.S. standards."

While Sandalow hopes to see the U.S. and China working together on climate issues, he notes that there are a number of differences between the nations’ policies that won’t be settled right away, even in a Biden administration.

In the longer term, he said, "there will be obvious opportunities to work together on climate change and on global health issues such as the coronavirus."

For example, while most U.S. auto manufacturers are just beginning to feel their way into battery-powered electric vehicles, China’s government continues to push what it calls "new energy" vehicles. At the moment they are mostly battery-powered, although Sandalow notes that the term also includes vehicles equipped with fuel cells — that make electricity from hydrogen. They are "receiving growing attention from policymakers," he said.

While Li, China’s premier, made no mention of climate change in his May speech to the National People’s Congress, he spent some time calling for more investment in a national electric vehicle charging structure, hoping to solve a problem that the U.S. is just beginning to work on, Sandalow pointed out.

Working together with China on related climate solutions, such as promoting the more efficient use of electric vehicles, may not be easy, Sandalow said, "because there are nationalism issues in both countries that could pull us apart."

Other joint climate-related experiences that might be worth sharing include nuclear power plants. The U.S. has the largest fleet of them in the world, followed by France and then China, which has begun to build more of them than anyone else in recent years, according to Sandalow.

Then there is forestry. China pledged to increase the volume of its forest stock by 4.5 billion cubic meters from 2005 levels by 2030. Last summer Li announced that the country had met its goal 11 years ahead of schedule, after a ban on logging in primary forests and a massive tree-planting program.