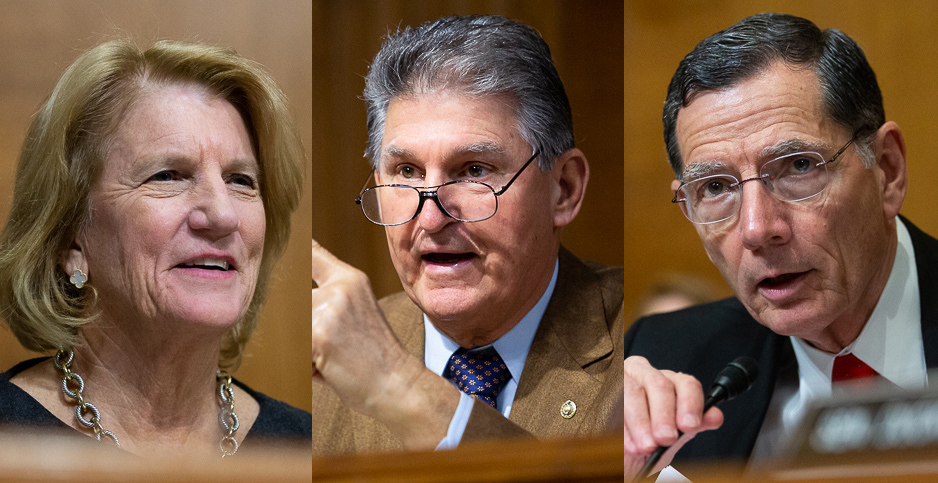 While the 117th Congress is still many months — and an election — away, Senate Republican term limits will create a scenario that could end in three senators from coal-producing states leading panels with primary jurisdiction over energy and environmental policy.

That means Sen. Lisa Murkowski of Alaska will vacate her seat as top Republican on the Energy and Natural Resources Committee, creating a powerful opening.

Senators are often loath to discuss such matters so far out, but the No. 2 Republican on ENR, Wyoming Sen. John Barrasso, is expected to trade his current spot atop Environment and Public Works for Murkowski’s.

The Energy and Natural Resources Committee’s jurisdiction over the Interior and Energy departments would provide Barrasso a useful platform to press the interests of his home state, which produces about 40% of U.S. coal — more than any other state.

Barrasso would serve with top committee Democrat Sen. Joe Manchin of West Virginia. Manchin is one of his party’s most pro-coal members.

Barrasso yesterday said, "My sole focus is to make sure that the Republicans maintain a majority in the Senate and that I will then be a committee chairman come the next Congress."

To be sure, retirements or other unforeseen events could alter committee lineups. But should Barrasso rise at ENR, he would clear a path for West Virginia Sen. Shelley Moore Capito to become the top Republican on Environment and Public Works.

"I’m up for reelection this year, and I’m not thinking past Election Day," Capito told E&E News recently. "I don’t really have an opinion on it, but I know there’s lots of talk about that."

If Barrasso decides to stay put at EPW next Congress, Sen. Jim Risch is next in line in seniority for Republicans on Energy and Natural Resources. But the Idaho Republican says he has no plans to move up the ranks there.

"I’m going to be staying on as top of Foreign Relations," Risch confirmed to E&E News before the holidays.

The Utahn is a small-government conservative who played a major role in derailing a broad bipartisan public lands package in the closing days of the 115th Congress (E&E Daily, Dec. 20, 2018).

For her part, Murkowski this week confirmed she is eyeing the top GOP spot on the Indian Affairs Committee next year. "That is the next stop where there’s a clear path," she told E&E News.

That position would allow Murkowski to tend to Alaska Natives — a key part of her base — who make up about 15% of the state’s population.

When Sen. Lamar Alexander (R-Tenn.) retires at the end of this year, Murkowski will be fourth in seniority among Republicans on the Appropriations Committee.

Ahead of her are Chairman Richard Shelby (R-Ala.), who is expected to remain the top GOP appropriator in the next Congress; Senate Majority Leader Mitch McConnell (R-Ky.), who is unlikely to vacate that post; and Sen. Susan Collins (R-Maine), who faces a tough reelection fight in November.

Should she run and win reelection in 2022, Murkowski will be closer to attaining the top GOP spot on Appropriations — a perch from which her mentor, the late Sen. Ted Stevens (R-Alaska), used to wield considerable clout.

In the next Congress, Murkowski said she has no plans to give up her spot as the top GOP appropriator in charge of the Interior Department and EPA.

"That was where I wanted to get ultimately, and to be able to do that as readily as I did, I’m in a good spot there," she said this week.