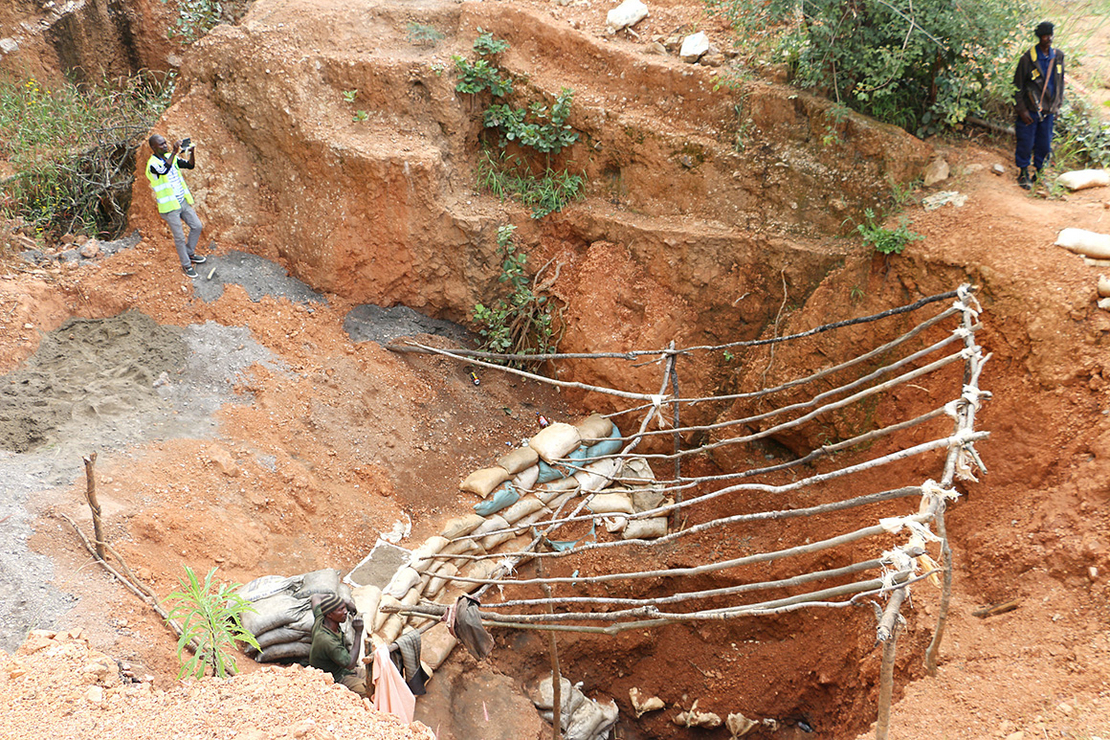 Part of a cobalt mine in Katanga province in the Democratic Republic of Congo. Fairphone/Flickr

The solar industry was rattled last year when the United States cracked down on imports linked to the Chinese government’s repression of Uyghur Muslims.

Human rights groups now are concerned about alleged abuses linked to another key component for clean energy: cobalt, a silvery-blue battery metal that is pivotal for electric vehicle batteries.

This time they’re not holding out hope the U.S. will take steps to deal with the harsh labor conditions identified in the Democratic Republic of the Congo.

For a complicated set of financial, legal and political reasons, experts told E&E News they expect the U.S. to do little to address what its own government agencies acknowledge is a blot that taints the transition to a zero-carbon future.

The DRC, sometimes called the “the Saudi Arabia of the electric vehicle age,” produces about 70 percent of the world’s cobalt. About 80 percent of cobalt processing occurs in China before being incorporated into lithium-ion batteries.

But given the country’s dominance, auto and technology companies are effectively stuck sourcing from the DRC, advocates say, until engineers figure out how to make cheap cobalt-free batteries.

“There’s just no appetite in America for this at the moment,” said Anneke Van Woudenberg, executive director of U.K.-based human rights organization RAID.

Allegations of forced labor in Chinese polysilicon factories prompted Congress last year to pass a blanket ban on solar imports tied to one region of that country. Customs officials impounded huge shipments from at least three companies, and blacklisted one major Chinese supplier. Polysilicon is a key input for most types of solar panels.

Products using Congolese cobalt, like the lithium-ion batteries used in EVs and energy storage, have escaped those kinds of enforcement actions. Advocates say that’s because while the conditions in many Congolese cobalt mines are brutal — featuring low pay, long hours, harsh conditions and, sometimes, abuse from superiors — they fail to meet the standard for forced labor. That’s a key legal distinction that can prompt abrupt seizures by customs guards and other tough measures.

Still, the Biden administration has refused to categorically rule out the existence of forced labor in Congolese cobalt mines.

The White House declined to comment for this story.

In recent weeks, the Biden administration has made broad statements prioritizing the need to responsibly source metals for the energy transition.

The Interior Department released a set of principles for sourcing minerals, which stressed the importance of “socially responsible” mining. The Energy Department unleashed a voluminous set of reports on supply chains, identifying cobalt supplied from Congo as a risk for manufacturers and a need to promote human rights standards at mines abroad.

A DOE report identified cobalt as an area in the lithium-ion battery supply chain where the department wants to see “environmental, climate or human rights issues” in the supply chain “adequately addressed.” However, that report did not address reports of human rights abuses at Congolese mines.

Compared to the solar panel actions, few people are advocating for the U.S. to use the blunt instrument of government to reign in bad actors in the world of cobalt mining.

“I don’t know if any [nongovernmental organization] is filing that kind of complaint for cobalt,” said Jim Wormington, senior researcher for Human Rights Watch. “The main reason why they probably wouldn’t do that is that even pro-human rights groups don’t want Congolese cobalt to not be bought.”

Indeed, Western human rights advocates, or their Congolese affiliates, aren’t eager to see strict sanctions against cobalt buyers, for fear of endangering miners’ livelihoods in a deeply impoverished part of the world.

“No one amongst those actors are advocating for a move away from cobalt production in DRC,” said Daniel Mulé, a policy lead on extractive industries for Oxfam America. “I don’t think that’s the right approach for [original equipment manufacturers], vehicle manufacturers or from the U.S government.”

Organized labor hasn’t pressed their interest in onshoring of cobalt mining either. Although most cobalt from DRC goes to China for processing and many mines are owned by Chinese companies, China-hawk conservatives have, for the most part, also stayed out of the fray. Even American cobalt miners don’t want to see a clampdown hit their biggest competition.

“What they desperately need is governance and money. They really, really need people to come in and say we’re going to do this right. They don’t need everyone to run away,” said Greg Young, executive general manager of Jervois Mining Ltd., a company developing a cobalt mine in Idaho. “That’s exactly what they don’t need.”

The predicament raises a question: When might cobalt’s human rights record undermine the work of electric automakers and battery companies?

“The answer is, as soon as it’s prioritized by politicians in the United States,” said Morgan Bazilian, professor and director of the Payne Institute for Public Policy at the Colorado School of Mines. “It’s as simple as that.”

A long history of problems

The U.S. has cracked down on Congolese minerals before.

Congress included language in the 2010 Dodd-Frank financial law that targeted the sale of conflict minerals from the DRC. The goal was to address profits from four commodities mined in Congo — gold, tin, tantalum and tungsten — that civil society groups linked to violence in the aftermath of the Second Congo War.

About 40,000 children labored in those mines, making up about one-fifth of the world’s cobalt supply at the time, the group estimated.

Unlike during Dodd-Frank, Congress avoided wading into the matter. There was little appetite: The report landed at the tail end of the Obama administration, after a yearslong court dispute between the Treasury Department and industry associations over the conflict minerals law.

Within a year came President Trump, whose White House was no fan of the conflict minerals law: In February 2017, his staff drafted an executive order nullifying the language, which was never adopted, according to multiple media reports (Greenwire, Feb. 8, 2017).

Since 2017, the global economy has become more reliant on cobalt, thanks to the dominance of consumer technologies — like laptops and cellphones — and the growing demands of electric car manufacturers (Greenwire, Dec. 15, 2017).

Manufacturers have sought to address the human rights dilemma by cutting cobalt out of their supply streams. Although cobalt-free batteries are not considered by automakers to be ready for wide use in EVs, Tesla Inc. and other EV manufacturers do plan to wean off the metal over time.

At the same time, through corporate responsibility initiatives, companies have deployed complicated webs of certification — like the Responsible Minerals Initiative — to answer any concerns about human rights in their cobalt supplies themselves.

Those involved in this system of industry-led checks say it’s a step in the right direction.

“They’re not perfect, but [companies] actually are doing quite a good job on them,” said Raphaël Deberdt, a minerals program associate at the Responsible Sourcing Network, whose director sits on the board of the Responsible Minerals Initiative. The initiative is an industry auditing program that tracks for abuses in certain mineral supply chains, including cobalt.

Some industry analysts say it’s important for the public to know these systems of self-auditing are no replacement for government regulation.

“Allowing companies to self-report, it’s really one half of the coin. It’s really about ensuring there is a big stick where there are consequences,” said Kwasi Ampofo, head of metals and mining for BloombergNEF.

“Companies would prefer to self-regulate themselves. It’s up to the government to decide how high they should jump.”

This is also where the solar industry’s problems with Chinese polysilicon are distinct from those of Congolese cobalt: They involve unambiguous evidence of widespread, state-sponsored forced labor, which crosses a legal red line.

China’s forced labor programs, which detain Uyghurs and other Muslim minority groups, essentially create a pipeline from jails to factories, including sites that make polysilicon and its precursors for solar panels, according to rights advocates.

Political and cultural indoctrination often gets paired with obligatory labor, curtailed freedom of movement, surveillance and threats. Human rights advocates say the programs are a form of cultural genocide.

In the U.S., customs agents have broad discretion to detain any import they suspect is made with forced labor, under the 1930 Tariff Act.

That took place with solar shipments on at least three occasions last year, according to news reports and solar industry sources. One such shipment reportedly involved 100 megawatts’ worth of panels — enough for several utility-scale solar projects.

Spokespeople for SEIA now say they believe most of their members have moved supply chains out of Xinjiang, where forced labor programs are centered. The region’s products will soon be the subject of a blanket ban under a law passed by Congress late last year.

In the DRC, by contrast, human rights groups for years have documented conditions at cobalt mine sites they view as abhorrent — but which they say fail to meet that key legal threshold for forced-labor enforcement.

In November, RAID reported that, at five of the largest cobalt mines in the DRC, workers have been physically abused by managers, paid far below a livable wage and trapped in unfair labor agreements (Greenwire, Nov. 8, 2021).

Unlike the Amnesty report on artisanal mines, RAID was able to directly link the cobalt mined at the facilities they alleged of wrongdoing to manufacturers that utilized the metal. But the group didn’t identify any activities they would describe as forced labor or child labor.

“There are lots of other problems, but not those two specific issues,” Van Woudenberg told E&E News.

After initial media coverage of the report, U.S. companies reached out to RAID, and the group has briefed staff of a U.S. Senate committee, Van Woudenberg said, but there hasn’t been any action from the government or American companies.

A significant amount of the cobalt mined in the DRC is processed in China, and some of the large industrial cobalt mines are owned by Chinese companies.

But advocates doubt the bill would pass in the current environment.

“The threshold at the moment, in the United States, to get passage of human rights legislation, you’ve got to reach an extraordinarily high bar,” Wormington said.