Cold is coming. Get ready for Thanksgiving climate talks 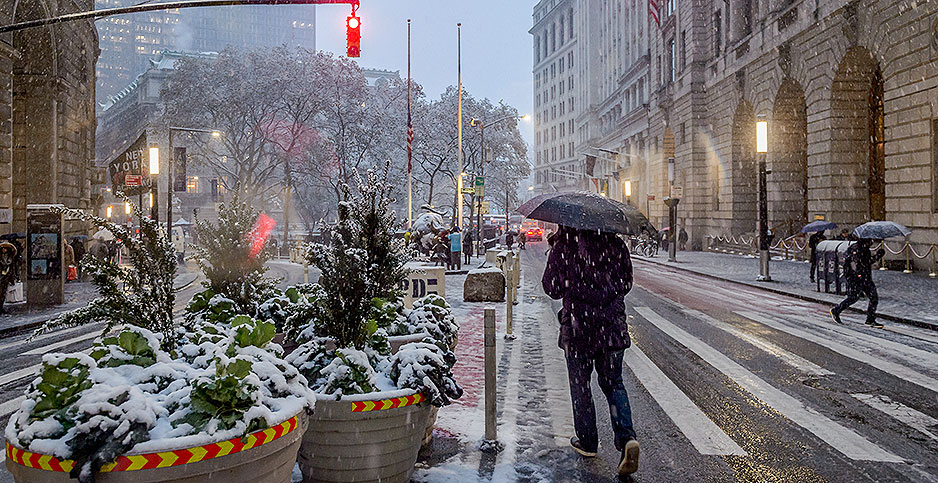 It snowed in New York City last week. This Thanksgiving may be among the coldest in many places in the United States. Erik McGregor/Sipa USA/Newscom

Just in time for Thanksgiving, a wave of wintry weather is descending on the United States, bringing snow and record low temperatures to some regions.

In the Northeast, reports suggest it could be among the coldest Thanksgivings on record, with high temperatures hovering in the 20s.

During ongoing national conversations about climate change, severe or unusual winter weather often prompts a fresh wave of skepticism from those who question the science of human-caused global warming. Less than a year ago, when 2017 was closing with some of the chilliest year-end temperatures on record, President Trump posted a tweet suggesting that the country "could use a little bit of that good old Global Warming."

As climate experts have tirelessly pointed out over the years, individual weather events and short-term temperature fluctuations don’t provide proof of the existence or nonexistence of climate change. Long-term climate records do — and they unambiguously show that the climate has been steadily warming for decades, even with the occasional very cold winter or extreme blizzard thrown in. In many places, winter temperatures are actually rising even faster overall than summer temperatures.

That said, while individual events shouldn’t be confused with the long-term climate record, it’s also true that climate change can affect long-term trends in the weather — causing storms to become more intense or heat waves to become hotter over time, for instance. And that means some individual weather events can be useful for understanding or illustrating the progression of climate change.

Think of it this way: By themselves, with no context, an extreme heat wave in the summer and an extreme cold snap in the winter may not mean much. But if a look at long-term records suggests that summer temperatures in that region are gradually getting higher, then it may be reasonable to suggest the heat wave has been influenced by global warming, or at least that it’s consistent with the long-term pattern — in fact, scientists can now use models to figure out whether climate change has affected an individual event. On the other hand, if long-term records also show that winter temperatures have been rising for that region, the cold snap may be just a short-term weather anomaly.

It’s a complicated balance, one that’s often difficult to talk about accurately. Still, weather events crop up in climate change conversations all the time, particularly political ones — sometimes appropriately and sometimes not. And it’s not a new phenomenon, either.

‘Lucky’ on a hot day

Back in 1988, climate scientist James Hansen delivered landmark testimony to a Senate committee, declaring that human-caused climate change not only was a real thing but had already begun to reshape the planet. That day, June 23, happened to hit a sweltering 98 degrees Fahrenheit in the nation’s capital as Hansen delivered his statement — a circumstance, he later remarked in interviews, that was a "lucky" underscoring of his point. Since then, any interviews or articles that revisit the 1988 testimony tend to bring up the fact that it was, indeed, a very hot day.

In truth, the heat that day didn’t set any records — June heat in Washington, D.C., had been known to soar above 100 degrees on occasion. And Hansen never claimed that a single day’s heat was proof of global warming. But he did point to the long-term record and the fact that temperatures in Washington and elsewhere around the world had been steadily rising for decades. Just months later, scientists would confirm that 1988 had earned the title of hottest year on record, up to that point. June 23, and even 1988 as a whole, may not have been "proof" of climate change — but they did fall in line with the overarching long-term trend.

On the other hand, there’s also a long history of distorting the significance of weather in the United States, particularly winter weather. One of the most famous such incidents was just a few years ago, in February 2015, when Republican Sen. Jim Inhofe of Oklahoma brought a snowball onto the Senate floor as evidence against the existence of climate change.

Inhofe was correct that February 2015 saw some cold weather on the East Coast. In fact, Washington saw a record low a few days before Inhofe made his point. Yet one cold month in one region of the country didn’t manage to upset the bigger trend — 2015, like 1988, closed as the hottest year on record up to that point. More importantly, compared with the past 150 years of warming records, February 2015 in Washington’s corner of the world hardly qualifies as a blip on the radar.

Inhofe’s stunt may have been dramatic, but it also wasn’t new — scientists have been explaining at least since Hansen’s testimony that an extreme winter here and there doesn’t negate the overall progression of climate change. In a New York Times column in 1994, science reporter Jonathan Weiner noted, "When I ask people if they ever think about the greenhouse effect, they like to remind me that ice paved the streets last January, trees fell across power lines in February and the North Pole insinuated itself through the windowpanes even in March." He went on to point out that the long-term trend pointed to the existence of global warming.

In more recent years, winter weather has increasingly become a weapon among politicians who express skepticism about climate change.

For instance in 2008, the Times reported that Marc Morano — then communications director for the Inhofe-led Republican minority on the Senate Environment and Public Works Committee — published a roundup of recent news articles commenting on the record cold some parts of the world had seen that year under the title "Earth’s ‘fever’ breaks: Global cooling currently under way."

And Trump has made other comments in recent years, some before he assumed the presidency, suggesting that temporary weather conditions may mean global warming isn’t actually happening. In 2014, for instance, he posted a tweet referencing freezing temperatures and commenting, "This very expensive GLOBAL WARMING bullshit has got to stop."

Still, weather events can be important — and appropriate — means of discussing the impacts of climate change, as long as they’re placed in the right context. Changes in extreme weather patterns are increasingly a part of scientific discussions about the effects of global warming, which research suggests is affecting everything from the rainfall produced by hurricanes to the dry conditions that lead to wildfires.

Similar conversations have arisen around the more destructive hurricanes of the past few years, including Florence in 2018 and Maria and Harvey in 2017 — all of which studies suggest were probably made worse, individually, by the influence of climate change.

But any suggestions that this week’s frosty Thanksgiving weather negates more than a century of records that point to global warming are off-base. Sometimes weather really is just weather.