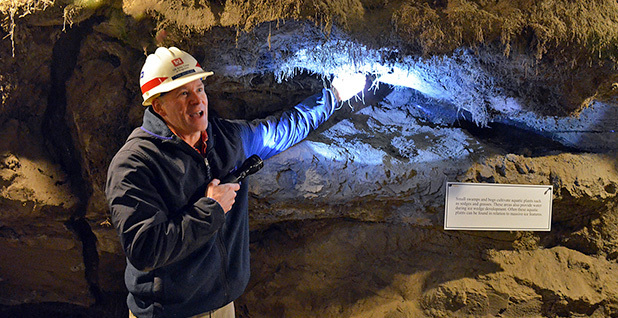 FOX, Alaska — Ten miles north of Fairbanks, along a man-made valley cleared by industrial gold dredgers in the early 1900s, a small red building at the base of a hill provides a portal to the geologic history of central Alaska.

Behind a locked metal door lies the Cold Regions Research and Engineering Laboratory, a 360-foot tunnel that gives scientists hands-on, underground access to frozen permafrost dating from the present to nearly 50,000 years in the past.

Operated by the Army Corps of Engineers and the Institute of Northern Engineering at the University of Alaska, Fairbanks (UAF), the permafrost tunnel offers a unique look at the underside of Alaska’s frozen subsoil.

The site was excavated in the early 1960s, initially for use as a Cold War-era storage facility. Later, the U.S. Bureau of Mines added a second branch to the tunnel to test excavation technologies.

In recent years, the facility has become a natural laboratory for ecological studies, with increasing emphasis on how Alaska’s warming temperatures will impact ground conditions in the state.

UAF scientists are digging a second tunnel into the hillside to provide space for additional studies on climate change and issues related to building on permafrost. Future plans envision linking the two tunnels to create a network of underground passageways that would give scientists a 3-D view of the ice wedges and other permafrost structures.

Researcher ecologist Andrew Balser said the permafrost tunnel allows scientists a rare chance to study a variety of permafrost ice formations that have remained undisturbed and frozen for thousands of years.

"A lot of what I do in the summer is run around northern Alaska looking for thermokarst features that have just formed, because the side walls still have permafrost in them," explained Balser, who is joining the Cold Regions Research and Engineering Laboratory this spring. Thermokarst lakes are small ponds that form as ice-rich permafrost thaws.

"You work like crazy for a couple of hours to scrape down the sides of the lake to the still-intact ice, and measure and document the ice on a sunny day before it melts," he said.

Gesturing to the massive ice formations embedded in the tunnel wall, Balser noted that "this is a dense concentration of different types of permafrost in one really accessible area. Here it’s a real luxury to study the permafrost."

A frozen hotbed of research

Visiting the tunnel is a vivid sensory experience. A string of dim mining lights reveal ice wedges, dried vegetation and prehistoric bones embedded in a fine-grained soil known as loess. The frozen materials, which date back to the last ice age, emit the pungent, musty smell of decomposed plants and the ancient silt.

To keep the walls intact, the tunnel is cooled to 26 degrees Fahrenheit in the summer. In winter, cold air from outside is piped into the facility. Plastic pathways run along the tunnel floors. Fine soils falling from the walls create a carpet of dustlike silt that is easily kicked up by visitors in the tunnel.

Glaciologist Matthew Sturm from UAF’s Geophysical Institute explained that scientists have come to the tunnel to do research used in more than 70 technical papers on topics ranging from mining, engineering, geology and biology to paleontology and surface geophysics.

The engineers who built the Trans-Alaska oil pipeline came to the facility to study the best designs for building on frozen permafrost-laden lands. NASA scientists conducted soil studies at the tunnel to prepare for the agency’s mission to Mars.

Other researchers have actually found dormant bacteria in a tunnel ice wedge. After being thawed in a laboratory, the bacteria were revived and remarkably started reproducing after 25,000 years frozen in the permafrost.

"In the last couple of years, the amount of interest in ancient DNA and genomics and life in extreme environments has really expanded," said Thomas Douglas, senior scientist at the Cold Regions Research and Engineering Laboratory, who was part of the tunnel bacteria study.

As the temperatures warm in the Arctic, the impact of melting permafrost is becoming increasingly important. Balser is part of a research project examining the types of greenhouse gases that are likely to be released into the atmosphere as permafrost soil and ice melt.

A recent study of permafrost throughout the Arctic found that tundra ice wedges are melting more rapidly than anticipated, changing the hydrology of the region and potentially accelerating the release of greenhouse gases, with major implications for global warming (ClimateWire, March 15).

"We know that permafrost soils contain double the amount of carbon that’s in the atmosphere now," Balser said. "But how much of that is really going to wind up in the sky" as the permafrost thaws?