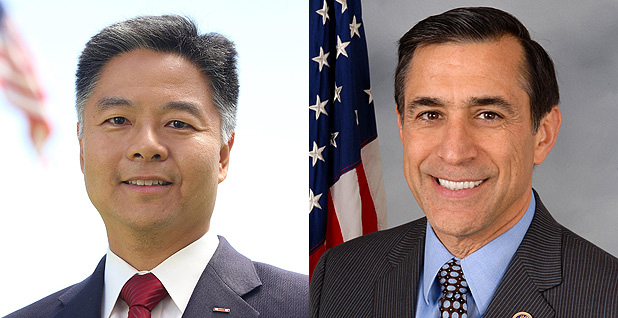 (Left to right) Climate hawks like Rep. Ted Lieu (D-Calif.) wonder how much Republicans in the Climate Solutions Caucus, like Rep. Darrell Issa of California, will achieve under President Trump. Photos courtesy of @tedlieu via Twitter and Congress/Wikipedia.

Progressive Democrats in the House aren’t counting on climate-savvy Republicans to lend muscle to the heavy lift of fighting global warming in the era of President Trump.

Observers see the push for tax reform and the White House’s $1 trillion infrastructure package as potentially opening a window for votes to occur on carbon pricing — an option some on the environmental right support — or clean energy subsidies. The upcoming appropriations fight is also likely to magnify the administration’s antagonism toward climate action.

Look no further than California’s delegation for evidence that congressional climate hawks on the left — while widely supportive of the fledgling GOP movement — remain skeptical.

"Not under Donald Trump, but I do think it will happen under the next president," said Rep. Ted Lieu, a Democrat who represents a coastal stretch of Los Angeles County.

Lieu sought federal investigations during the Obama administration of Exxon Mobil Corp. for its past climate risk disclosures. Last year he hosted a Capitol Hill screening of "Merchants of Doubt," a 2014 documentary that examines public relations strategies charged with casting doubt about the science of man-made climate change (E&E Daily, July 11, 2016).

Lieu told E&E News he thinks a revenue-neutral carbon fee is the "most realistic path forward" for tackling climate at the federal level in the next few years, given the ideological opposition of conservatives to any approach that would expand the size of the government.

But it’s not happening in the near term, he speculated.

The Climate Solutions Caucus, a bipartisan group looking at economically viable adaptation and mitigation solutions, announced yesterday its ranks have grown to include 34 members, evenly split between Democrats and Republicans. Reps. Tom Reed (R-N.Y.) and Anna Eshoo (D-Calif.) are the latest additions.

Rep. Darrell Issa is the caucus’s lone Golden State Republican. After narrowly winning re-election, he joined the caucus in March — a move that turned heads after his strident criticism of U.S. EPA during the Obama administration (Greenwire, March 2).

"Well he’s had a ‘road to Damascus’ experience apparently," joked Rep. Jared Huffman, a Democrat who represents a coastal district between the Golden Gate Bridge and the Oregon border. "Maybe it happened in November — an epiphany."

The difficulty for climate-friendly lawmakers, according to Huffman, is that Republicans are trying to organize "in a way that is very incremental, some might even say tentative, and we need at some point to see if it’s going to translate to any actual results and actions."

Earlier this month, 17 Republicans reintroduced a measure, H. Res. 195, that calls for Congress to recognize the threat climate change poses and commit to acting on it.

Huffman said he’s hopeful that maybe this year those Republicans on the climate resolution "can reach out to the huge number of Democrats that would love to work with them."

Almost a year later, when the House was on the verge of its pre-election adjournment, Curbelo, Gibson and then-Rep. Bob Dold (R-Ill.) joined Deutch and three other Democrats in the climate caucus to introduce H.R. 6240, dubbed the "Climate Solutions Commission Act."

The bill would have established a 10-person commission to undertake a comprehensive review of "economically viable" government and private-sector actions that could reduce emissions (E&E News PM, Sept. 30, 2016). It suggested that goals for cutting greenhouse gas should "reflect the latest scientific findings of what is needed to avoid serious human health and environmental consequences of a changing climate."

Rep. John Delaney (D-Md.), the leading sponsor of the bill, plans to reintroduce it within a couple of months. A spokesman told E&E News yesterday that it would again have bipartisan support.

Those closest to the caucus push back on the idea that vulnerable Republicans are signing up as a way of "greenwashing" their image among moderate constituents.

In the 114th Congress they met with energy companies, businesses and nongovernmental organizations that are working on policies and technology to prepare for and address climate change. They intend to follow the same pattern this Congress, according to a source who was present for the caucus’s initial organizing meeting last week.

"Everyone walked away very excited," said the source, who asked to speak on background about the session.

Pricing carbon could be one of the easiest ways to address climate. It could also pay for the tax code overhaul and $1 trillion infrastructure push Trump has advocated, experts said this week during a forum at the conservative Hoover Institution (Climatewire, March 30).

"No carbon tax is going to come into place over the next three or four years because we want to take action on climate. We’ve got a vehicle on tax reform that, whether it makes it or not we don’t know, but we have incredibly broad-based agreement that somebody ought to do something," said Phil Sharp, a former Indiana congressman who retired last year after 11 years at the helm of energy and environment think tank Resources for the Future.

The Niskanen Center’s Jerry Taylor acknowledged there are probably 40 Republicans in the House and at least 10 in the Senate who are deeply uncomfortable with climate skepticism but disagreed that any action is imminent.

"There is no unity among Republican rebels about what a Republican-branded climate response might look like," Taylor said, pointing to the spectacular collapse of health care legislation in the House. "If the policy stream is not genuinely united in the party over what reform ought to look like, when they have an opportunity to strike they are going to screw it up."

A White House official said last week that the Trump administration is not considering a carbon tax, in response to queries about the ongoing push for a carbon fee and dividend by a group of senior GOP statesmen, including former secretaries of State James Baker and George Shultz (Greenwire, March 22). But optimists note that White House spokesman Sean Spicer has declined to explicitly rule it out on multiple occasions.

Ebell, former head of Trump’s EPA transition team, has warned a carbon tax could become part of a "backroom deal" on any sweeping tax reform package to see whether lawmakers could win approval for the plan as part of a larger tax deal. But Ebell said Trump is solidly against such a proposal.

"It’s an attempt to find Republican standard-bearers to give cover in the House to Democrats for something they know is an election loser," he said of the growing bloc of GOP members who support climate action.

Rep. Jerry McNerney (D-Calif.), another recent addition to the Climate Solutions Caucus, is working on carbon fee and dividend legislation that he hopes to introduce with bipartisan support. In the Senate, Chris Van Hollen (D-Md.) is doing the same.

‘Ready to not be cynical’

Rep. John Garamendi (D-Calif.), a supporter of climate action who has not aligned himself with the Climate Solutions Caucus, said he is optimistic those Republicans who have joined the movement might start to show increased concern for the environment in their voting record.

"As representatives, even those who were opposed to having the discussion on climate change are hearing from their constituents that this is a problem. This is good," Garamendi said.

Asked if he was among the dozen or so Democrats in line waiting for a Republican partner to join the caucus, Garamendi said he was not. "I’m my own caucus of one."

Huffman said he does want to add the caucus to his growing climate portfolio.

"There are so many things looking us right in the eye right now that could get 218 votes and pass if you wanted to start operationalizing this goodwill into action," Huffman observed, citing Clean Air Act waivers for fuel economy standards that appear to be in jeopardy under Trump and funding for climate research.

"I’m ready to not be cynical and actually be collaborative and supportive and actually say great things about this group and their intentions — but it has to be paired with action," Huffman said.