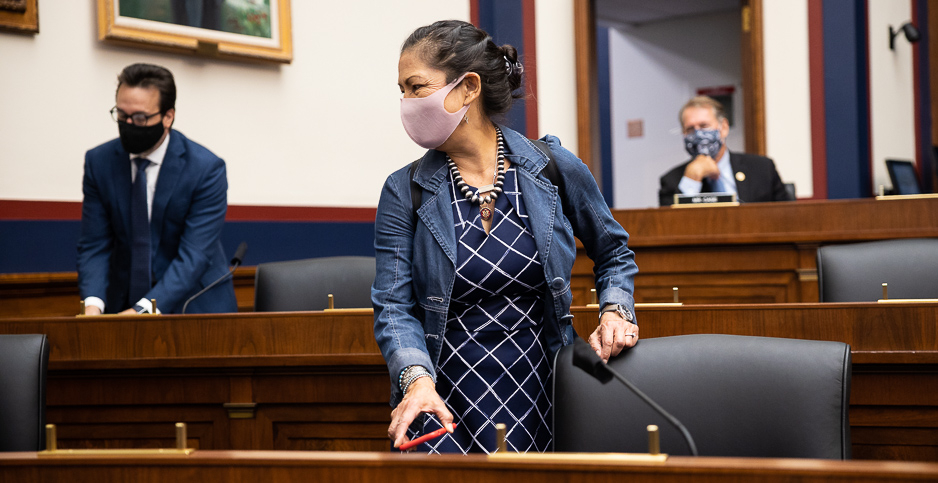 Rep. Deb Haaland will have at least one Republican supporter when the Senate votes to confirm her nomination to lead the Interior Department: moderate Sen. Susan Collins of Maine.

It’s a promising development for the New Mexico Democrat and her allies on the eve of her scheduled confirmation vote inside the Senate Energy and Natural Resources Committee.

It also comes a week after Haaland’s two-day confirmation hearing hardened the extent of GOP opposition to the point where it was not certain whether any Republicans would cross party lines to support her.

Collins announced early this morning that, despite "different views on some issues," she would back Haaland for the Interior secretary position after "examining [her] qualifications, reviewing her [confirmation] hearing … and meeting with her personally."

The Republican cited the nominee’s work last year to pass the Great American Outdoors Act, which will free up millions of dollars for outdoor recreation and conservation initiatives across the country, including in Maine, which is often referred to as "Vacationland."

Collins in a statement noted Haaland’s particular "willingness to support issues important to the State of Maine, such as Acadia National Park," as well as her "deep knowledge of tribal issues, which has earned her the support of tribes across the country, including those in Maine."

Haaland would, if confirmed, be the first Native American Cabinet secretary and the first Indigenous person to preside over the federal agency that has long had a hostile relationship with tribes and tribal lands.

"Representative Haaland promised to be bipartisan in her new role at the Department of the Interior," Collins concluded, "and I look forward to working with her."

Collins’ announcement is the biggest win for Haaland since last week’s pledge of support from Sen. Joe Manchin (D-W.Va.), the chairman of the Energy and Natural Resources Committee who had been relatively cagey until that point about how he might vote.

Manchin’s decision to support Haaland made it certain that she would be able to win confirmation on the Senate floor: Even if every Republican voted "no," all Democrats are expected to band together to vote "yes," with Vice President Kamala Harris providing the 50-50 tiebreaking vote.

But with Collins’ commitment to side with Democrats, it now appears Harris may not even be needed to secure Haaland’s confirmation.

Meanwhile, Collins’ public support for Haaland could break the dam for other Republicans who might be inclined to vote "yes" in the face of overwhelming GOP opposition to a nominee they consider "radical" who won’t appropriately challenge Biden’s executive orders targeting pipeline constructions and oil and gas drilling on federal lands.

The most significant Republican holdout at this point is Sen. Lisa Murkowski of Alaska, who told E&E News today she still has not made up her mind. "I am doing all my homework," she said.

Murkowski added that Collins’ announcement would not affect her decision, even though it would free her from having to be the deciding vote on Haaland’s nomination.

"It might if it was another nominee, but for me, when it comes to the secretary of Interior, this needs to be me being comfortable with an individual who I know I’m going to be working very closely with," Murkowski said. "That’s been the case with every Interior secretary."

The top Senate Republican appropriator overseeing the Interior Department and the ranking member on the Senate Indian Affairs Committee, Murkowski is also a member of the Energy and Natural Resources Committee, so she will have to vote tomorrow on whether to advance Haaland’s nomination to the full Senate. She could, however, still change her vote between committee consideration and floor debate.