Collins to give Supreme Court nominee Jackson a GOP vote 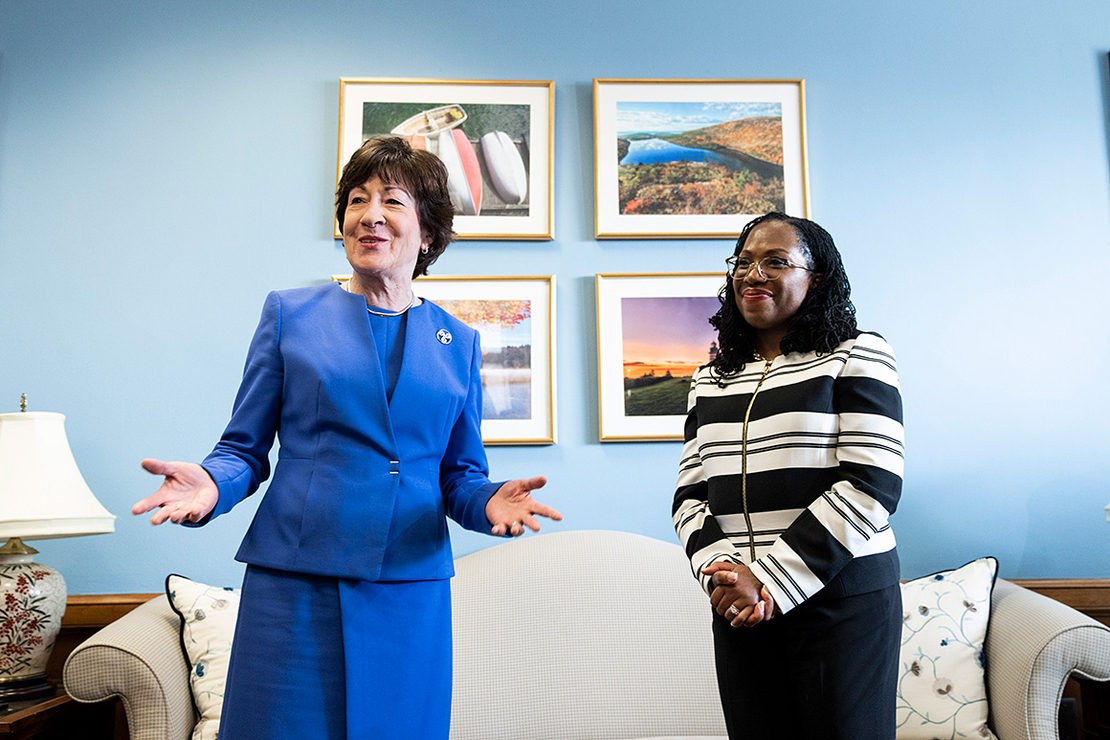 Sen. Susan Collins of Maine said today that she would vote to confirm Ketanji Brown Jackson, ensuring that President Biden’s Supreme Court nominee will get at least one Republican vote.

Collins, who previously voted for Jackson to serve on the U.S. Court of Appeals for the District of Columbia Circuit, said the nominee has the “experience, qualifications and integrity” to be a Supreme Court justice.

The senator said she made her decision after seeing Jackson’s performance in her confirmation hearings and meeting with her twice.

“In my meetings with Judge Jackson, we discussed in depth several issues that were raised in her hearing. Sometimes I agreed with her; sometimes I did not,” Collins said in her statement. “And just as I have disagreed with some of her decisions to date, I have no doubt that, if Judge Jackson is confirmed, I will not agree with every vote that she casts as a Justice.”

Collins continued: “That alone, however, is not disqualifying.”

It’s not yet clear whether Jackson will garner any other Republican votes. Also today Sen. Thom Tillis (R-N.C.), a member of the Judiciary Committee, said he would not vote for the judge.

Collins was one of three GOP lawmakers to support Jackson’s D.C. Circuit confirmation. Sen. Lisa Murkowski of Alaska hasn’t yet announced her decision on Jackson, and Sen. Lindsey Graham of South Carolina appears unlikely to vote for her confirmation (E&E Daily, March 23).

Democrats could have confirmed Jackson without any GOP support, but the margin would have been narrow. The party holds a razor-thin 50-50 majority in the chamber and would have needed Vice President Kamala Harris to serve as a tie-breaking vote.

Sen. Joe Manchin of West Virginia, one of the Senate’s most conservative Democrats, said last week that he would support Jackson’s confirmation, all but guaranteeing her seat on the court (Greenwire, March 25).

Jackson, 51, would be the first Black, female Supreme Court justice and could potentially serve on the bench for decades. She would replace Justice Stephen Breyer, for whom she once clerked, when he retires this summer.

Jackson last week faced two grueling days of questioning by the Senate Judiciary Committee on topics such as her sentencing record in child sex abuse cases, her views on racism education for students in K-12 schools and her approach to deciding cases (E&E Daily, March 24).

“Part of the reason is that, in recent years, the process has increasingly moved away from what I believe to be appropriate for evaluating a Supreme Court nominee,” Collins said.

Jackson has served as a federal judge for nearly a decade and has received bipartisan support in past confirmation votes. The Harvard College and Harvard Law School graduate was previously a member of the U.S. Sentencing Commission, a federal public defender and a private practice attorney.

Like Breyer, Jackson has a reputation as a moderate and pragmatic judge.

The Senate Judiciary Committee is scheduled to vote Monday on whether to favorably report Jackson’s nomination for a full floor vote (E&E Daily, March 29).

Committee lawmakers may deadlock on Jackson, but there is a process in place that would allow the panel to advance her nomination to the Senate floor.

Those procedures haven’t been used for a Supreme Court nominee since the 1800s.

The Judiciary Committee reached a tie vote on Justice Clarence Thomas’ Supreme Court nomination in 1991 but agreed to advance him without a favorable or unfavorable recommendation.

Collins first announced her decision to support Jackson in an interview with The New York Times.