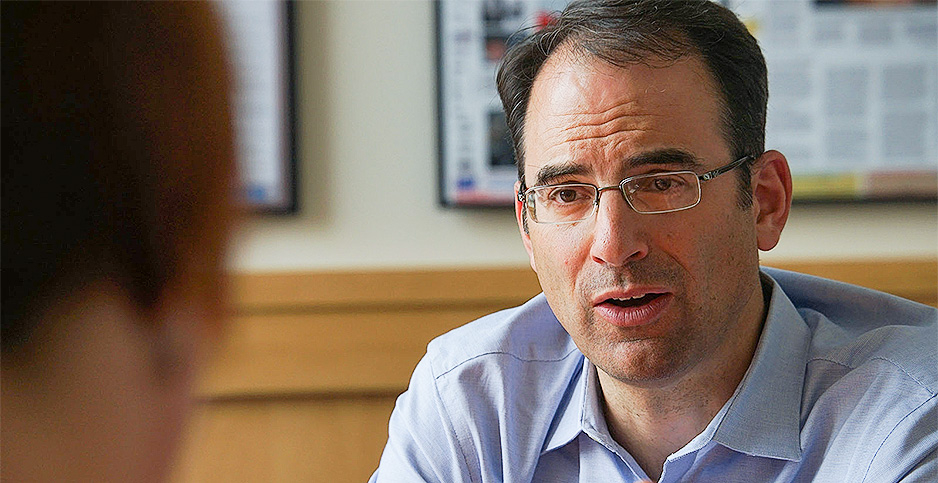 Sure, the Democrat is engaged in dozens of major challenges to President Trump’s agenda and peppers public remarks with criticisms of the administration’s policy choices. But what the newly installed Centennial State lawyer really wants to highlight is cooperative federalism — specifically, how the feds can learn from Colorado.

"What often gets overlooked in talking about the Clean Power Plan or emission rules is how much we’re doing here in Colorado, in what I believe is a model for collaborative policymaking nationwide," he told a room of industry, government and environmental lawyers.

Weiser took over as Colorado’s top lawyer in January, ending years of tension between his predecessor and the governor’s office. Former Attorney General Cynthia Coffman, a Republican, was frequently at odds with then-Gov. John Hickenlooper, a Democrat.

The two offices are now more closely aligned, with Weiser as attorney general and Democrat Jared Polis as governor. One of Weiser’s first moves in office was to withdraw the state from a legal challenge to the Clean Power Plan.

"I would submit that what we saw was not a haircut. It was basically shaving all the hair off," he said. "And the unfortunate piece of this is every country around the world knows the direction we have to go with respect to automobiles. We will be less competitive with our automobile industry if we are not leading a clean energy economy."

The former University of Colorado Law School dean is comfortable back in public service. Weiser worked in the Justice Department’s Antitrust Division during both the Clinton and Obama administrations, and served as a top adviser to President Obama’s National Economic Council.

He sat down with E&E News after his ABA speech last month to discuss his environmental bona fides, fights on the horizon and the power of "Niwot’s curse."

How are you enjoying your transition back into government work?

I am loving being back in government. My heart is in public service. This is what I feel is most meaningful: How do I help leave a better world and help serve the people of Colorado? The difference now is I’m working in state government as opposed to federal government. What is really special about state government is you’re closer to the people you’re serving, and so for me, issues are less abstract. I talked in my speech about water management in the San Luis Valley. I am getting to know people who live in that valley who feel passionately connected to the land, and so working on these issues has a resonance that when you’re at the federal level, it’s not necessarily there.

How long have you lived in Denver? I know you bounced to D.C. for previous jobs.

I moved here in 1994, my first job out of law school, and like many people, I fell in love with Colorado. My daughter reminded me of a concept I often invoke, which is [Southern Arapaho] Chief Niwot reportedly — this is apocryphal — put a curse on the land and said anyone who comes here will be doomed never to want to leave. So I am definitely a beneficiary of Niwot’s curse. And I have spent two times in D.C., in the Clinton administration and the Obama administration.

Tell me about your environmental priorities both at the state level and the national level.

Let me start with a couple of backgrounds on that. In the Obama administration, I worked on a number of issues related to energy innovation and sustainability, most notably including smart grid, where I helped along with Aneesh Chopra, the chief technology officer, architect of the administration’s strategy.

At University of Colorado Law School, where I was the dean, we have a rich and long-standing tradition of leadership in natural resources, energy and environmental law, and that got me more exposed. So I got into this actually having some substantive background, and real mentors like [former dean] David Getches, who was my predecessor, Ricky Revesz, who’s at NYU. Both of them have been real powerful influences on me.

There’s two fronts: One is that we have a chance and an obligation to defend the rule of law, on matters like the Clean Power Plan or the EPA car mileage standards. In both those cases, I believe that our federal government has acted illegally, in ways that hurt Colorado, and in the face of such actions, I have a responsibility and an opportunity to take action.

I also believe deeply that we have to lead here about how we solve problems, both in Colorado, public-sector actors and with the private sector. In the public sector, I mentioned a couple of examples: The big one is water. We have less water on account of climate change and more people. The only way we’re going to work through that is through collaborative problem-solving and coming up with creative solutions, which is indeed the character of Colorado, and one of the best parts of my job is getting to work on those issues.

Do you view yourself as an adversary of the Trump administration? A collaborator in any ways? Does it depend on the issue?

My starting place is always, how can we collaborate together? When we look at issues — PFAS [per- and polyfluoroalkyl substances], for example, we’re developing solutions here in Colorado. I would like nothing better than to have the federal government learn about what we’re doing and adopt them to the extent they make sense. We are working with them. If the federal government’s done something I believe is wrong as a matter of law and the impact on Colorado, then we are duking it out in court.

What are the most important environmental legal battles on the horizon?

The two I mentioned are probably the biggest two: the Clean Power Plan and the EPA car mileage rules. Those are probably the top two happening from a litigation standpoint. But we have a range of challenges: I mentioned water, I mentioned PFAS, I also mentioned solid waste disposal. This is a critical time for collaborative solutions.

One thing I talked about in the speech that’s worth underscoring: The private sector is an increasing engine of innovation and collaborative problem-solving on how do we act more sustainably. And one of the opportunities we have is to partner with the private sector, both encouraging best practice, and where people are being fast and loose — think Volkswagen or Chrysler — we’ve got to come down on them so that we can build public trust that when companies say they’re acting sustainably, they really are.

As the federal fight over clean car rules moves forward, a separate battle is happening at the state level in Colorado as the Colorado Automobile Dealers Association challenges the state’s low-emission vehicle standards. What’s at stake in that litigation?

The state-level one, we represent the state entity [the Department of Public Health and Environment], and I’m pretty comfortable that we’re on good legal footing there. It’s not surprising that there’s some who say, "We’d rather have less oversight than more." But we have air quality oversight, and that’s being exercised, and that’s being defended in court. I’m comfortable that we’re going to prevail in that challenge.

Let’s talk about public lands. Are you concerned about the Trump administration’s efforts to streamline fossil fuel development on federal public lands in Colorado?

When streamline means not engage with the affected communities, I’m really concerned. So one of the questions that’s come up is, will there be oil and gas drilling near the Great Sand Dunes? And we need to look really carefully and at affected communities. Sometimes it’s a fragile ecology. You can say, "Oh, we’re enabling one type of economic development." But at the expense of the outdoor recreation economy or fragile ecosystems, it’s not smart. So we can’t rush into these; we’ve got to be careful.

Boulder, Boulder County and San Miguel County are engaged in climate "nuisance" litigation seeking damages from fossil fuel companies for the impacts of climate change. What are your thoughts on that case and others like it?

I’ve been asked about this before. Here’s what I said then, and it’s still my view. The major reason that we have really reduced our carbon footprint here in Colorado is by moving from coal to natural gas. Given that, it’s not an obvious move that we would hold liable oil and gas producers. Now, there may be unique statutes like the one in New York that give rise to all sorts of different arguments, but from just the standpoint of addressing climate change, the move from coal to natural gas has been part of the Obama administration’s response to climate change. And thus, I’m not sure I follow the logic of that. If I can get convinced that there’s an appropriate response there, I’ll listen to people, but from the face of it, I remain unconvinced.

On a similar note, what about the kids’ climate cases? You had a state-level version in Colorado, and the federal case in Oregon is still going on.

I have not looked at those at all.

Tell me a little about what you do when you’re not working. Do you have time for hobbies anymore?

We are a family of readers, and reading books for pleasure is something that we as a family continue to do. We enjoy visiting different parts of Colorado. That was an opportunity during the campaign trail. I mentioned the Great Sand Dunes; that is not an accident. My kids love going to the Great Sand Dunes. All parts of the state are so beautiful. This weekend we’re going skiing, again part of the beauty of living here in Colorado.

What are some good books you’ve read recently?

I’m reading to my son right now ["The Amazing Adventures of Kavalier & Clay"], which is spectacular. I read with my daughter recently "Dune." I’m a big fan of science fiction/fantasy. We also just saw the recent "Captain Marvel" movie.

Anything else you want to say about your goals during your tenure?

Here’s what I’ll say in the final: We are in a moment where we really need honest conversations that are solutions-oriented. That has been the spirit of Colorado. In this energy, environment, natural resources area, we have more interesting challenges than we’ve ever had before. The only way we’re going to work through them is by getting people to look at the data and come up with solutions. The Colorado water case study I believe is awesome.

If people start paying attention to how we’re solving these issues here on water, that is to my mind the path of what future natural resources collaborative problem-solving can look like.