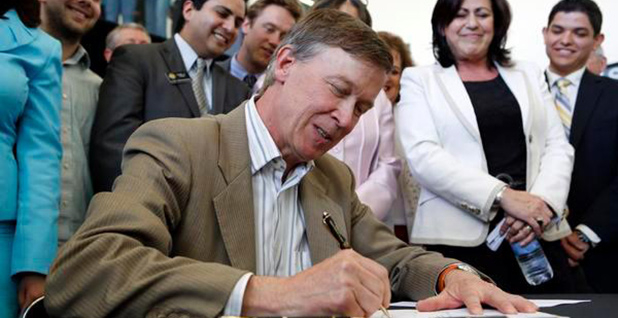 Colorado is considering tougher car rules on greenhouse gas emissions in a rebuke to President Trump as his administration prepares to weaken federal standards on fuel efficiency.

The possible move by Gov. John Hickenlooper, a Democrat who’s seen as a potential candidate for president, suggests that the issue of climate change could be used to challenge Trump in the buildup to a White House race in 2020.

Hickenlooper intends to sign an executive order in the coming days to formally adopt California’s strict car rules, sources told E&E News. Colorado would become the 13th state, plus the District of Columbia, to implement the toughest standards in the nation. The rules cover about 40 percent of the country’s automobiles.

"My current understanding is we’ll do something fairly soon, within the next week," said a source with an environmental group that’s in talks with the governor’s office.

Another source was more cautious. That person said the governor is "considering" the executive order.

The order would make Hickenlooper the latest state leader to defy the Trump administration’s deregulatory agenda. His opposition would be underscored by Colorado’s status as a battleground state that leaned toward Hillary Clinton in the last race for president. She beat Trump by 5 percentage points.

In the near term, the move could increase pressure on the White House to reach a compromise with California and the other states that have adopted its tougher tailpipe rules. Under the Clean Air Act, California can obtain a waiver from EPA to set the stricter mandates.

The move could also have big climate implications. Transportation recently eclipsed the power sector as the country’s largest source of greenhouse gas emissions.

Shelby Wieman, a spokeswoman for Hickenlooper’s office, said in an email to E&E News, "We don’t have anything to announce at this time."

But the governor hinted he had something up his sleeve during a speech Thursday.

"There’s a lot of talk in Washington that they’re going to roll back the low-emission vehicle goals — the high-mileage, high-fuel-efficiency vehicles," Hickenlooper said at an event focused on Colorado’s climate action plan.

"The minute they do that, and maybe just for the heck of it before they do that, maybe tomorrow, who knows, I think we stand ready, and we’re not the only state that says we’re going to stick right with the plan that was already adopted and agreed to by the federal government and planned by California," he said.

"We can do a show of hands. Would you put that in an executive order and do that tomorrow?" Hickenlooper added, prompting cheers from the audience.

Late last month, EPA and the National Highway Traffic Safety Administration sent a proposal for the revised federal standards to the White House Office of Management and Budget (Greenwire, May 31).

The agencies have been tight-lipped, but a leaked EPA draft obtained by E&E News would freeze fuel economy targets at 2020 levels through 2026 (E&E News PM, April 27).

It remains unclear when the proposal will be seen by the public. It’s currently being reviewed by federal officials. That uncertainty has complicated the timing of Hickenlooper’s announcement, said the source at the environmental group.

"It comes down to this dance: Do we wait to respond to the federal rule? Or do we move ahead pre-emptively?" the source said.

Jace Woodrum, a spokesman for Conservation Colorado, said his group has also been in talks with Hickenlooper’s office.

"We have been in conversations with the governor’s office about adopting advanced clean car standards here in Colorado," Woodrum said. "He seems to be really actively thinking about it.

"I would say, too, he’s certainly feeling a lot of pressure as the federal rollback is getting closer," Woodrum added, pointing to an op-ed in Sunday’s Denver Post titled "Colorado should set its own emission standards."

A spokesman for the California Air Resources Board, which is set to meet with the White House this week to discuss the standards, didn’t respond to multiple requests for comment.

Colorado was considered a key battleground state in the 2016 presidential election. Clinton won 48.2 percent of the vote compared with Trump’s 43.3 percent.

"I think Colorado is a purple state that is on the light-blue side of purple these days," said Eric Sondermann, an independent political analyst in Denver. "Sometimes I refer to it as periwinkle blue, not a deep navy or cobalt blue."

Hickenlooper has a complicated track record when it comes to environmental issues.

But in 2014, Hickenlooper sought to block ballot initiatives that aimed to curb hydraulic fracturing in the state, saying they could harm the economy.

"On oil and gas development and fracking, Hickenlooper has not been your typical Democrat. He has been more industry-friendly," Sondermann said. "Even notably early in his term, he did some press conference at which he drank a small cup of fracking fluid as a Hickenlooper-esque demonstration that it’s safe."

Hickenlooper may ultimately have his eye on a 2020 presidential bid, Sondermann said. By adopting California’s fuel efficiency standards, the Democrat could be trying to burnish his green credentials before campaigning in more traditionally blue states, he said.

Not a ‘partisan issue’

If Hickenlooper signs the executive order, it stands to cause sharp contrasts in the energy-rich state. Colorado’s attorney general, Cynthia Coffman, a Republican, didn’t join a recent lawsuit against the Trump administration over its push to loosen the fuel efficiency standards (E&E News PM, May 1).

The suit from 17 states and the District of Columbia, filed on behalf of their attorneys general, alleged that EPA had acted "arbitrarily and capriciously" by deciding to weaken the Obama-era tailpipe rules.

David Hayes, director of the State Energy and Environmental Impact Center at New York University School of Law, wasn’t aware of Hickenlooper’s plans for an executive order. He said it’s possible that Coffman could challenge it in the courts.

"I don’t think this should be a partisan issue, frankly," Hayes said.