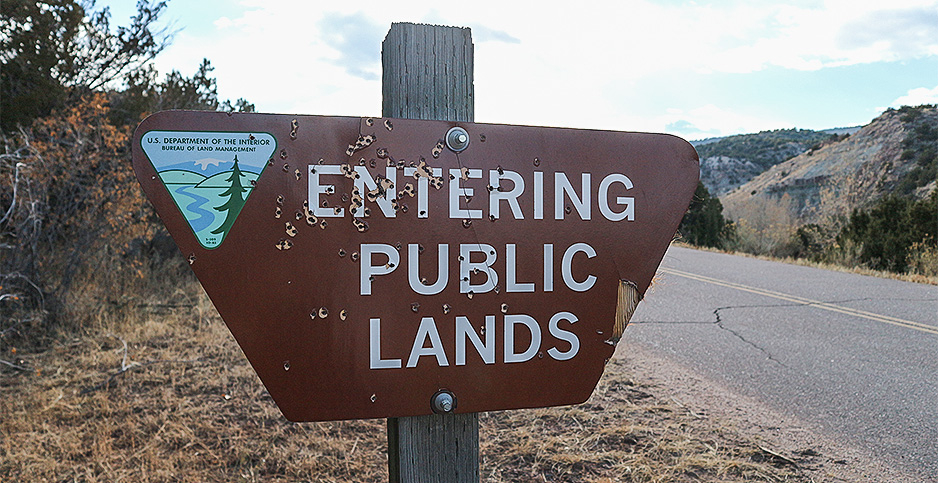 The Bureau of Land Management is considering reopening its Denver office next week. A BLM sign is seen on Colorado public lands. Jennifer Yachnin/E&E News

The Interior Department plans in the next two weeks to reopen offices in Colorado that have been shuttered the past month due to the novel coronavirus.

Interior has already directed the leaders of its bureaus, including the Bureau of Land Management and Bureau of Reclamation, to devise a "draft reconstitution plan" for each agency that would set parameters for bringing employees back to empty offices, according to multiple sources.

The moves follow the issuance of a White House memo yesterday directing federal agencies, including EPA, to develop these plans as the Trump administration works to "ramp back up government operations at the maximum extent possible" (E&E News PM, April 20).

An Interior source that says no firm date has been set in Colorado or elsewhere to start bringing back employees, in phases, and that it will be done differently in each state, depending on whether the number of infections is decreasing and the status of any state orders closing businesses.

But the developing plan to reopen offices in Colorado, particularly at the Denver Federal Center, which houses more than 4,000 Interior Department employees and is managed by the General Services Administration, has raised concern among some employees.

Rumors began circulating this week that employees there could start to return as soon as next Monday.

"My employees are very concerned if we’re told to go back Monday," said a senior Interior official who spoke to E&E News on the condition they not be identified.

The official said there "is a confirmed case" of COVID-19 infection in a Bureau of Reclamation employee in the Denver-area office. E&E News could not independently verify this claim.

Adding to the concern, the official said the General Services Administration "is now telling us we don’t need to deep clean facilities before we return. No one is happy about that."

Colorado Gov. Jared Polis (D) late yesterday announced guidelines for reopening the Centennial State after the stay-at-home order he issued last month expires Sunday. Beginning Monday, child care providers can reopen; retailers would be allowed to reopen Friday, May 1; and most other businesses would be allow to bring back 50% of their staff the following Monday, as long as social distancing and other measures are followed.

"The health and safety of our employees and the public is our top priority," BLM’s Colorado office said in an emailed statement to E&E News.

BLM’s Colorado office has "remained open for business throughout the pandemic," the statement said, "primarily in a telework environment."

"We will be monitoring the Governor’s intent to lift the stay-at-home order and respond accordingly," the statement said.

Colorado will be a big test case for federal government reopening, as it will be one of the first states to do so, and the massive Denver Federal Center is the largest concentration of federal buildings and agencies outside Washington, D.C.

The Denver Federal Center, which is located in the nearby suburb of Lakewood, Colo., covers about 670 acres of federal land and 90 buildings that house employees with about 26 federal agencies, including the Federal Emergency Management Agency.

The Interior Department is the biggest tenant, with roughly 4,700 employees with the Bureau of Land Management, the National Park Service, the U.S. Geological Survey and other bureaus occupying about half the 4 million square feet of office space.

But President Trump has pushed for reopening the country, which has been largely shut down the past two months by the COVID-19 health crisis, causing significant economic harm.

A senior Interior official, who also asked not to be identified, said there are a lot of high-level "discussions" taking place about how and when to get federal employees back into offices nationwide.

The source expressed concerns that the process could become "political" but remained confident the safety and well-being of employees will not be compromised.

"I’m going to do what’s right by my employees and the public," said the source, who vowed that they would "not rush into this for any reason."