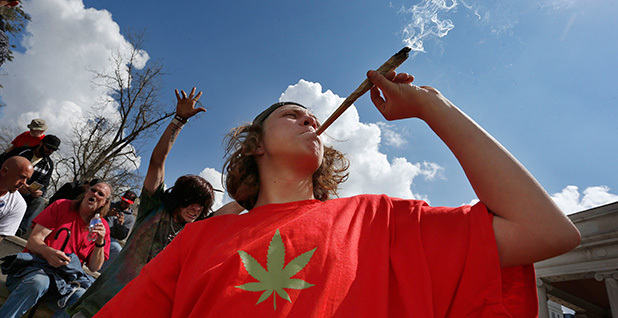 Second of a two-part series on the carbon and energy footprint of Colorado’s marijuana industry. Click here to read the first part.

DENVER — Colorado, which gets 60 percent of its electricity from coal-burning power plants, has set some of the more ambitious greenhouse gas reduction targets in the United States. It wants to cut emissions from its power plants 38 percent by 2030. Denver, its largest city, has a plan to cut 80 percent of all of its emissions by midcentury.

One of the immediate problems of the target-setters, however, is that the state lacks plans from its fastest-growing, most energy-hungry users: owners of indoor marijuana farms.

This city has over 300 of them, from the licensed, cavernous warehouses downtown where workers wear sunglasses and sunblock to prevent damage from banks of 1,000-watt lightbulbs to an unknown number of clandestine "grow houses" in the suburbs, often rented homes whose tenants sometimes hide their massive electricity use by stealing it before it hits their meters.

What’s worrisome about this to Colorado and other states planning to follow its pioneering example by legalizing both medical and recreational marijuana is that the power needs of the industry are helping to push electricity use up, not down.

Last year, Denver announced its plan to accelerate its timetable and cut electricity uses by 7 percent in three years. But then it was informed by the electric utility that serves it, Xcel Energy Inc., that the city’s electricity use was rising by 1.2 percent a year and that 45 percent of that increase appeared to be coming from indoor pot-growing.

That led to the formation of the Cannabis Sustainability Work Group, composed of city officials and representatives from the marijuana-growing industry, to see if something can be done to keep Denver’s greenhouse gas reduction goals from becoming unreachable. Emily Backus, a city Department of Environmental Health official, said the group has met monthly since January. She found the pot growers both interested and wary.

They are interested because electricity is a "huge percentage of their operating costs," explained Backus. They are wary because private consultants who sell them various expensive "energy-saving" lamps for growing marijuana plants "have put a lot of bad products on the market that didn’t produce the yield or the potency that they need."

In the increasingly competitive pot industry that has blossomed here, more growers are moving inside to get the brilliant lighting and controlled temperatures needed to get multiple crops, production that helps them pay their huge electricity bills.

As for potency, Denver growers aim for a product that contains 17 percent tetrahydrocannabinol (THC), the psychoactive drug that produces the high. Some members of Denver’s city council are trying to cap the THC level at 15 percent, but growers of the city’s exotic, genetically modified plants say they need the higher drug potency to remain competitive.

"Growers would be forced to destroy their strains and start over, something that’s not economically or practically feasible," said Michael Elliott, executive director of the Marijuana Industry Group, which functions as its trade association.

By contrast, according to the National Institute on Drug Abuse, which worries about the addictive and mental health problems that stronger pot poses to children and teenagers, the THC content of pot-growing in the 1990s ran around 5 percent.

But producing more potent pot pushed the industry’s electricity use to 2.2 percent of Denver’s energy use in 2014, according to the city. Meanwhile, Denver is trying hard to meet its 2020 sustainability goal, which requires it to cut fossil fuel consumption by 50 percent from 2012 levels.

A commonly discussed energy-reduction remedy would be to require growers to use powerful light-emitting diode (LED) bulbs, but Backus, who is co-chair of the Cannabis Sustainability Work Group, said growers complain that the light from the bulbs doesn’t "produce the potency that the grower is looking for."

The goal of the work group, she explained, is to invite experts from around the United States to a symposium here in October to see how the growers might be able to lower their energy needs. "We want to produce a best practices manual that is free and available to everyone," she said.

Utilities in a ‘gray area’?

The soaring electricity addiction of indoor pot growers is a relatively recent discovery, according to Evan Mills, who did a pioneering study in 2011 that showed that they required 3 percent of California’s electricity and that generating that much power produced greenhouse gas emissions equal to adding 1 million average cars.

The super-bright lights, heavy air conditioning and fans needed to grow the exotic hybrid plants mean that the energy needed to make a marijuana cigarette produces the same amount of emissions that result from keeping a 100-watt lightbulb burning for 25 hours.

Altogether, Mills estimated energy needs of indoor marijuana growers as being equivalent to the consumption of data storage centers, one of the highest-consuming electricity users in U.S. industry. Mills, a senior scientist at the Lawrence Berkeley National Laboratory in California, pointed out that his research on marijuana was unrelated and done for his own energy consulting company.

Another researcher, Gina Warren, a professor at Texas A&M University School of Law, warned that uncontrolled fossil fuel use to grow indoor marijuana has the potential to "completely nullify any previous environmental advancements made under local climate change policies."

Aside from the risk of accelerating global warming, she noted that under federal law, marijuana growing remains illegal. She thinks that means that utilities that provide federally funded incentives to pot growers to reduce their energy use have wandered into a "gray area" in the law.

Most utilities in the United States are required by state public utility commissions to supply electricity indiscriminately to all of their legal customers.

Mark Stutz, a spokesman for Xcel Energy, which supplies electricity to Denver and much of northern Colorado, said that last year, the utility offered $54 million in energy rebates to customers in the state. Less than 0.5 percent went to marijuana growers who either cut their energy use or kept it steady while production demands grew, he said.

"Our programs generally are agnostic toward the industry, as long as they are legally operating entities in the state and can meet qualifications for rebates," he explained. He said Xcel doesn’t reveal the names or energy-use statistics for specific marijuana growers because "that just leads to very long slippery slope that would not make our customers happy."

The promise of LED lightbulbs

Other Colorado jurisdictions have begun wrestling with the problem.

The city of Boulder requires indoor marijuana growers to report their energy use and offset it by buying enough renewable energy to cover their use. Boulder County, which surrounds the city, recently discovered that a 5,000-square-foot indoor marijuana grow house uses six times more electricity than an average commercial business of that size and 49 times more electricity than an average house.

Because the county uses coal-fired power, the "dirtiest source of power," the county noted in a statement, the pot industry "has the potential to have a significant impact with regards to climate change."

So in Boulder County, which has an estimated 15 to 20 licensed commercial growers, they have a choice: They can either offset their electricity by buying renewable energy, or they can pay a fee, based on electricity use. The fees would go to a new fund the county has set up to find and encourage energy-saving practices.

Ron Flax, the county’s building sustainability examiner, hopes to use the money to encourage more experiments with LED bulbs.

"They seem to hold a great deal of promise, but there’s also been a great deal of marketing hype," Flax said. Growers have been experimenting with them, he said, but have had mixed results. Flax says he wants to sponsor more scientifically controlled studies. To make growers more aware of results, he has put electricity-monitoring devices in each grow house.

Flax also makes sure that licensed growers get visits from the county’s building inspectors to make sure their wiring meets county codes. But he admits that the county doesn’t have a good grasp of how many private marijuana grows it might have had where customers are growing marijuana to meet their own medical needs.

That remains a black hole in Boulder County’s campaign to deal with climate change.

"We’ve been talking about that on the planning side, trying to find a way to put some bounds on that problem," Flax explained. "There are many examples where people are taking single-family homes and turning them into a commercial grow operation."